Andrew Lang’s Fairy Books were edited by folklorist Andrew Lang, who is often credited as the author. Lang was a Scottish poet and literary critic who wanted to share English-language fairy tales with the masses. He was inspired by folk tales as a child growing up on the England-Scotland border, and wanted to distribute tales of every type to an audience, even as British fairy tales were declining in popularity. He and his wife, Leonore Blanche Alleyne, worked hard to collect hundreds of tales and gathered an assortment of tales from all regions in a book series known as the Rainbow Fairy Books or Andrew Lang’s Fairy Books, with each being named and designed after a certain color. 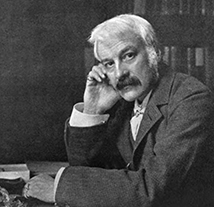 Andrew Lang in his office 1901. Published in “The Critic: An Illustrated Monthly Review of Literature, Art and Life” (1901) G.P. Putnam’s Sons, New York.

437 tales in all were compiled by Lang and his wife in these volumes, and the world was exposed to a new world of fairy tales, many of which they may have never known, if it weren’t for Lang and his wife’s work. In addition, at the time of the first Fairy Book’s publication, fairy tales were actually thought potentially harmful to children, however, the arrival of the Rainbow Fairy Books ended that belief.  The Fairytalez Audio App for Apple and Android devices features many of Andrew Lang’s fairy tales as audiobook.