Folklorist Joseph Jacobs is credited with helping many folk tales be saved from extinction, and he helped popularize many of the tales we still read today, including Goldilocks and the Three Bears. Jacobs edited Folklore, a journal from England’s Folklore Society, and several anthologies. As most of the fairy tale collections available featured tales with German and French origins, he wanted English children to read their own heritage as well. He began collecting English fairy tales, with the first anthology English Fairy Tales, and in 1892, published Celtic Fairy Tales. 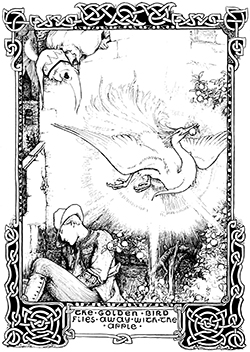 With Celtic Fairy Tales, Jacobs wanted to help preserve the Celtic lore, saying, “The Celtic folk- tales have been collected while the practice of story-telling is still in full vigour, though there are every signs that its term of life is already numbered. The more the reason why they should be collected and put on record while there is yet time.” As he collected the tales for Celtic Fairy Tales, Jacobs didn’t try to retell the stories in plain English, but instead, held their original language as faithfully as possible. One reason, he cited, is because the few words that the reader doesn’t know can add color and enhance the narrative. Celtic Fairy Tales features 26 tales from the Celtic people, with stories of both the natural and the magic. A second volume, More Celtic Fairy Tales, arrived in 1894. Indian Fairy Tales, Joseph Jacobs’ first book of folklore from India, was published in 1910.

The Fairytalez Audio App for Apple and Android devices features several of the author’s fairy tales and folk tales in audiobook.