Australian Legendary Tales is a collection of Australian folklore gathered by the writer K. Langloh Parker. As a writer in New South Wales, she contributed much to the world about the disappearing Australian First Peoples tribes. In Australian Legendary Tales, she gathers the stories of the Narran tribe, who refer to themselves as Noongahburrahs. The need to put together such a collection of these tales was imminent, as many of the tribe’s elders were dying off. Because she had befriended the Narran, they entrusted her to record their myths and legends. As a thanks for sharing their stories, the author would use the book’s proceeds to purchase items as gifts for the tribe. 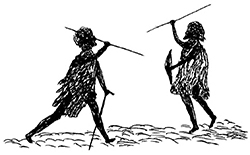 Illustration by Tommy Mcrae from the book Australian Legendary Tales, 1896.