When we think about fairy tales, we often think of the animal characters that are often just as important as the human characters. One particular animal that appears in stories often is the cat. The feline has won its spot in the literary field because of its clever nature, and has appeared in stories from England, Iceland, Germany and many more. “The Marquis gave his hand to the princess, and followed the king, who went up first.” Illustrations by Harry Clarke. Published in The Fairy Tales of Charles Perrault, Charles Perrault (1922), George G. Harrap & Co. LTD.

Cats have popped up in fairy tales, mythology and folklore for centuries. Cats often appear as enchanted royalty, as companions to travelers, and even as main characters in fairy tales. We can find cats in hundreds of fairy tales, and these animals display characteristics similar to those of humans, which makes for a very entertaining read! Here’s a selection of some of the best cat fairy tales that Fairytalez.com has to offer.

The cat lived in a big hole in the trunk some little distance from the ground, where she could sleep very cosily, curled up out of sight with her head resting on her forepaws, feeling perfectly safe from harm.

The Story of Cat, a Mouse, a Lizard and an Owl

This tale was published by author Siddha Mohana Mitra in the collection Hindu Tales from the Sanskrit. Like the rest of the author’s work, this story features several chapters and discussion questions, as the tales were used to teach lessons. The story features a cat needing help from her enemy, the hunter, and entrusting the mouse for help, but the mouse is running from their enemy, the owl. The Indian fairy tale is a 16 minute read for Intermediate readers.

Read The Story of Cat, a Mouse, a Lizard and an Owl.

This Aesop tale features a crew of mice making a plan to place a bell on the cat. The mice want the bell to warn them when the cat approaches. This short tale is at an Intermediate reading level and can be read in only 1 minute. Aesop was a Greek fabulist (author of fables), and cats recurring in his fables. Other fables with cats include The Cat-Maiden and the Fox & the Cat. 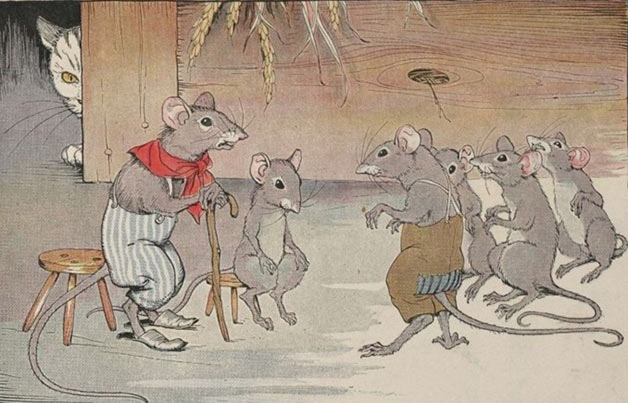 “The mice hold a meeting.” Illustration by Milo Winter. Published in The Aesop for Children, Author Unknown (1919), Rand McNally and Company.

Why Dog and Cat Are Enemies

A Chinese fairy tale, Why Dog and Cat Are Enemies, features a pair of pets trying to work together to help their owners gain good fortune again. The tale was authored by Dr. Richard Wilhelm as part of The Chinese Fairy Book in 1921, and is a 3 minute read at the Easy level.

Read Why Dog and Cat Are Enemies.

This tale concerns two men who found the fortune with cats. It comes to us from Folk-lore and Legends: Scandinavia, which was edited by Charles John Tibbits. How did they get rich from cats? By letting the cats work as mousecatchers, of course! It’s a short Intermediate tale that may be read in 2 minutes.

Andrew Lang published this Icelandic tale in The Brown Fairy Book. The story is one of a princess, a cat, and an enchantment. In this tale, none of the royalty are wicked or cruel, nor is anyone they encounter, but a giant. It’s a 11 minute read that is suitable for Intermediate readers.

The Poor Miller’s Boy and the Cat

The Brothers Grimm published this fairy tale about a boy who serves a tabby cat for seven years in a quest to receive a beautiful horse for his father. He receives something far greater after acting as a helper to this particular feline. You’ll enjoy reading this Intermediate folk tale in only 8 minutes.

Read The Poor Miller’s Boy and the Cat.

The Cat and the Mouse

The cat has the mouse’s tail, but the cat wants some milk. This rhyming story is by Joseph Jacobs and is an English fairy tale. Will the cat get her milk? You’ll have to read to see, because the cow also wants something! The Cat and the Mouse is a fun, Intermediate 5 minute read.

Read The Cat and the Mouse.

The Master Cat, or Puss in Boots

The story of Puss in Boots has been reprinted in fairy tale collections of stories for years, however, the original tale was the work of French author Charles Perrault. The cat in the original story has no name aside from Monsieur Puss, however, many people refer to him as “Puss in Boots” when they tell this story. The 10 minute story is for the Intermediate level.

Read The Master Cat, or Puss in Boots. 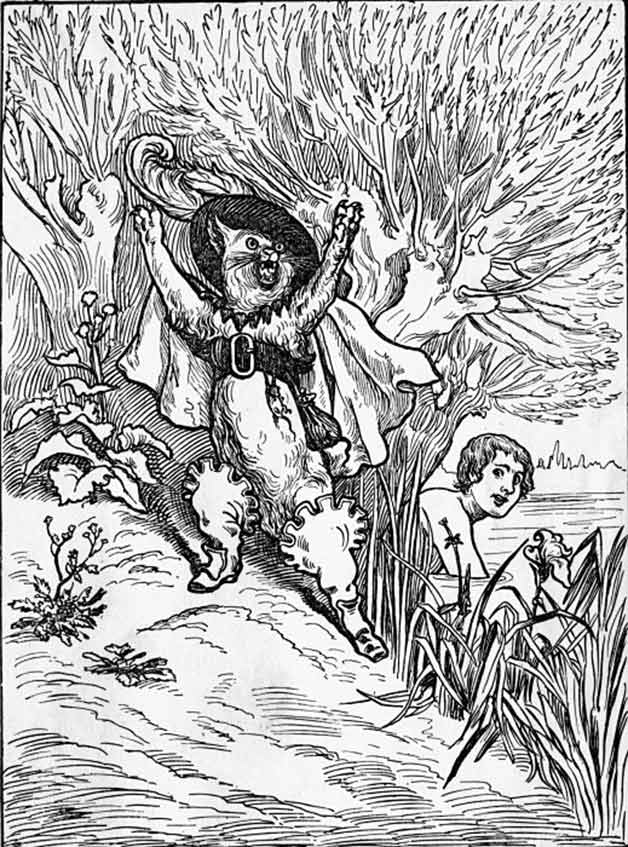 Fairytalez.com has hundreds of other tales featuring all kinds of animals for you to get lost in, and discover. We’ve even recorded several of these cat tales in audiobook for the Fairytalez Audio App. We hope you enjoy this selection of notable cats of fairy tales and folklore!