Author Andrew Lang, noted folklorist and collector of fairy tales, passed away on July 20. As he made a great contribution to the literary world, we decided to give you a brief introduction to Lang and his brilliant collection of stories for children and adults. Author Andrew Lang, noted folklorist and collector of fairy tales, passed away on July 20, 1912. As he made a great contribution to the literary world, we decided to give you a brief introduction to Andrew Lang and his brilliant collection of stories for children and adults.

Who was Andrew Lang?

The oldest of eight children, Andrew Lang was born on March 31, 1844 in Selkirk, in the Scottish borders, Scotland. He was a scholar of religion and folklore, writing on psychical (paranormal) phenomenons, mythology, and folk tales. His name has become synonymous with fairy tales and folklore thanks to his extensive research and publications, including the Fairy Books. The Fairy Books are a series of 12 books, each with a different color. These publications have also been referred to as the “Coloured Fairy Books” and “Andrew Lang’s Fairy Books of Many Colors.” Scholars point out that while his name is all over the series, he was just an editor and collector of the tales. Lang’s wife, Leonora Blanche Alleyne, was his collaborator on the Color Fairy Books, and did a large portion of the work. Many of the stories published in the book series featured their first appearance in the English language, and his wife, along with other translators, retold the stories for young readers.

The Tales in this volume are intended for children, who will like, it is hoped, the old stories that have pleased so many generations.

Lang was inspired to collect the tales because he was fascinated by the tales from his homeland, however, collections of fairy tales published in English were rare. His task wasn’t readily accepted by society, however, as they viewed fairy tales as brutal and harmful to children.

His first book, The Blue Fairy Book, was an instant hit. An initial printing of 5,000 copies at six shillings apiece sold out quickly, and the other books soon followed. Each volume featured whimsical and lavish illustrations by Henry J. Ford (often credited in the books as H.J. Ford); additional illustrators would sometimes contribute their own artwork. Lang passed away in 1912 at the age of 68, but left a lasting legacy in the literary world with his fairy tale collections.

Fairytalez.com has hundreds of Lang’s stories from these collections, and we’ve decided to recommend five stories below.

This French fairy tale is by Madame d’Aulnoy, and was known as The Ram when she wrote it. It and was published in English by Lang and features three king’s daughters. The king fears his daughter may try to make him her slave, and so he banishes her to the forest to be killed, but she meets a magical sheep instead. The tale is an Easy 34 minute read.

An Intermediate level tale from Russia, this story features a king who gets captured by a wicked king and wants his faithful wife to pay the ransom. She disguises herself as a lute player and goes to the wicked to king’s palace to retrieve her husband. There, the wicked king falls in love with her music, and charmed, says she may have a reward for her service. She picks one of his prisoners to keep her company – her husband. The Lute Player may be read in 9 minutes. 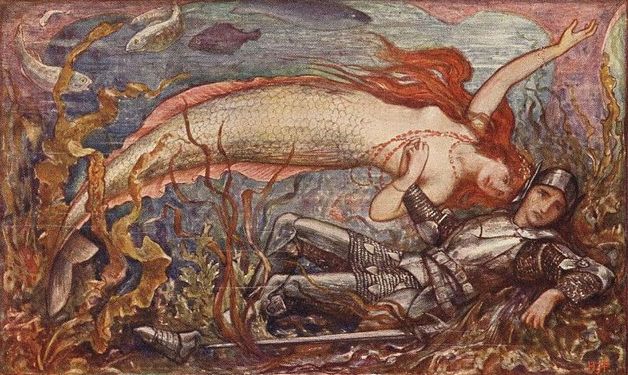 “Listen, listen, said the mermaid to the prince.” Illustration by H.J. Ford. Published in The Brown Fairy Book (1910) Longmans, Green and Co.

The Mermaid and the Boy (The Brown Fairy Book)

A Sami/ Laplander tale, this lively story is an Intermediate read of 24 minutes. The fairy tale concerns a king who is saved by a mermaid during a terrible storm; in return, he must give her his firstborn child. To save their child, the king and queen send him out into the world when he is 16. While he’s out in the world, the young prince receives the ability to transform into multiple animals and uses this skill to woo a princess.

Read The Mermaid and the Boy

Pinkel and the Thief

A 5 minute read at the Intermediate level, Pinkel the Thief was collected from Scandinavian lore. Pinkel is a widow’s son who finds employment as a king’s page and is tasked with stealing a magic gold lantern from a witch. His cleverness and quick thinking helps him get the better of the witch.

Read Pinkel and the Thief

The King of the Waterfalls (The Lilac Fairy Book)

The King of the Waterfalls is a Celtic fairy tale, and Lang credits its source as West Highland Tales. The tale is about the king of Easaidh Ruadh who decides to find amusement by playing a game against a wicked fairy known as the Gruagach. He decides to play a game, and is told to pick three peculiar prizes. This story may be read in 24 minutes.

You’ll find these tales, plus many others from all over the world, in our Andrew Lang collection. We hope you enjoyed these epic and grand tales from Lang’s books.

You can receive a fairy tale every week by signing up for our Weekly Fairy Tale newsletter  – no spam, just tales!