The world of German folklore and fairy tales contains beloved fairy tales like The Piped Piper, or Rumpelstiltskin but what about Germany’s lesser-known stories? The folklore of Germany is vast. Plenty of treasures lie within the collections. "Hannah does not recognize Jem." Illustration by H.J. Ford, published in The Violet Fairy Book by Andrew Lang (1906), Longmans, Green and Co.

The world of German folklore and fairy tales contains beloved fairy tales like The Piped Piper, or Rumpelstiltskin but what about Germany’s lesser-known stories? The folklore of Germany is vast. Plenty of treasures lie within the collections by the Brothers Grimm and other German folklore authors. Fairytalez has been collecting stories from around the world, and you won’t believe what tales you can find here in our German region page.

Ever since the collection of the Brothers Grimm became a household item in the ninetieth century, the Germans have consistently used fairy tales to explain the world to themselves. 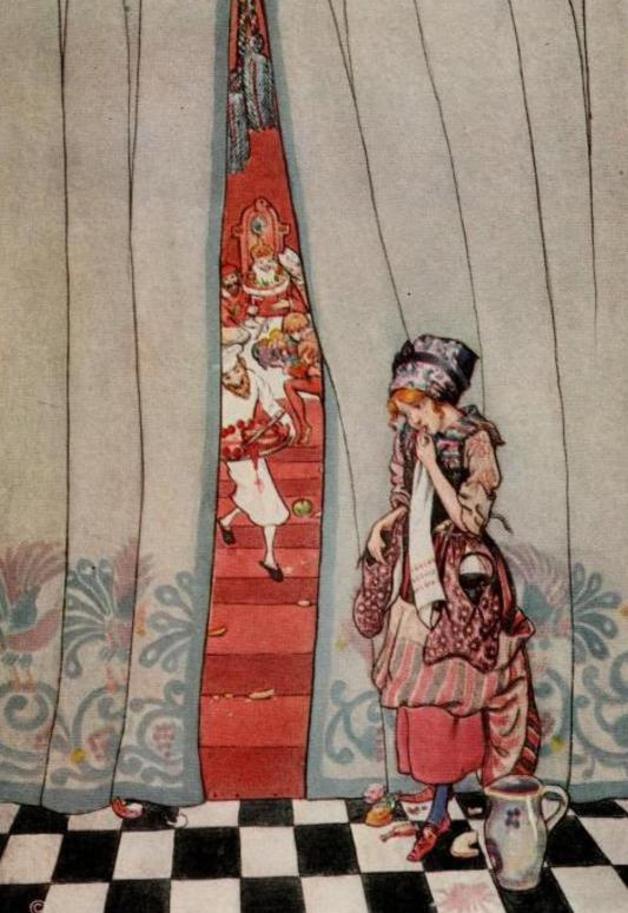 “She thought with a heavy heart of her sad fate.” Illustration by Wuanita Smith, published in Household and Fairy Tales by the Brothers Grimm by Lucy Crane and M. Edwardes (1916), George W. Jacobs & Co, Philadelphia

German Folklore and Tales by the Brothers Grimm

Even the Brothers Grimm have tales that aren’t as well-known as their other stories. Here are several fairy tales you may not know!

King Thrushbeard features the tale of a princess who criticizes her suitors. Her cruelty is punished with a series of ordeals after she names one suitor “King Thrushbeard,” because of the bushiness of his beard. This German folktale is a 5-minute read at the Intermediate level.

A quick read at just 4 minutes, Doctor Know-all is an Intermediate German fairy tale about a peasant who decides to become a doctor. Taking the sarcastic career advice of a doctor, he advertises himself as “Doctor Know-all” and finds his fortune.

The Gold-Children begins with a poor fisherman who finds a gold-fish and after taking the fish’s advice, he is gifted with two gold children. This Intermediate tale may be read in 11 minutes and is one of the lesser-known Grimm works.

Like other German folklore stories, especially those by the Grimms,the Advanced read The Seven Ravens features children turned into birds. Seven brothers turned into ravens are forced to be rescued by their sister after she grows up. She looks for help from the sun, the moon and the morning star.

Folk Tales and Fairy Tales from Other German Storytellers

The book Folk-lore and Legends: German doesn’t have a named author, but its editor Charles John Tibbits certainly gathered some unique pieces of German folklore. Consider the Intermediate read The Elves, which features a collection of elves intimately connected to a household; it’s an interesting sad 5-minute story that is just example of this great collection. 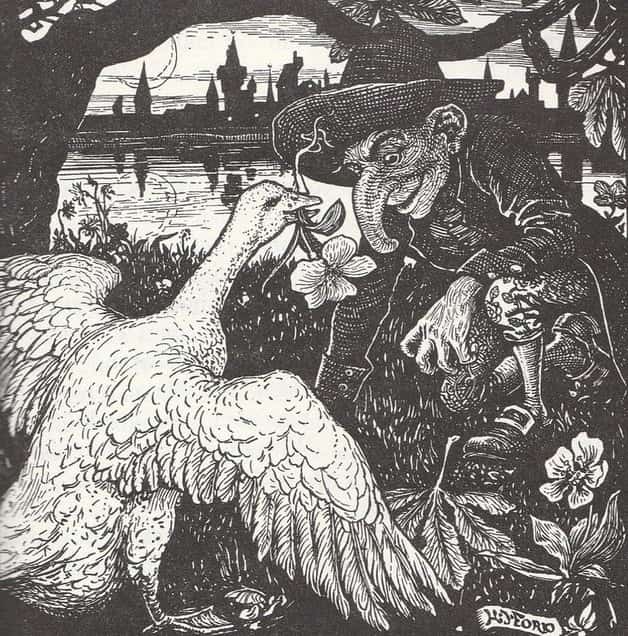 “The goose finds the magic herb.” Illustration by H.J.F old, published in The Violet Fairy Book by Andrew Lang (1910), Longmans, Green and Co.

Wilhelm Hauff was a German folklore author who enjoyed sharing his translated Arabic tales. Hauff published the German fairy tale, The Dwarf Long-Nose, in his collection Fairy Tales and it’s inspired several animated works. This 55-minute Advanced story is an epic tale of a boy who becomes a dwarf after falling under the spell of a woman at the market.

The Princess Who Was Hidden Underground

Andrew Lang collected a variety of fairy tales from around the world, including some German tales not published by the Grimms. One such tale is The Princess Who Was Hidden Underground, a 6-minute Intermediate tale featuring a quest for a princess.

Read The Princess Who Was Hidden Underground

Another Lang story is the 11-minute read Prince Fickle and Fair Helena about a jilted beautiful girl named Helena and the prince who lets her down after he promises to marry her. She seeks a life of a herd-girl and finds her way back to the prince.

If you want to discover even more stories from Germany, visit our German region page. Want even more tales? Sign up for our newsletter and get a new tale from around the world in your inbox every week! We’ve also recorded multiple German fairy tales and folktales in audiobook for the Fairytalez Audio App for Apple and Android devices.

One Response to Get to Know German Folklore: Lesser Known German Tales