Fairytalez.com » Blog » It's in the Bag: Enchanted Bags, Sacks and Knapsacks in Fairy Tales

The world of fairy tales has a list of familiar items that we associate with stories such as golden geese and talking cats, however, there’s another fairy tale item that you may not notice in stories. It’s the magic bag, and it does all kinds of wondrous things.

Brother Lustig at the gates of Heaven after wishing himself into the knapsack. Illustration by Věnceslav Černý from Bruder Lustig by Karel Jaromír Erbe, published 1902.

Fairy tales can involve a trope known as the magic bag. This trope can involve a bag, a sack, a purse or knapsack. It may be used for protection, where the user jumps into the bag to be hidden safely out of sight and unable to be retrieved, or it can supply endless streams of money. In the Aarne-Thompson Folktale Types and Motif Index, the most widely accepted way of classifying fairy tales, these tales featuring a magic bag are known as type 569: the magic object. The theme of kindness being rewarded with a magic object such as a sack is often repeated in fairy tales. Let’s look at several tales where a magic bag plays a central part.

“Faith,” said St. Peter, “the gold will last a long time! In order that after this thou mayst never tread in forbidden paths, I will bestow on thy knapsack this property, namely, that whatsoever thou wishest to have inside it, shall be there. Farewell, thou wilt now never see me more.”

The Magic Bag as a Reward for Kindness in Fairy Tales

Procuring the magic bag is usually the result of a character’s journey, such as the Brothers Grimm story Brother Lustig. Brother Lustig is a soldier who has been dismissed at the end of a war, and encounters St. Peter, who is disguised as a beggar. St. Peter requests help from Brother Lustig on three separate occasions, and the soldier responds by giving him some of what he has, even as he has very little for himself. Later on in their travels, St. Peter bestows magic onto the knapsack that Brother Lustig carries, granting him the power to have whatever he wishes in the bag. If you read the story, you’ll see that this quickly backfires on St. Peter.

The Magic Bag and the Art of Concealment in Fairy Tales

In the above story, the magic bag is used as an object of concealment. This same trope appears in the Irish folk tale Billy Duff and the Devil from author P.H. Emerson’s collection Welsh Fairy-Tales and Other Stories. Billy Duff is given a series of three wishes from a hermit (related reading: see our blog post on the use of three in fairy tales), and one of those wishes is for a purse that no one remove whatever it contains. With it, Billy Duff is able to outwit the devil, and keep his money and anything inside the purse else safe.

In the same vein as Brother Lustig, the Russian folk tale The Soldier and Death translated into English from the Russian by Arthur Ransome, also features a sack given after a soldier gives three forms of aid to be a beggar. The soldier in this tale, however, receives the sack, whereas Brother Lustig already had possession of his sack. After receiving the sack from the beggar, the soldier learns that the sack can be used to convince any bird, beast or anything else to jump into it. The rest of the story involves the devil and the gates of heaven, much as the story of Brother Lustig does, but it has a different ending. 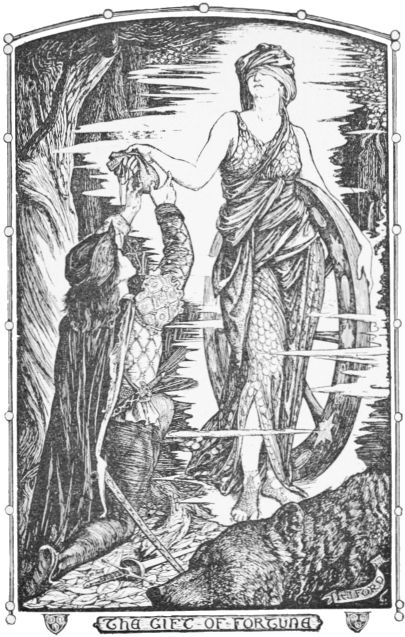 The idea of a magic coin bag or purse has been present in folk tales for quite some time. The tale of Fortunates and His Purse was collected by Andrew Lang for The Grey Fairy Book, published in 1905, but it’s a European folk tale that was reportedly first printed in 1509. Fortunatus is the son of a rich man who quickly squanders his entire fortune, leaving the family penniless. Fortunatus decides to go earn his own fortune, and earns it, then squanders it like his father. He searches for work and along his travels, he meets a fair woman in the woods after killing a bear. She offers him a gift, and he can choose between the following: wisdom, strength, long life, riches, health, or beauty. He chooses wealth, and so he receives a purse that always has 10 pieces of gold, and would continue to replenish itself for both Fortunatus and his children. With this, he lives a charmed and comfortable life for many years.

As you can see, there are many versions of the magic bag in stories, and you may find it in yet even more fairy tales through our website. You can read the ones we’ve discussed below.

The Soldier and Death

Billy Duff and the Devil