Fairytalez.com » Carl Sandburg » How They Broke Away to Go to the Rootabaga Country

So he decided to let his children name themselves.

“The first words they speak as soon as they learn to make words shall be their names,” he said. “They shall name themselves.

When the first boy came to the house of Gimme the Ax, he was named Please Gimme. When the first girl came she was named Ax Me No Questions. And both of the children had the shadows of valleys by night in their eyes and the lights of early morning, when the sun is coming up, on their foreheads. And the hair on top of their heads was a dark wild grass. And they loved to turn the doorknobs, open the doors, and run out to have the wind comb their hair and touch their eyes and put its six soft fingers on their foreheads.

And then because no more boys came and no more girls came, Gimme the Ax said to himself, “My first boy is my last and my last girl is my first and they picked their names themselves.”

Please Gimme -grew up and his ears got longer. Ax Me No Questions grew up and her ears got longer. And they kept on living in the house where everything is the same as it always was. They learned to say just as their father said, “The chimney sits on top of the house and lets the smoke out, the doorknobs open the doors, the windows are always either open or shut, we are always either upstairs or downstairs everything is the same as it always was.”

After a while they began asking each other in the cool of the evening after they had eggs for breakfast in the morning, “Who’s who? How much? And what’s the answer?”

“It is too much to be too long anywhere,” said the tough old man, Gimme the Ax.

And Please Gimme and Ax Me No Questions, the tough son and the tough daughterof Gimme the Ax, answered their father, “It is too much to be too long any where.”

One little sniffer with his eyes half shut and a mitten on his nose, laughed in his hat five waysand said, “They are going to the moon and when they get there they will find everything is the same as it always was.”

All the spot cash money he got for selling everything, pigs, pastures, pepper pickers, pitchforks, Gimme the Ax put in a ragbag and slung on his back like a rag picker going home.

“We wish a ticket to ride where the railroad tracks run off into the sky and never come back send us far as the railroad rails go and then forty ways farther yet,” was the reply of Gimme the Ax.

“So far? So early? So soon?” asked the ticket agent wiping more sleep out his eyes. “Then I will give you a new ticket. It blew in. It is a long slick yellow leather slab ticket with a blue spanch across it.” 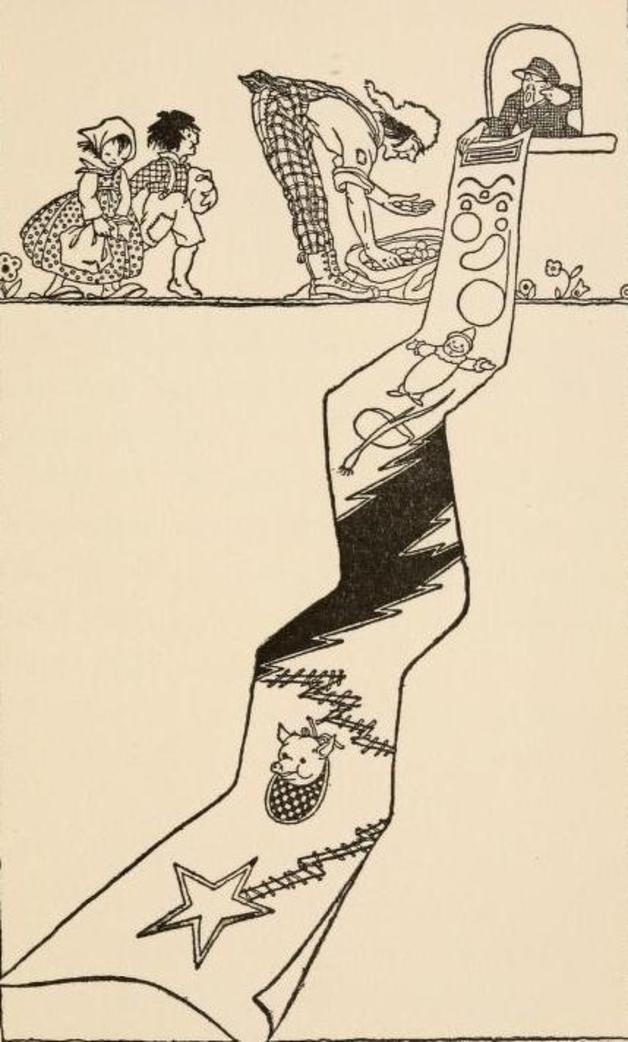 “He opened the ragbag and took out all the spot cash money.” Illustration by Maud and Miska Petersham. Published in Rootabaga Stories. 1922. Harcourt, Brace and Company.

Before he put it in his pocket he looked once, twice, three times at the long yellow leather slab ticket with a blue spanch across it. Then with Please Gimme and Ax Me No Questions he got on the railroad train, showed the conductor his ticket and they started to ride to where the railroad tracks run off into the blue sky and then forty ways farther yet.

“Not even the Kings of Egypt with all their climbing camels, and all their speedy, spotted, lucky lizards, ever had a ride like this,” he said to his children.

Then something happened. They met another train running on the same track. One train was going one way. The other was going the other way. They met. They passed each other.

“What was it what happened?” the children asked their father.

“One train went over, the other train went under,” he answered. “This is the Over and Under country. Nobody gets out of the way of anybody else. They either go over or under.”

Next they came to the country of the balloon pickers. Hanging down from the sky strung on strings so fine the eye could not see them at first, was the balloon crop of that summer. The sky was thick with balloons. Red, blue, yellow balloons, white, purple and orange balloons peach, watermelon and potato balloons rye loaf and wheat loaf balloons link sausage and pork chop balloons they floated and filled the sky.

Baby pickers on baby stilts were picking baby balloons. When they fell off the stilts, the handful of balloons they were holding kept them in the air till they got their feet into the stilts again.

“Who is that away up there in the sky climbing like a bird in the morning?” Ax Me No Questions asked her father.

“He was singing too happy,” replied the father. “The songs came out of his neck and made him so light the balloons pulled him off his stilts.”

“Will he ever come down again back to his own people?”

“Yes, his heart will get heavy when his songs are all gone. Then he will drop down to his stilts again.”

The train was running on and on. The engineer hooted and tooted the whistle when he felt like it. The fireman rang the bell when he felt that way. And sometimes the open-and-shut of the steam hog had to go pfisty- pfoost, pfisty-pfoost.

“Next is the country where the circus clowns come from,” said Gimme the Ax to his son and daughter. “Keep your eyes open.”

They did keep their eyes open. They saw cities with ovens, long and short ovens, fat stubby ovens, lean lank ovens, all for baking either long or short clowns, or fat and stubby or lean and lank clowns.

After each clown was baked in the oven it was taken out into the sunshine and put up to stand like a big white doll with a red mouth leaning against the fence.

Two men came along to each baked clown standing still like a doll. One man threw a bucket of white fire over it. The second man pumped a wind pump with a living red wind through the red mouth.

The clown rubbed his eyes, opened his mouth, twisted his neck, wiggled his ears, wriggled his toes, jumped away from the fence and began turning handsprings, cartwheels, somersaults and flipflops in the sawdust ring near the fence.

“The next we come to is the Rootabaga Country where the big city is the Village of Liver-and-Onions,” said Gimme the Ax, looking again in his pocket to be sure he had the long slick yellow leather slab ticket with a
blue spanch across it.

“It seems like we go half way and then back up,” said Ax Me No Questions.

“Look out of the window and see if the pigs have bibs on,” said Gimme the Ax. “If the pigs are wearing bibs then this is the Rootabaga country.”

“Who fixes it for the pigs to have bibs on?” Please Gimme asked his father.

And the train went zigzagging on and on running on the tracks and the rails and the spikes and the ties which were all zigzag like the letter Z and the letter Z.

And after a while the train zigzagged on into the Village of Liver-and-Onions, known as the biggest city in the big, big Rootabaga country.

And so if you are going to the Rootabaga country you will know when you get there be- cause the railroad tracks change from straight to zigzag, the pigs have bibs on and it is the fathers and mothers who fix it.

And if you start to go to that country remember first you must sell everything you have, pigs, pastures, pepper pickers, pitchforks, put the spot cash money in a ragbag and go to the railroad station and ask the ticket agent for a long slick yellow leather slab ticket with a blue spanch across it.And you mustn’t be surprised if the ticket agent wipes sleep from his eyes and asks, “So far? So early? So soon? “

How the World Was Made

How the World Was Made