Now it chanced many years since that there lived on the Borders a jolly rattling horse-cowper, who was remarkable for a reckless and fearless temper, which made him much admired and a little dreaded amongst his neighbours. One moonlight night, as he rode over Bowden Moor, on the west side of the Eildon Hills, the scene of Thomas the Rhymer’s prophecies, and often mentioned in his history, having a brace of horses along with him, which he had not been able to dispose of, he met a man of venerable appearance and singularly antique dress, who, to his great surprise, asked the price of his horses, and began to chaffer with him on the subject. To Canobie Dick, for so shall we call our Border dealer, a chap was a chap, and he would have sold a horse to the devil himself, without minding his cloven hoof, and would have probably cheated Old Nick into the bargain. The stranger paid the price they agreed on, and all that puzzled Dick in the transaction was, that the gold which he received was in unicorns, bonnet-pieces, and other ancient coins, which would have been invaluable to collectors, but were rather troublesome in modern currency. It was gold, however, and therefore Dick contrived to get better value for the coin than he perhaps gave to his customer. By the command of so good a merchant, he brought horses to the same spot more than once; the purchaser only stipulating that he should always come by night and alone. I do not know whether it was from mere curiosity, or whether some hope of gain mixed with it, but after Dick had sold several horses in this way, he began to complain that dry bargains were unlucky, and to hint, that since his chap must live in the neighbourhood, he ought, in the courtesy of dealing, to treat him to half a mutchkin.

“You may see my dwelling if you will,” said the stranger; “but if you lose courage at what you see there, you will rue it all your life.”

Dickon, however, laughed the warning to scorn, and having alighted to secure his horse, he followed the stranger up a narrow footpath, which led them up the hills to the singular eminence stuck betwixt the most southern and the centre peaks, and called, from its resemblance to such an animal in its form, the Lucken Hare. At the foot of this eminence, which is almost as famous for witch-meetings as the neighbouring windmill of Kippilaw, Dick was somewhat startled to observe that his conductor entered the hillside by a passage or cavern, of which he himself, though well acquainted with the spot, had never seen nor heard.

“You may still return,” said his guide, looking ominously back upon him; but Dick scorned to show the white feather, and on they went. They entered a very long range of stables; in every stall stood a coal-black horse; by every horse lay a knight in coal-black armour, with a drawn sword in his hand; but all were as silent, hoof and limb, as if they had been cut out of marble. A great number of torches lent a gloomy lustre to the hall, which, like those of the Caliph Vathek, was of large dimensions. At the upper end, however, they at length arrived, where a sword and horn lay on an antique table.

“He that shall sound that horn and draw that sword,” said the stranger, who now intimated that he was the famous Thomas of Ercildoun, “shall, if his heart fail him not, be king over all broad Britain. So speaks the tongue that cannot lie. But all depends on courage, and much on your taking the sword or horn first.” 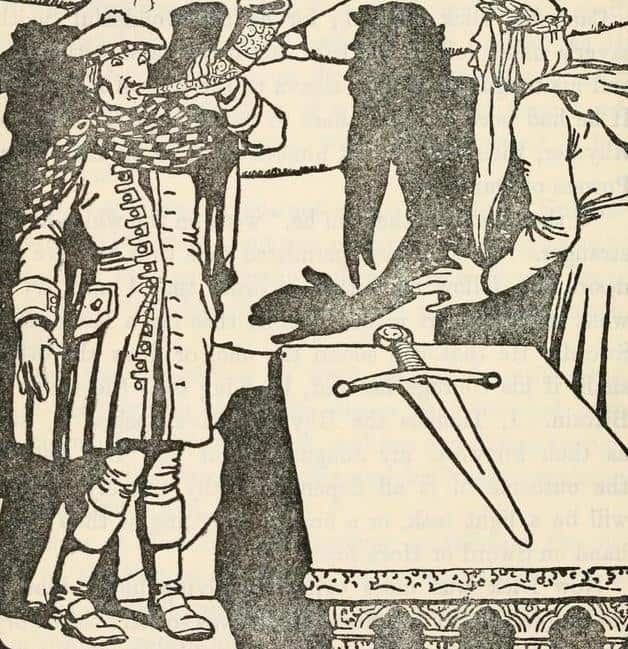 “He took the bugle with a trembling hand, and blew a feeble note, but loud enough to produce a terrible answer.” Illustration by Morris Meredith Wilson, published in The Scottish Fairy Book by Elizabeth Grierson (1910), Frederick A. Stokes Company.

Dick was much disposed to take the sword, but his bold spirit was quailed by the supernatural terrors of the hall, and he thought to unsheathe the sword first might be construed into defiance, and give offence to the powers of the mountain. He took the bugle with a trembling hand, and blew a feeble note, but loud enough to produce a terrible answer. Thunder rolled in stunning peals through the immense hall; horses and men started to life; the steeds snorted, stamped, ground their bits, and tossed their heads; the warriors sprang to their feet, clashed their armour, and brandished their swords. Dick’s terror was extreme at seeing the whole army, which had been so lately silent as the grave, in uproar, and about to rush on him. He dropped the horn, and made a feeble attempt to seize the enchanted sword; but at the same moment a voice pronounced aloud the mysterious words—

“Woe to the coward, that ever he was born,
Who did not draw the sword before he blew the horn!”

At the same time a whirlwind of irresistible fury howled through the long hall, bore the unfortunate horse-jockey clear out of the mouth of the cavern, and precipitated him over a steep bank of loose stones, where the shepherds found him the next morning, with just breath sufficient to tell his fearful tale, after concluding which he expired.