Fairytalez.com » A Treasury of Eskimo Tales » Chunks of Daylight

At the northern part of the continent, in the land of the midnight sun, where in the long summer days the sun at midnight is just slipping below the northern horizon and immediately is seen coming up again, and where in the long nights of winter there is scarcely any daytime at all, it is not strange that the legends of the people often treat of daylight and especially of darkness. The long nights become oppressive, and the people have different theories as to the cause of it, which they weave into legends such as the following.

In the days when the earth was a child, there was light from the sun and moon as there is now. Then the sun and moon were taken away and the people were left for a long time with no light but the shining of the stars. The shamans, or priests, made their strongest charms to no purpose, for the darkness of night continued.

In a village of the lower Yukon there lived an orphan boy who always sat upon the bench with the humble people, over the entrance way of the kashim or assembly house. The other people thought he was foolish, and he was despised and ill-treated by everyone. After the shamans had tried very hard to bring back the sun and moon and had failed, the boy began to ridicule them.

“What fine shamans you must be, not to be able to bring back the light, when even I can do it,” he said mockingly.

“Tell me where the sun and moon have gone, for I am going after them,” said he.

“They are hidden somewhere, but I don’t know where it is,” she replied.

“I am sure you know where they are, for look what a neatly sewed coat you wear, and you could not see to do that if you did not know where the light is.”

After a great deal of persuasion the aunt said: “Well, if you wish to find the light you must take your snowshoes and go far, far to the southland, to the place you will know when you get there.”

The boy put on his black coat, took his snowshoes, and at once set off for the south. For many days he traveled, while the darkness always remained the same. When he had gone a very long way, he saw far ahead of him a single ray of light, and that cheered and encouraged him.

As he hurried on, the light showed again plainer than before and then vanished; and kept appearing and vanishing at intervals. At last he came to a large hill, one side of which was in a bright light while the other was in the blackness of night. Ahead of him and close to the hill he saw a hut with a man who was shoveling snow from the front of it.

The man was tossing the snow high in air, and each time he did this the light was hidden, thus causing the changes from light to darkness which the boy had noticed as he approached. Close beside the house he saw a great blazing ball of fire—the light he had come to find.

The boy stopped and began to plan how he could secure the light and the shovel from the man. After a time he walked up to the man and asked, “Why are you throwing up the snow and hiding the light from our village?”

The man stopped his work, looked up and said, “I am only clearing away the snow from my door. I am not hiding the light. But who are you, and where do you come from?”

“It is so dark at our village that I did not like to live there, so I came here to live with you,” said the boy.

“What? Will you stay all the time?” asked the man in surprise.

“That is well; come into the house with me,” said the man.

He dropped his shovel on the ground and, stooping down, led the way into the underground passage to the house, letting the curtain fall in front of the door as he passed, for he thought the boy was close behind him. 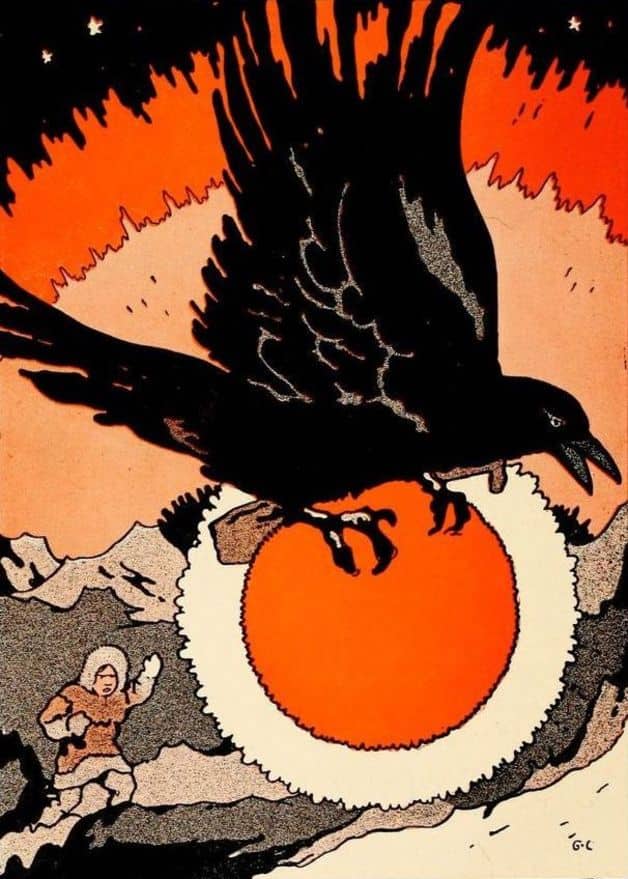 “He whipped on his magic coat and became a raven and flew as fast as his wings would carry him.” Illustration by George Carlson, published in A Treasury of Eskimo Tales by Clara Kern Bayliss (1922), Thomas Y. Crowell Company.

The moment the door flap fell behind the man as he entered, the boy caught up the ball of light and put it in the turned-up flap of his fur coat in front. Catching up the shovel in one hand, he ran away to the north, running until his feet became tired. Then he whipped on his magic coat and became a raven and flew as fast as his wings would carry him. Behind he heard the frightful shrieks and cries of the old man, following fast in pursuit.

When the old man found that he could not overtake the raven he cried to him, “Never mind; you may keep the light, but give me my shovel.”

“No; you made our village dark and you cannot have the shovel,” called the raven, and flew faster, leaving the man far in the rear.

As the raven boy traveled home, he tore out a chunk from the light ball and threw it away, thus making a day. Then he went on for a long way in the darkness, and threw out another piece of light, making it day again. He continued to do this at intervals until he reached the kashim in his own village, where he dropped the rest of the ball.

Then he went into the kashim and said, “Now, you worthless shamans, you see I have brought back the light, and hereafter it will be light and then dark, making day and night.”

And the shamans could not answer.

Why the Moon Waxes and Wanes

Why the Moon Waxes and Wanes