Now listen. Out in the country, close by the roadside, stood a pleasant house; you have seen one like it, no doubt, very often. In front lay a little fenced-in garden, full of blooming flowers. Near the hedge, in the soft green grass, grew a little daisy. The sun shone as brightly and warmly upon her as upon the large and beautiful garden flowers, so the daisy grew from hour to hour. Every morning she unfolded her little white petals, like shining rays round the little golden sun in the center of the flower. She never seemed to think that she was unseen down in the grass or that she was only a poor, insignificant flower. She felt too happy to care for that. Merrily she turned toward the warm sun, looked up to the blue sky, and listened to the lark singing high in the air.

One day the little flower was as joyful as if it had been a great holiday, although it was only Monday. All the children were at school, and while they sat on their benches learning their lessons, she, on her little stem, learned also from the warm sun and from everything around her how good God is, and it made her happy to hear the lark expressing in his song her own glad feelings. The daisy admired the happy bird who could warble so sweetly and fly so high, and she was not at all sorrowful because she could not do the same.

“I can see and hear,” thought she; “the sun shines upon me, and the wind kisses me; what else do I need to make me happy?”

Within the garden grew a number of aristocratic flowers; the less scent they had the more they flaunted. The peonies considered it a grand thing to be so large, and puffed themselves out to be larger than the roses. The tulips knew that they were marked with beautiful colors, and held themselves bolt upright so that they might be seen more plainly.

They did not notice the little daisy outside, but she looked at them and thought: “How rich and beautiful they are! No wonder the pretty bird flies down to visit them. How glad I am that I grow so near them, that I may admire their beauty!”

Just at this moment the lark flew down, crying “Tweet,” but he did not go to the tall peonies and tulips; he hopped into the grass near the lowly daisy. She trembled for joy and hardly knew what to think.

The little bird hopped round the daisy, singing, “Oh, what sweet, soft grass, and what a lovely little flower, with gold in its heart and silver on its dress!” For the yellow center in the daisy looked like gold, and the leaves around were glittering white, like silver.

How happy the little daisy felt, no one can describe. The bird kissed her with his beak, sang to her, and then flew up again into the blue air above. It was at least a quarter of an hour before the daisy could recover herself. Half ashamed, yet happy in herself, she glanced at the other flowers; they must have seen the honor she had received, and would understand her delight and pleasure.

But the tulips looked prouder than ever; indeed, they were evidently quite vexed about it. The peonies were disgusted, and could they have spoken, the poor little daisy would no doubt have received a good scolding. She could see they were all out of temper, and it made her very sorry.

At this moment there came into the garden a girl with a large, glittering knife in her hand. She went straight to the tulips and cut off several of them. 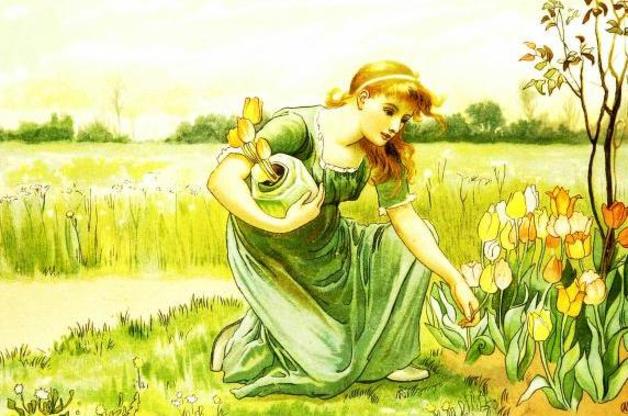 “The girl carried away the tulips.” Illustration by Alice Havers. Published in The White Swans and Other Tales(1885). E.P. Dutton and Company

“O dear,” sighed the daisy, “how shocking! It is all over with them now.” The girl carried the tulips away, and the daisy felt very glad to grow outside in the grass and to be only a poor little flower. When the sun set, she folded up her leaves and went to sleep. She dreamed the whole night long of the warm sun and the pretty little bird.

The next morning, when she joyfully stretched out her white leaves once more to the warm air and the light, she recognized the voice of the bird, but his song sounded mournful and sad.

Alas! he had good reason to be sad: he had been caught and made a prisoner in a cage that hung close by the open window. He sang of the happy time when he could fly in the air, joyous and free; of the young green corn in the fields, from which he would spring higher and higher to sing his glorious song—but now he was a prisoner in a cage.

The little daisy wished very much to help him. But what could she do? In her anxiety she forgot all the beautiful things around her, the warm sunshine, and her own pretty, shining, white leaves. Alas! she could think of nothing but the captive bird and her own inability to help him.

Two boys came out of the garden; one of them carried a sharp knife in his hand, like the one with which the girl had cut the tulips. They went straight to the little daisy, who could not think what they were going to do.

“We can cut out a nice piece of turf for the lark here,” said one of the boys; and he began to cut a square piece round the daisy, so that she stood just in the center.

“Pull up the flower,” said the other boy; and the daisy trembled with fear, for to pluck her up would destroy her life and she wished so much to live and to be taken to the captive lark in his cage.

“No, let it stay where it is,” said the boy, “it looks so pretty.” So the daisy remained, and was put with the turf in the lark’s cage. The poor bird was complaining loudly about his lost freedom, beating his wings against the iron bars of his prison. The little daisy could make no sign and utter no word to console him, as she would gladly have done. The whole morning passed in this manner.

“There is no water here,” said the captive lark; “they have all gone out and have forgotten to give me a drop to drink. My throat is hot and dry; I feel as if I had fire and ice within me, and the air is so heavy. Alas! I must die. I must bid farewell to the warm sunshine, the fresh green, and all the beautiful things which God has created.”

And then he thrust his beak into the cool turf to refresh himself a little with the fresh grass, and, as he did so, his eye fell upon the daisy. The bird nodded to her and kissed her with his beak and said: “You also will wither here, you poor little flower! They have given you to me, with the little patch of green grass on which you grow, in exchange for the whole world which was mine out there. Each little blade of grass is to me as a great tree, and each of your white leaves a flower. Alas! you only show me how much I have lost.”

“Oh, if I could only comfort him!” thought the daisy, but she could not move a leaf. The perfume from her leaves was stronger than is usual in these flowers, and the bird noticed it, and though he was fainting with thirst, and in his pain pulled up the green blades of grass, he did not touch the flower.

The evening came, and yet no one had come to bring the bird a drop of water. Then he stretched out his pretty wings and shook convulsively; he could only sing “Tweet, tweet,” in a weak, mournful tone. His little head bent down toward the flower; the bird’s heart was broken with want and pining. Then the flower could not fold her leaves as she had done the evening before when she went to sleep, but, sick and sorrowful, drooped toward the earth.

Not till morning did the boys come, and when they found the bird dead, they wept many and bitter tears. They dug a pretty grave for him and adorned it with leaves of flowers. The bird’s lifeless body was placed in a smart red box and was buried with great honor.

Poor bird! while he was alive and could sing, they forgot him and allowed him to sit in his cage and suffer want, but now that he was dead, they mourned for him with many tears and buried him in royal state.

But the turf with the daisy on it was thrown out into the dusty road. No one thought of the little flower that had felt more for the poor bird than had any one else and that would have been so glad to help and comfort him if she had been able.