Once upon a time, a prince called D. Joaõ went hunting with a number of companions. In the deep forest he became separated from his comrades and soon found out that he was lost. He wandered about for a long time, and at last he spied what looked like a mountain range in the distance. He journeyed toward it as fast as he could travel, and when he got near to it he was surprised to find out that it was really a high wall. It was the great wall which bounds the land of the giants. The ruler of the country was an enormous giant whose head reached almost to the clouds. The giant’s wife was nearly as enormous as he was, and their only child was as tall as her mother. Her name was Guimara.

When the giant saw D. Joaõ he called out, “O, little man, what are you doing down there?” D. Joaõ narrated his adventures to the giant, and the giant said, “Your story of your wanderings interests me. It is not often that little men like you pass this way. If you like you may live in my palace and be my servant.” D. Joaõ accepted the giant’s offer and stayed at the palace. 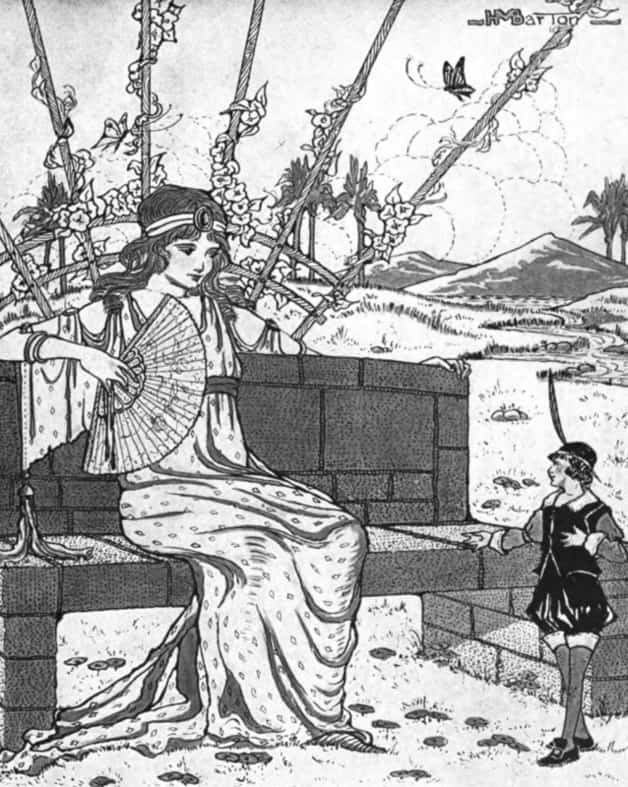 “The giant’s daughter Guimara was very much pleased with D. Joaõ.” Illustration by Helen Barton, published in Tales of Giants from Brazil by Elsie Spicer Eells (1918), Dodd, Mead, and Company.

The giant’s daughter Guimara was very much pleased with D. Joaõ. He was the first little man she had ever seen. She fell deeply in love with him. Her father, however, was very much disgusted at her lack of good taste. He preferred to have a giant for a son-in-law. Accordingly he thought of a plot to get D. Joaõ into trouble.

The next day he sent for D. Joaõ to appear before him. “O little man,” he said to him, “they tell me that you are very proud of yourself and that you are boasting among my servants that you are able to tear down my palace in a single night and set it up again as quickly as you tore it down.”

“I never have made any such boast, your majesty,” replied D. Joaõ.

He went to Guimara and told her about it. “I am an enchantress,” said Guimara. “Leave it to me and we will surprise my father.”

The very next night Guimara and D. Joaõ tore down the giant’s palace and set it up again exactly as it was before. The giant was greatly surprised. He suspected that his daughter had meddled with the affair.

The next day he sent for D. Joaõ and said to him, “O little man, they tell me that you say that in a single night you are able to change the Isle of Wild Beasts into a beautiful garden full of all sorts of flowers and with a silvery fountain in the centre.”

“I never said any such thing, your majesty,” replied D. Joaõ.

He told Guimara about it, and she said that it would be great fun to escape from her room that night and make over the Isle of the Wild Beasts into a lovely garden.

Accordingly Guimara worked hard all night long helping D. Joaõ to make the Isle of the Wild Beasts over into a garden full of all sorts of beautiful flowers and with a silvery fountain in the centre. The king was greatly surprised to see the garden in the morning and he was very angry at Guimara and D. Joaõ.

Guimara was so frightened at her father’s terrible wrath that she decided to run away with D. Joaõ. She counselled him to procure the best horse from her father’s stable for them to ride.

At midnight Guimara crept out of her room and ran to the place where D. Joaõ was waiting for her with the horse, which travelled one hundred leagues at each step. They mounted the horse and rode away.

Early the next morning the princess Guimara was missed from the royal palace. Soon it was discovered that D. Joaõ was gone too, and also the best horse from the stables. The giant talked over the matter with his wife. She told him to take another horse which could travel a hundred leagues a step and go after them as fast as he could. The giant followed his wife’s advice, and soon he had nearly caught up with the fugitives, for they had grown tired and had stopped to rest.

Guimara spied her father coming and turned herself into a little river. She turned D. Joaõ into an old negro, the horse into a tree, the saddle into a bed of onions, and the musket they carried into a butterfly.

When the giant came to the river he called out to the old negro who was taking a bath, “O, my old negro, have you seen anything of a little man accompanied by a handsome young woman?”

The old negro did not say a single word to him, but dived into the water. When he came out he called the giant’s attention to the bed of onions. “I planted these onions,” he said. “Aren’t they a good crop?”

The bed of onions smelled so strong that the giant did not like to stay near them. The butterfly flew at the giant’s eyes and almost into them. He was disgusted and went home to talk it over with his wife.

“How silly you were,” said the giant’s wife. “Don’t you see that Guimara had changed herself into a river and had changed D. Joaõ into an old negro, the horse into a tree, the saddle into a bed of onions, and the musket into a butterfly? Hurry after them at once.”

The giant again went in pursuit, promising his wife that next time he would not let Guimara play any tricks on him. The next time that Guimara saw her father coming she thought of a new plan. She changed herself into a church. She turned D. Joaõ into a padre, the horse into a bell, the saddle into an altar and the musket into a mass-book.

When the giant approached the church he was completely deceived. “O, holy padre,” he said to the priest, “have you seen anything of a little man, accompanied by a handsome young woman, passing this way?”

The padre went on with his mass and said:

“I am a hermit padre

Devoted to the Immaculate;

I do not hear what you say.

The giant could get no other response from him. At last he gave up in despair and went home to talk things over with his wife.

“Of all stupid fools you are the most stupid of all,” said his wife when she had heard the tale. “Don’t you see that Guimara has changed herself into a church, D. Joaõ into a priest, the horse into a bell, the saddle into the altar, and the musket into the mass-book? Hurry after them again as fast as you can. I am going with you, myself, this time, to see that Guimara does not play any more tricks on you.”

This time the fugitives had travelled far when Guimara’s parents overtook them. They had almost reached D. Joaõ’s own kingdom. Guimara threw a handful of dust into her parents’ eyes, and it became so dark that they could not see. Guimara and D. Joaõ escaped safely into his own kingdom.

When they had started out on the journey, Guimara had said, “O, D. Joaõ, whatever happens, don’t forget me for one single minute. Think of me all the time.” He had promised and he had remembered her every instant on the journey. However, when they reached his own kingdom, he was so happy to see home once more after all his adventures that he thought he had never before been so happy in all his life. After one has been living in Giantland it is very pleasant to get home where things are a few sizes smaller and a bit more convenient. Then, too, it was very pleasant for him to see all his friends again. He was so happy at being home that, just for one little minute, he forgot all about Guimara.

When D. Joaõ remembered Guimara he turned around to look at her. When he saw her he could hardly believe his eyes. Instead of being a tall, tall giantess with her head up in the clouds, she reached just to D. Joaõ’s own shoulder. D. Joaõ was so surprised that he had to sit down in a chair and be fanned. He couldn’t say a single word for eighteen minutes and a half—his breath had been so completely taken away.

“It is a good thing that you happened to think of me just as soon as you did,” remarked Guimara. “I was getting smaller and smaller. If you had neglected to think of me for another minute I should have faded away entirely and you would have never known what had become of me.”

When Guimara became small she lost her power as an enchantress entirely. Her lovely eyes were always a trifle sad because D. Joaõ had forgotten her that one little minute. She never went back to Giantland but reigned as queen of D. Joaõ’s kingdom for many years.

The Forest Lad and the Wicked Giant

Prev Story The Adventures of a Fisherman's Son
Next Story

The Forest Lad and the Wicked Giant