Once upon a time many, many years ago, there lived in China two friends named Ki-wu and Pao-shu. These two young men, like Damon and Pythias, loved each other and were always together. No cross words passed between them; no unkind thoughts marred their friendship. Many an interesting tale might be told of their unselfishness, and of how the good fairies gave them the true reward of virtue. One story alone, however, will be enough to show how strong was their affection and their goodness.

{Note: You can read an illustrated version of this story, plus other Chinese tales, in our collection Chinese Tales: An Enchanting Collection of 24 Chinese Folk Tales and Fairy Tales , now available for Amazon Kindle and paperback. Listen to this and many other Chinese fairy tale and folktale audiobooks in the Fairytalez Audio App for Apple and Android devices}

It was a bright beautiful day in early spring when Ki-wu and Pao-shu set out for a stroll together, for they were tired of the city and its noises.

“Let us go into the heart of the pine forest,” said Ki-wu lightly. “There we can forget the cares that worry us; there we can breathe the sweetness of the flowers and lie on the moss-covered ground.”

Happy as two lovers on a holiday, they passed along the winding road, their eyes turned in longing toward the distant tree-tops. Their hearts beat fast in youthful pleasure as they drew nearer and nearer to the woods.

“And I,” added Pao-shu sadly, “have worked like a slave at my counter and found it just as dull as you have found your books. My master treats me badly. It seems good, indeed, to get beyond his reach.” 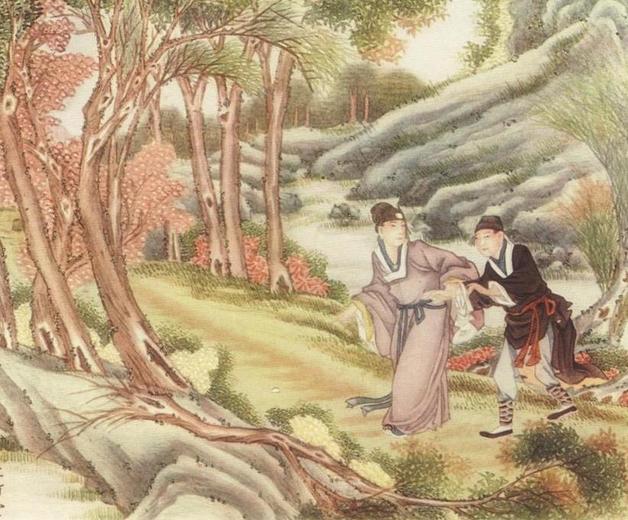 “They saw shining in the pathway, directly in front of them, a lump of gold.” Illustration by Li Chu-T’ang, published in A Chinese Wonder Book by Norman Hinsdale Pittman (1919), E.P. Dutton and Company.

Now they came to the border of the grove, crossed a little stream, and plunged headlong among the trees and shrubs. For many an hour they rambled on, talking and laughing merrily; when suddenly on passing round a clump of flower-covered bushes, they saw shining in the pathway directly in front of them a lump of gold.

“See!” said both, speaking at the same time, and pointing toward the treasure.

] Ki-wu, stooping, picked up the nugget. It was nearly as large as a lemon, and was very pretty. “It is yours, my dear friend,” said he, at the same time handing it to Pao-shu; “yours because you saw it first.”

“No, no,” answered Pao-shu, “you are wrong, my brother, for you were first to speak. Now, you can never say hereafter that the good fairies have not rewarded you for all your faithful hours of study.”

“Repaid me for my study! Why, that is impossible. Are not the wise men always saying that study brings its own reward? No, the gold is yours: I insist upon it. Think of your weeks of hard labour—of the masters that have ground you to the bone! Here is something far better. Take it,” laughing. “May it be the nest egg by means of which you may hatch out a great fortune.”

Thus they joked for some minutes, each refusing to take the treasure for himself; each insisting that it belonged to the other. At last, the chunk of gold was dropped in the very spot where they had first spied it, and the two comrades went away, each happy because he loved his friend better than anything else in the world. Thus they turned their backs on any chance of quarrelling.

“It was not for gold that we left the city,” exclaimed Ki-wu warmly.

“No,” replied his friend, “One day in this forest is worth a thousand nuggets.”

“Let us go to the spring and sit down on the rocks,” suggested Ki-wu. “It is the coolest spot in the whole grove.”

When they reached the spring they were sorry to find the place already occupied. A countryman was stretched at full length on the ground.

“Wake up, fellow!” cried Pao-shu, “there is money for you near by. Up yonder path a golden apple is waiting for some man to go and pick it up.”

Then they described to the unwelcome stranger the exact spot where the treasure was, and were delighted to see him set out in eager search.

For an hour they enjoyed each other’s company, talking of all the hopes and ambitions of their future, and listening to the music of the birds that hopped about on the branches overhead.

At last they were startled by the angry voice of the man who had gone after the nugget. “What trick is this you have played on me, masters? Why do you make a poor man like me run his legs off for nothing on a hot day?”

“What do you mean, fellow?” asked Ki-wu, astonished. “Did you not find the fruit we told you about?”

“No,” he answered, in a tone of half-hidden rage, “but in its place a monster snake, which I cut in two with my blade. Now, the gods will bring me bad luck for killing something in the woods. If you thought you could drive me from this place by such a trick, you’ll soon find you were mistaken, for I was first upon this spot and you have no right to give me orders.”

“Stop your chatter, bumpkin, and take this copper for your trouble. We thought we were doing you a favour. If you are blind, there’s no one but yourself to blame. Come, Pao-shu, let us go back and have a look at this wonderful snake that has been hiding in a chunk of gold.”

Laughing merrily, the two companions left the countryman and turned back in search of the nugget.

“If I am not mistaken,” said the student, “the gold lies beyond that fallen tree.”

“Quite true; we shall soon see the dead snake.”

Quickly they crossed the remaining stretch of pathway, with their eyes fixed intently on the ground. Arriving at the spot where they had left the shining treasure, what was their surprise to see, not the lump of gold, not the dead snake described by the idler, but, instead, two beautiful golden nuggets, each larger than the one they had seen at first.

Each friend picked up one of these treasures and handed it joyfully to his companion.

“At last the fairies have rewarded you for your unselfishness!” said Ki-wu.

“Yes,” answered Pao-shu, “by granting me a chance to give you your deserts.”

Prev Story The Man Who Would Not Scold
Next Story