Fairytalez.com » Asbjørnsen & Moe » The Lad who Went to the North Wind

Once on a time there was an old widow who had one son; and as she was poorly and weak, her son had to go up into the safe to fetch meal for cooking; but when he got outside the safe, and was just going down the steps, there came the North Wind puffing and blowing, caught up the meal, and so away with it through the air. Then the Lad went back into the safe for more; but when he came out again on the steps, if the North Wind didn’t come again and carry off the meal with a puff: and, more than that, he did so the third time. At this the Lad got very angry; and as he thought it hard that the North Wind should behave so, he thought he’d just look him up, and ask him to give up his meal.

So off he went, but the way was long, and he walked and walked; but at last he came to the North Wind’s house.

“Good day!” said the Lad, “and thank you for coming to see us yesterday.”

“Good Day!” answered the North Wind, for his voice was loud and gruff, “and thanks for coming to see me. What do you Want?”

“Oh!” answered the Lad, “I only wished to ask you to be so good as to let me have back that meal you took from me on the safe steps, for we haven’t much to live on; and if you’re to go on snapping up the morsel we have, there’ll be nothing for it but to starve.”

“I haven’t got your meal,” said the North Wind; “but if you are in such need, I’ll give you a cloth which will get you everything you want, if you only say, ‘Cloth, spread yourself, and serve up all kinds of good dishes!’”

With this the Lad was well content. But, as the way was so long he couldn’t get home in one day, so he turned into an inn on the way; and when they were going to sit down to supper he laid the cloth on a table which stood in the corner, and said:

“Cloth, spread yourself, and serve up all kinds of good dishes.” 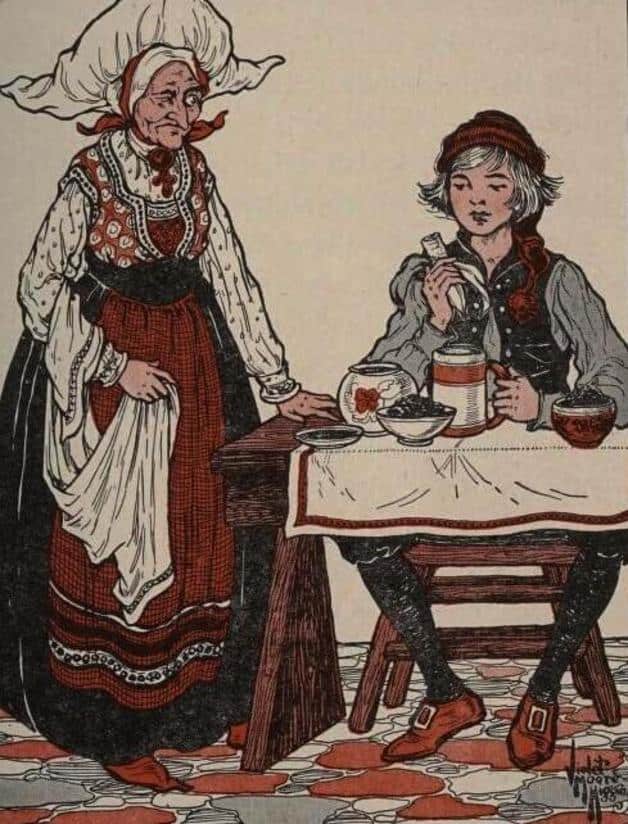 “How easy it would be for her with such a cloth.” Illustration by Violet Moore Higgins, published in East o’ the Sun and West o’ the Moon by Asbjornsen and Moe (1924), A. Whitman and Company.

He had scarce said so before the cloth did as it was bid; and all who stood by thought it a fine thing, but most of all the landlady. So, when all were fast asleep at dead of night, she took the Lad’s cloth, and put another in its stead, just like the one he had got from the North Wind, but which couldn’t so much as serve up a bit of dry bread.

So, when the Lad woke, he took his cloth and went off with it, and that day he got home to his mother.

“Now,” said he, “I’ve been to the North Wind’s house, and a good fellow he is, for he gave me this cloth, and when I only say to it, ‘Cloth, spread yourself, and serve up all kinds of good dishes,’ I get any sort of food I please.”

“All very true, I daresay,” said his mother; “but seeing is believing, and I shan’t believe it till I see it.”

So the Lad made haste, drew out a table, laid the cloth on it, and said:

“Cloth, spread yourself, and serve up all kinds of good dishes.”

But never a bit of dry bread did the cloth serve up.

“Well,” said the Lad “there’s no help for it but to go to the North Wind again;” and away he went.

So he came to where the North Wind lived late in the afternoon.

“I want my rights for that meal of ours which you took,” said the Lad; “for, as for that cloth I got, it isn’t worth a penny.”

“I’ve got no meal,” said the North Wind; “but yonder you have a ram which coins nothing but golden ducats as soon as you say to it: ‘Ram, ram! make money!’”

So the Lad thought this a fine thing; but as it was too far to get home that day, he turned in for the night to the same inn where he had slept before.

Before he called for anything, he tried the truth of what the North Wind had said of the ram, and found it all right; but, when the landlord saw that, he thought it was a famous ram, and, when the Lad had fallen asleep, he took another which couldn’t coin gold ducats, and changed the two.

Next morning off went the Lad; and when he got home to his mother, he said:

“After all, the North Wind is a jolly fellow; for now he has given me a ram which can coin golden ducats if I only say: ‘Ram, ram! make money!’”

“All very true, I daresay,” said his mother; “but I shan’t believe any such stuff until I see the ducats made.”

“Ram, ram! make money!” said the Lad; but if the ram made anything, it wasn’t money.

So the Lad went back again to the North Wind, and blew him up, and said the ram was worth nothing, and he must have his rights for the meal.

So, as the way was long, the Lad turned in this night too to the landlord; but as he could pretty well guess how things stood as to the cloth and the ram, he lay down at once on the bench and began to snore, as if he were asleep.

Now the landlord, who easily saw that the stick must be worth something, hunted up one which was like it, and when he heard the lad snore, was going to change the two; but, just as the landlord was about to take it, the Lad bawled out:

So the stick began to beat the landlord, till he jumped over chairs, and tables, and benches, and yelled and roared:

“Oh my! oh my! bid the stick be still, else it will beat me to death, and you shall have back both your cloth and your ram.”

When the Lad thought the landlord had got enough, he said:

Then he took the cloth and put it into his pocket, and went home with his stick in his hand, leading the ram by a cord round its horns; and so he got his rights for the meal he had lost.

The Husband who was to Mind the House

Prev Story The Three Princesses of Whiteland
Next Story

The Husband who was to Mind the House