When birds were men, and men were birds, Pivi and Kabo lived in an island far away, called New Claledonia. Pivi was a cheery little bird that chirps at sunset; Kabo was an ugly black fowl that croaks in the darkness. One day Pivi and Kabo thought that they would make slings, and practice slinging, as the people of the island still do. So they went to a banyan tree, and stripped the bark to make strings for their slings, and next they repaired to the river bank to find stones. Kabo stood on the bank of the river, and Pivi went into the water. The game was for Kabo to sling at Pivi, and for Pivi to dodge the stones, if he could. For some time he dodged them cleverly, but at last a stone from Kabo’s sling hit poor Pivi on the leg and broke it. Down went Pivi into the stream, and floated along it, till he floated into a big hollow bamboo, which a woman used for washing her sweet potatoes.

‘What is that in my bamboo?’ said the woman. And she blew in at one end, and blew little Pivi out at the other, like a pea from a pea-shooter.

‘Oh!’ cried the woman, ‘what a state you are in! What have you been doing?’

‘It was Kabo who broke my leg at the slinging game,’ said Pivi.

‘I will!’ said Pivi, for the woman was very kind and pretty. She took Pivi into a shed where she kept her fruit laid him on a bed of mats, and made him as comfortable as she could, and attended to his broken leg without cutting off the flesh round the bone, as these people usually do.

‘You will be still, won’t you, Pivi?’ she said. ‘If you hear a little noise you will pretend to be dead. It is the Black Ant who will come and creep from your feet up to your head. Say nothing, and keep quiet, won’t you, Pivi?’

‘Certainly, kind lady,’ said Pivi, ‘I will lie as still as can be.’

‘Next will come the big Red Ant–you know him?’

‘Yes, I know him, with his feet like a grasshopper’s.’

‘He will walk over your body up to your head. Then you must shake all your body. Do you understand, Pivi?’

‘Very good,’ said the woman, going out and shutting the door.

Pivi lay still under his coverings, then a tiny noise was heard, and the Black Ant began to march over Pivi, who lay quite still. Then came the big Red Ant skipping along his body, and then Pivi shook himself all over. He jumped up quite well again, he ran to the river, he looked into the water and saw that he was changed from a bird into a fine young man!

‘Will you obey me again?’ said the woman.

‘Always; whatever you command I will do it,’ said Pivi, politely.

‘Then climb up that cocoa-nut tree, with your legs only, not using your hands,’ said the woman.

Now the natives can run up cocoa-nut trees like squirrels, some using only one hand; the girls can do that. But few can climb without using their hands at all.

‘At the top of the tree you will find two cocoa-nuts. You must not throw them down, but carry them in your hands; and you must descend as you went up, using your legs only.’

‘I shall try, at least,’ said Pivi. And up he went, but it was very difficult, and down he came.

‘Here are your cocoa-nuts,’ he said, presenting them to the woman.

‘Now, Pivi, put them in the shed where you lay, and when the sun sets to cool himself in the sea and rise again not so hot in the dawn you must go and take the nuts.’

All day Pivi played about in the river, as the natives do, throwing fruit and silvery showers of water at each other. When the sun set he went into the hut. But as he drew near he heard sweet voices talking and laughing within.

‘What is that? People chattering in the hut! Perhaps they have taken my cocoa-nuts,’ said Pivi to himself.

In he went, and there he found two pretty, laughing, teasing girls. He hunted for his cocoanuts, but none were there.

Down he ran to the river. ‘Oh, lady, my nuts have been stolen! ‘ he cried.

‘Come with me, Pivi, and there will be nuts for you,’ said the woman.

They went back to the hut, where the girls were laughing and playing.

‘Nuts for you?’ said the woman, ‘there are two wives for you, Pivi, take them to your house.’

So they were married and very happy, when in came cross old Kabo.

‘Oh, yes!’ said Pivi. ‘But I am much better looking, and there are my two wives, are they not beautiful?’

‘You are mocking me, Pivi! Your wives? How? Where did you get them? You, with wives! ‘

Then Pivi told Kabo about the kind woman, and all the wonderful things that had happened to him.

‘Well, well!’ said Kabo, ‘but I want to be handsome too, and to have pretty young wives.’

‘But how can we manage that?’ asked Pivi.

‘Oh, we shall do all the same things over again–play at slinging, and, this time, you shall break my leg, Pivi!’

‘With all the pleasure in life,’ said Pivi, who was always ready to oblige.

So they went slinging, and Pivi broke Kabo’s leg, and Kabo fell into the river, and floated into the bamboo, and the woman blew him out, just as before. Then she picked up Kabo, and put him in the shed, and told him what to do when the Black Ant came, and what to do when the Red Ant came. But he didn’t!

When the Black Ant came, he shook himself, and behold, he had a twisted leg, and a hump back, and was as black as the ant.

Then he ran to the woman.

‘Look, what a figure I am!’ he said; but she only told him to climb the tree, as she had told Pivi.

But Kabo climbed with both hands and feet, and he threw down the nuts, instead of carrying them down, and he put them in the hut. And when he went back for them there he found two horrid old black hags, wrangling, and scolding, and scratching! So back he went to Pivi with his two beautiful wives, and Pivi was very sorry, but what could he do? Nothing, but sit and cry.

So, one day, Kabo came and asked Pivi to sail in his canoe to a place where he knew of a great big shell-fish, enough to feed on for a week. Pivi went, and deep in the clear water they saw a monstrous shell-fish, like an oyster, as big as a rock, with the shell wide open. 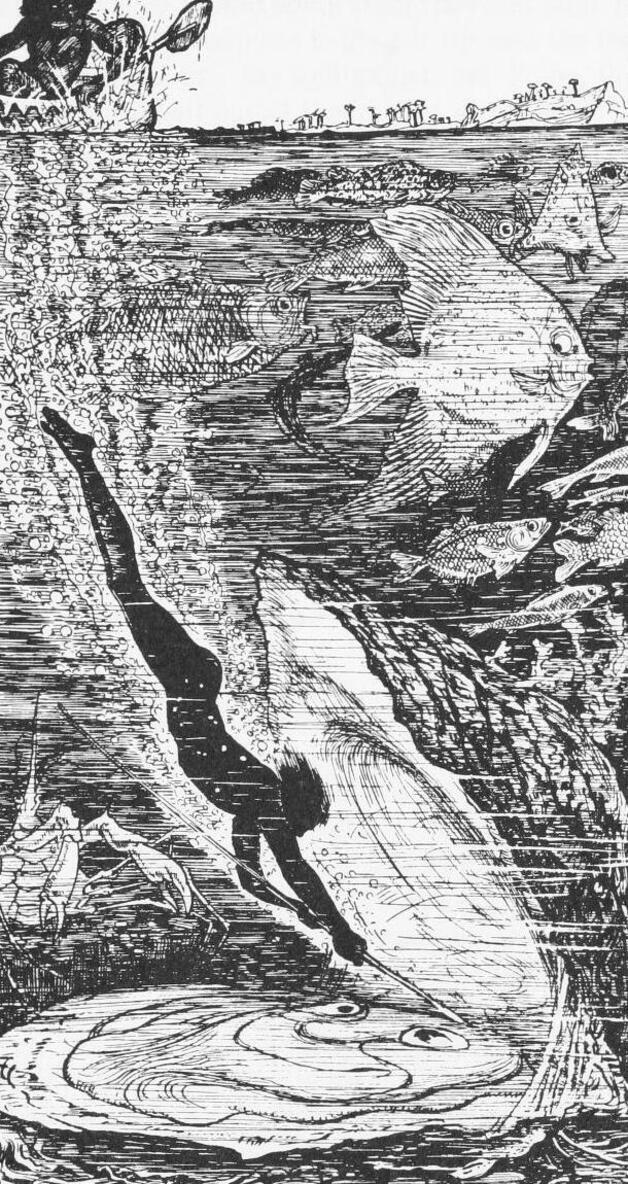 “Pivi dives for one shellfish.” Illustration by H.J. Ford, published in The Brown Fairy Book by Andrew Lang (1904), Longmans, Green, and Company.

‘We shall catch it, and dry it, and kipper it,’ said Pivi, ‘and give a dinner to all our friends!’

‘I shall dive for it, and break it off the rock,’ said Kabo, ‘and then you must help me to drag it up into the canoe.’

There the shell-fish lay and gaped, but Kabo, though he dived in, kept well out of the way of the beast.

Up he came, puffing and blowing: ‘ Oh, Pivi,’ he cried, ‘I cannot move it. Jump in and try yourself!’

Pivi dived, with his spear, and the shell-fish opened its shell wider yet, and sucked, and Pivi disappeared into its mouth, and the shell shut up with a snap!

Kabo laughed like a fiend, and then went home.

‘Where is Pivi?’ asked the two pretty girls. Kabo pretended to cry, and told how Pivi had been swallowed.

‘But dry your tears, my darlings,’ said Kabo, ‘I will be your husband, and my wives shall be your slaves. Everything is for the best, in the best of all possible worlds.’

‘No, no!’ cried the girls, ‘we love Pivi. We do not love anyone else. We shall stay at home, and weep for Pivi!’

‘Wretched idiots!’ cried Kabo; ‘Pivi was a scoundrel who broke my leg, and knocked me into the river.’

Then a little cough was heard at the door, and Kabo trembled, for he knew it was the cough of Pivi!

‘Ah, dear Pivi!’ cried Kabo, rushing to the door. ‘What joy! I was trying to console your dear wives.’

Pivi said not one word. He waved his hand, and five and twenty of his friends came trooping down the hill. They cut up Kabo into little pieces. Pivi turned round, and there was the good woman of the river.

‘Pivi,’ she said, ‘how did you get out of the living tomb into which Kabo sent you?’

‘I had my spear with me,’ said Pivi. ‘It was quite dry inside the shell, and I worked away at the fish with my spear, till he saw reason to open his shell, and out I came.’ Then the good woman laughed; and Pivi and his two wives lived happy ever afterwards.