Hawaii offers a rich collection of folklore of gods like Pele, Maui, and other deities. Stories from Hawaii are unique, a glimmering gem among the other folklore of North America. Researchers believe the earliest inhabitants of Hawaii existed around 300 CE, and throughout the years, various chiefs battled for control of the Hawaiian islands until the Kingdom of Hawaii was formed in 1795. Kamehameha the Great conquered O’ahu, Maui, Moloka’i, Lana’i, and Hawaii to unit them as one government. The government was overthrown in 1893, was annexed in 1897, then became a state in 1959. 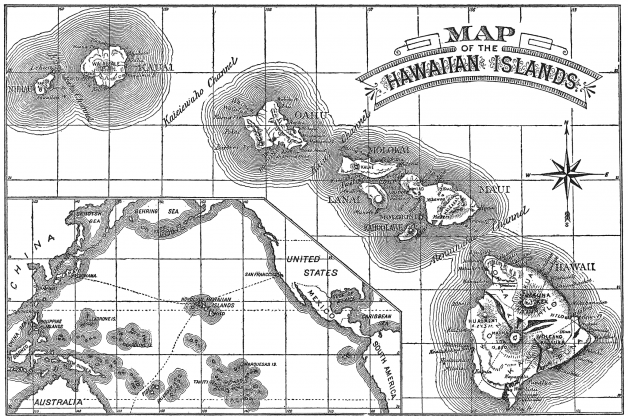 Map of Hawaiian islands, illustrated by unknown artist, published in The Legends of and Myths of Hawaii by His Hawaiian Majesty David Kalakaua (1888), Charles L. Webster Co.

In 1922, noted author Padraic Colum was commissioned by the Hawaiian legislature to collect Hawaiian stories, myths, and legends. In 1924, the first volume, At the Gateways of the Day, was published.

Discover Hawaiian folklore audiobooks plus hundreds of other folktale audiobooks on the Fairytalez Audio Book App for Apple and Android devices.