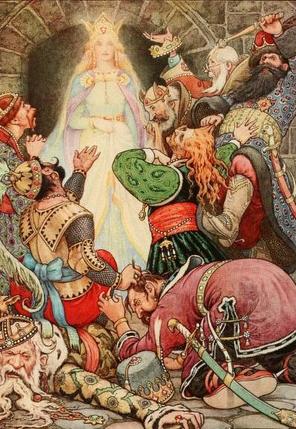 “It was clear that her fascination still worked upon the hearts of the prisoners.” Illustration by Frank Papes, published in The Russian Story Book by Richard Wilson (1916), MacMillan

About: Russian fairy tales are deeply rooted history in Slavic Mythology. They are vibrant, riveting and poetic tales of gods and demons, heroes and witches. Pagan slavic religion had deities for everything, such as water and household spirits; these stories for children taught people about manners, traditions, and warned against natural dangers.

Russian fairy tales nearly saw their extinction in the wake of Soviet rule because communist proponents found folklore detrimental to furthering their ideals. However, a man, Maxim Gorky, stressed the importance and artistic value of the country’s folklore, and convinced Soviet leaders that fairy tales were, in fact, in line with communistic beliefs, and would help foster patriotism and support a burgeoning soviet society. Because of Gorky’s efforts, the 1920s are considered the Golden Age of Russian Folklore, as research and preservation efforts were expanded to increase the country’s collection of fairy tales and folk tales. Many new writers took the stage and wrote contemporary folklore that extolled political leaders, like Stalin and Lenin, and imparted communist ideals and morals. In this way, Russia’s folklore was not only a means to maintain tradition and impart values and morals to a community, but also a means of distributing soviet propaganda to the masses.

Russian fairy tale heroes and Slavic gods continue to be depicted in the modern arts of Russia, and many holidays are held annually to celebrate their favorite heroes. Though Russia adopted Christianity in the 10th century, and tried to replace Slavic gods with Christian icons, the heroes of lore persisted and could never be entirely eradicated. Russia has such a wide and rich collection of folklore due largely to folklorist Alexander Afanasyev, who published more than 600 Russian folk tales and fairy tales, and thanks to British scholar, Robert Steele, who gathered and anthologized numerous folk tales from the region into the fairy tale collection known as The Russian Garland. Poet Alexander Pushkin is a beloved Russian author who published verse based on fairy tales and folk tales from Russia.

Listen to Russian fairy tales and folktales plus hundreds of other fairy tale audiobooks in the Fairytalez Audio Book App for Apple and Android devices.