Once upon a time there was a man who took a child to a woman in a certain village, and told her to take care of him. Then he disappeared. And because the dawn was just breaking in the sky when the woman took the child into her home, she called him Sky O’Dawn. When the child was three years old, he would often look up to the heavens and talk with the stars. One day he ran away and many months passed before he came home again. The woman gave him a whipping. But he ran away again, and did not return for a year. His foster-mother was frightened, and asked: “Where have you been all year long?” The boy answered: “I only made a quick trip to the Purple Sea. There the water stained my clothes red. So I went to the spring at which the sun turns in, and washed them. I went away in the morning and I came back at noon. Why do you speak about my having been gone a year?”

Then the woman asked: “And where did you pass on your way?”

The boy answered: “When I had washed my clothes, I rested for a while in the City of the Dead and fell asleep. And the King-Father of the East gave me red chestnuts and rosy dawn-juice to eat, and my hunger was stilled. Then I went to the dark skies and drank the yellow dew, and my thirst was quenched. And I met a black tiger and wanted to ride home on his back. But I whipped him too hard, and he bit me in the leg. And so I came back to tell you about it.”

Once more the boy ran away from home, thousands of miles, until he came to the swamp where dwelt the Primal Mist. There he met an old man with yellow eyebrows and asked him how old he might be. The old man said: “I have given up the habit of eating, and live on air. The pupils of my eyes have gradually acquired a green glow, which enables me to see all hidden things. Whenever a thousand years have passed I turn around my bones and wash the marrow. And every two thousand years I scrape my skin to get rid of the hair. I have already washed my bones thrice and scraped my skin five times.”

Afterward Sky O’Dawn served the Emperor Wu of the Han dynasty. The Emperor, who was fond of the magic arts, was much attached to him. One day he said to him: “I wish that the empress might not grow old. Can you prevent it?”

Sky O’Dawn answered: “I know of only one means to keep from growing old.”

The Emperor asked what herbs one had to eat. Sky O’Dawn replied: “In the North-East grow the mushrooms of life. There is a three-legged crow in the sun who always wants to get down and eat them. But the Sun-God holds his eyes shut and does not let him get away. If human beings eat them they become immortal, when animals eat them they grow stupefied.”

“And how do you know this?” asked the Emperor.

“When I was a boy I once fell into a deep well, from which I could not get out for many decades. And down there was an immortal who led me to this herb. But one has to pass through a red river whose water is so light that not even a feather can swim on it. Everything that touches its surface sinks to the depths. But the man pulled off one of his shoes and gave it to me. And I crossed the water on the shoe, picked the herb and ate it. Those who dwell in that place weave mats of pearls and precious stones. They led me to a spot before which hung a curtain of delicate, colored skin. And they gave me a pillow carved of black jade, on which were graven sun and moon, clouds and thunder. They covered me with a dainty coverlet spun of the hair of a hundred gnats. A cover of that kind is very cool and refreshing in summer. I felt of it with my hands, and it seemed to be formed of water; but when I looked at it more closely, it was pure light.” 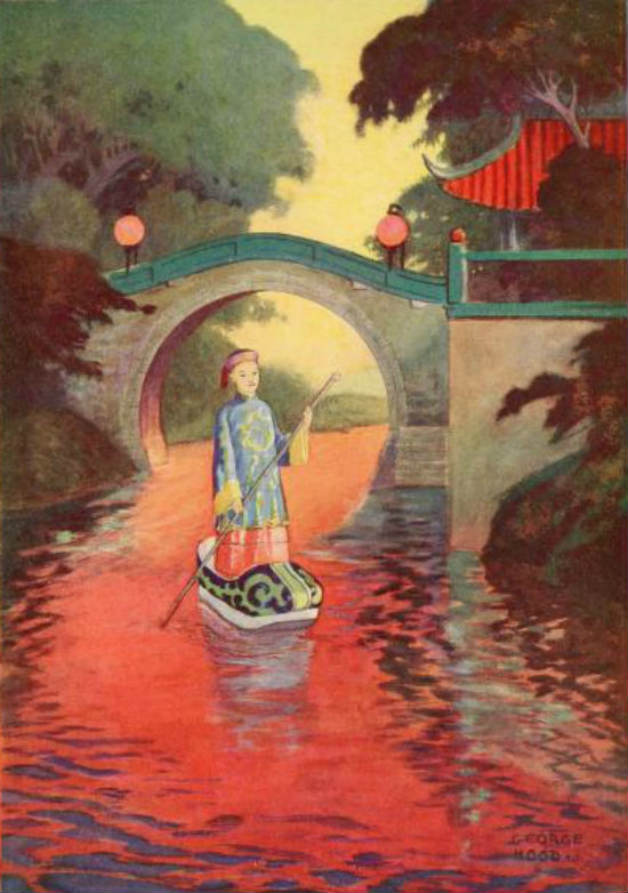 “And I crossed the water in the shoe.” Illustration by George Hood. Published in The Chinese Fairy Book by Richard Wilhelm (1921), Frederick A. Stokes Company.

Once the Emperor called together all his magicians in order to talk with them about the fields of the blessed spirits. Sky O’Dawn was there, too, and said: “Once I was wandering about the North Pole and I came to the Fire-Mirror Mountain. There neither sun nor moon shines. But there is a dragon who holds a fiery mirror in his jaws in order to light up the darkness. On the mountain is a park, and in the park is a lake. By the lake grows the glimmer-stalk grass, which shines like a lamp of gold. If you pluck it and use it for a candle, you can see all things visible, and the shapes of the spirits as well. It even illuminates the interior of a human being.”

Once Sky O’Dawn went to the East, into the country of the fortunate clouds. And he brought back with him from that land a steed of the gods, nine feet high. The Emperor asked him how he had come to find it.

So he told him: “The Queen-Mother of the West had him harnessed to her wagon when she went to visit the King-Father of the East. The steed was staked out in the field of the mushrooms of life. But he trampled down several hundred of them. This made the King-Father angry, and he drove the steed away to the heavenly river. There I found him and rode him home. I rode three times around the sun, because I had fallen asleep on the steed’s back. And then, before I knew it, I was here. This steed can catch up with the sun’s shadow. When I found him he was quite thin and as sad as an aged donkey. So I mowed the grass of the country of the fortunate clouds, which grows once every two-thousand years on the Mountain of the Nine Springs and fed it to the horse; and that made him lively again.”

The Emperor asked what sort of a place the country of the fortunate clouds might be. Sky O’Dawn answered: “There is a great swamp there. The people prophesy fortune and misfortune by the air and the clouds. If good fortune is to befall a house, clouds of five colors form in the rooms, which alight on the grass and trees and turn into a colored dew. This dew tastes as sweet as cider.”

The Emperor asked whether he could obtain any of this dew. Sky O’Dawn replied: “My steed could take me to the place where it falls four times in the course of a single day!”

And sure enough he came back by evening, and brought along dew of every color in a crystal flask. The Emperor drank it and his hair grew black again. He gave it to his highest officials to drink, and the old grew young again and the sick became well.

Once, when a comet appeared in the heavens, Sky O’Dawn gave the Emperor the astrologer’s wand. The Emperor pointed it at the comet and the comet was quenched.

Sky O’Dawn was an excellent whistler. And whenever he whistled in full tones, long drawn out, the motes in the sunbeams danced to his music.

Once he said to a friend: “There is not a soul on earth who knows who I am with the exception of the astrologer!”

When Sky O’Dawn had died, the Emperor called the astrologer to him and asked: “Did you know Sky O’Dawn?”

The Emperor said: “What do you know?”

The astrologer answered: “I know how to gaze on the stars.”

“Are all the stars in their places?” asked the Emperor.

“Yes, but for eighteen years I have not seen the Star of the Great Year. Now it is visible once more.”

Then the Emperor looked up towards the skies and sighed: “For eighteen years Sky O’Dawn kept me company, and I did not know that he was the Star of the Great Year!”

Note: The mother of Sky O’Dawn, (Dung Fang So) who makes so mysterious an appearance on earth, according to one tradition, is the third daughter of the Lord of the Heavens. (Comp. Note to No. 16). Dung Fang So is an incarnation of the Wood Star or Star of the Great Year (Jupiter). The King-Father of the East, one of the Five Ancients, is the representative of wood (comp. No. 15). Red chestnuts, like fire-dates, are fruits of the gods, and bestow immortality. Sky O’Dawn was an excellent whistler.

Whistling is a famous means of magic among the Taoists. The Emperor Wu of the Han dynasty, was a prince who is reputed to have devoted much attention to the magic arts. He reigned from 140 to 86 B.C. The three-legged crow in the sun is the counterpart of the three-legged ram-toad in the moon. The Red River recalls the Weak River by the Castle of the Queen-Mother of the West.