Fairytalez.com » A 1001 Nights » The Story of the Greek King and the Physician Douban

In the country of Zouman, in Persia, there lived a Greek king. This king was a leper, and all his doctors had been unable to cure him, when a very clever physician came to his court.

He was very learned in all languages, and knew a great deal about herbs and medicines. 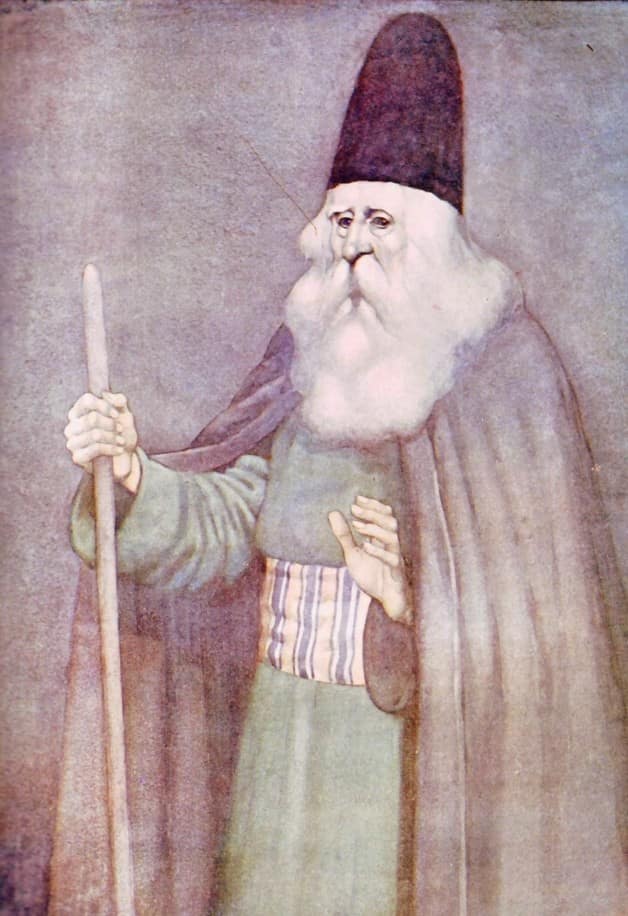 “There arived a great sage versed in the wisdom of the philosophers.” Illustration by Monro S. Orr, published in Olcott’s Arabian Nights by Frances Jenkins Olcott (1913), Henry, Holt and Company.

As soon as he was told of the king’s illness he put on his best robe and presented himself before the king. “Sire,” said he, “I know that no physician has been able to cure your majesty, but if you will follow my instructions, I will promise to cure you without any medicines or outward application.”

The king listened to this proposal.

“If you are clever enough to do this,” he said, “I promise to make you and your descendants rich for ever.”

The physician went to his house and made a polo club, the handle of which he hollowed out, and put in it the drug he wished to use. Then he made a ball, and with these things he went the next day to the king.

He told him that he wished him to play at polo. Accordingly the king mounted his horse and went into the place where he played. There the physician approached him with the bat he had made, saying, “Take this, sire, and strike the ball till you feel your hand and whole body in a glow. When the remedy that is in the handle of the club is warmed by your hand it will penetrate throughout your body. The you must return to your palace, bathe, and go to sleep, and when you awake to-morrow morning you will be cured.”

The king took the club and urged his horse after the ball which he had thrown. He struck it, and then it was hit back by the courtiers who were playing with him. When he felt very hot he stopped playing, and went back to the palace, went into the bath, and did all that the physician had said. The next day when he arose he found, to his great joy and astonishment, that he was completely cured. When he entered his audience-chamber all his courtiers, who were eager to see if the wonderful cure had been effected, were overwhelmed with joy.

The physician Douban entered the hall and bowed low to the ground. The king, seeing him, called him, made him sit by his side, and showed him every mark of honor.

That evening he gave him a long and rich robe of state, and presented him with two thousand sequins. The following day he continued to load him with favors.

Now the king had a grand-vizir who was avaricious, and envious, and a very bad man. He grew extremely jealous of the physician, and determined to bring about his ruin.

In order to do this he asked to speak in private with the king, saying that he had a most important communication to make.

“Sire,” answered the grand-vizir, “it is most dangerous for a monarch to confide in a man whose faithfulness is not proved. You do not know that this physician is not a traitor come here to assassinate you.”

“I am sure,” said the king, “that this man is the most faithful and virtuous of men. If he wished to take my life, why did he cure me? Cease to speak against him. I see what it is, you are jealous of him; but do not think that I can be turned against him. I remember well what a vizir said to King Sindbad, his master, to prevent him from putting the prince, his son, to death.”

What the Greek king said excited the vizir’s curiosity, and he said to him, “Sire, I beg your majesty to have the condescension to tell me what the vizir said to King Sindbad.”

“This vizir,” he replied, “told King Sindbad that one ought not believe everything that a mother-in-law says, and told him this story.”

The Story of the Fisherman

The Story of the Fisherman