Many years ago the hippopotamus, whose name was Isantim, was one of the biggest kings on the land; he was second only to the elephant. The hippo had seven large fat wives, of whom he was very fond. Now and then he used to give a big feast to the people, but a curious thing was that, although every one knew the hippo, no one, except his seven wives, knew his name.

At one of the feasts, just as the people were about to sit down, the hippo said, “You have come to feed at my table, but none of you know my name. If you cannot tell my name, you shall all of you go away without your dinner.” 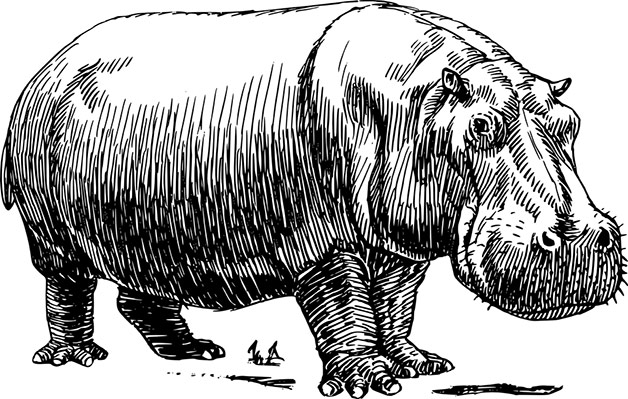 As they could not guess his name, they had to go away and leave all the good food and tombo behind them. But before they left, the tortoise stood up and asked the hippopotamus what he would do if he told him his name at the next feast? So the hippo replied that he would be so ashamed of himself, that he and his whole family would leave the land, and for the future would dwell in the water.

Now it was the custom for the hippo and his seven wives to go down every morning and evening to the river to wash and have a drink. Of this custom the tortoise was aware. The hippo used to walk first, and the seven wives followed. One day when they had gone down to the river to bathe, the tortoise made a small hole in the middle of the path, and then waited. When the hippo and his wives returned, two of the wives were some distance behind, so the tortoise came out from where he had been hiding, and half buried himself in the hole he had dug, leaving the greater part of his shell exposed. When the two hippo wives came along, the first one knocked her foot against the tortoise’s shell, and immediately called out to her husband, “Oh! Isantim, my husband, I have hurt my foot.” At this the tortoise was very glad, and went joyfully home, as he had found out the hippo’s name.

When the next feast was given by the hippo, he made the same condition about his name; so the tortoise got up and said, “You promise you will not kill me if I tell you your name?” and the hippo promised. The tortoise then shouted as loud as he was able, “Your name is Isantim,” at which a cheer went up from all the people, and then they sat down to their dinner.

When the feast was over, the hippo, with his seven wives, in accordance with his promise, went down to the river, and they have always lived in the water from that day till now; and although they come on shore to feed at night, you never find a hippo on the land in the daytime.

The Cock Who Caused a Fight Between Two Towns

Prev Story Why Dead People Are Buried
Next Story

The Cock Who Caused a Fight Between Two Towns