There was once a butterfly who wished for a bride; and, as may be supposed, he wanted to choose a very pretty one from among the flowers. He glanced with a very critical eye at all the flower beds and found that the flowers were seated quietly and demurely on their stalks, just as maidens should sit. But there was a great number of them, and it appeared as if making his choice would become very wearisome. The butterfly did not like to take too much trouble, so he flew off on a visit to the daisies.

The French call this flower Marguerite and say that it can prophesy. Lovers pluck off the leaves, and as they pluck each leaf they ask a question about their sweethearts, thus: “Does he or she love me? Dearly? Distractedly? Very much? A little? Not at all?” and so on. Each one speaks these words in his own language. 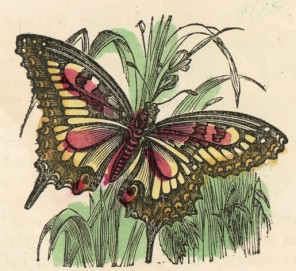 The butterfly came, also, to Marguerite to inquire, but he did not pluck off her leaves; he pressed a kiss on each of them, for he thought there was always more to be done by kindness.

“Darling Marguerite daisy,” he said to her, “you are the wisest woman of them all. Pray tell me which of the flowers I shall choose for my wife. Which will be my bride? When I know, I will fly directly to her and propose.”

But Marguerite did not answer him. She was offended that he should call her a woman when she was only a girl; there is a great difference. He asked her a second time, and then a third, but she remained dumb, answering him not at all. Then he would wait no longer, but flew away to commence his wooing at once. It was in the early spring, when the crocus and the snowdrop were in full bloom.

“They are very pretty,” thought the butterfly; “charming little lasses, but they are rather stiff and formal.”

Then, as young lads often do, he looked out for the older girls. He next flew to the anemones, but these were rather sour to his taste. The violet was a little too sentimental; the lime blossoms were too small—and, besides, there was such a large family of them. The apple blossoms, though they looked like roses, bloomed to-day, but might fall off to-morrow with the first wind that blew; and he thought a marriage with one of them might last too short a time. The pea blossom pleased him most of all. She was white and red, graceful and slender, and belonged to those domestic maidens who have a pretty appearance, yet can be useful in the kitchen. He was just about to make her an offer when, close by her, he saw a pod, with a withered flower hanging at the end.

“That is my sister,” replied the pea blossom.

“Oh, indeed! and you will be like her some day,” said he. And at once he flew away, for he felt quite shocked.

A honeysuckle hung forth from the hedge, in full bloom; but there were so many girls like her, with long faces and sallow complexions! No, he did not like her. But which one did he like?

Spring went by, and summer drew toward its close. Autumn came, but he had not decided. The flowers now appeared in their most gorgeous robes, but all in vain—they had not the fresh, fragrant air of youth. The heart asks for fragrance even when it is no longer young, and there is very little of that to be found in the dahlias or the dry chrysanthemums. Therefore the butterfly turned to the mint on the ground. This plant, you know, has no blossom, but is sweetness all over; it is full of fragrance from head to foot, with the scent of a flower in every leaf.

“I will take her,” said the butterfly; and he made her an offer. But the mint stood silent and stiff as she listened to him. At last she said:

“I can give you friendship if you like, nothing more. I am old, and you are old, but we may live for each other just the same. As to marrying, however, no! that would appear ridiculous at our age.”

And so it happened that the butterfly got no wife at all. He had been too long choosing, which is always a bad plan, and became what is called an old bachelor.

It was late in the autumn, with rainy and cloudy weather. The cold wind blew over the bowed backs of the willows, so that they creaked again. It was not the weather for flying about in summer clothes, but fortunately the butterfly was not out in it. By a happy chance he had got a shelter. It was in a room heated by a stove and as warm as summer. He could live here, he said, well enough.

“But it is not enough merely to exist,” said he. “I need freedom, sunshine, and a little flower for a companion.”

So he flew against the window-pane and was seen and admired by those in the room, who caught him and stuck him on a pin in a box of curiosities. They could not do more for him.

“Now I am perched on a stalk like the flowers,” said the butterfly. “It is not very pleasant, certainly. I imagine it is something like being married, for here I am stuck fast.” And with this thought he consoled himself a little.

“That seems very poor consolation,” said one of the plants in the room, that grew in a pot.

“Ah,” thought the butterfly, “one can’t very well trust these plants in pots; they have had too much to do with human beings.”

Prev Story The Goblin and the Huckster
Next Story