In among the hills of Echizen, within sight of the snowy mountain called Hakuzan, lived a farmer named Bimbo. He was very poor, but frugal and industrious. He was very fond of children though he had none himself. He longed to adopt a son to bear his name, and often talked the matter over with his old dame. But being so dreadfully poor both thought it best not to adopt, until they had bettered their condition and increased the area of their land. For all the property Bimbo owned was the earth in a little gully, which he himself was reclaiming. A tiny rivulet, flowing from a spring in the crevice of the rocks above, after trickling over the boulders, rolled down the gully to join a brook in the larger valley below. Bimbo had with great labor, after many years, made dams or terraces of stone, inside which he had thrown soil, partly got from the mountain sides, but mainly carried in baskets on the backs of himself and his wife, from the valley below. By such weary toil, continued year in and year out, small beds of soil were formed, in which rice could be planted and grown. The little rivulet supplied the needful water; for rice, the daily food of laborer and farmer, must be planted and cultivated in soft mud under water. So the little rivulet, which once leaped over the rock and cut its way singing to the valley, now spread itself quietly over each terrace, making more than a dozen descents before it reached the fields below.

Yet after all his toil for a score of years, working every day from the first croak of the raven, until the stars came out, Bimbo and his wife owned only three tan (¾ acre) of terrace land. Sometimes a summer would pass, and little or no rain fall. Then the rivulet dried up and crops failed. It seemed all in vain that their backs were bent and their foreheads seamed and wrinkled with care. Many a time did Bimbo have hard work of it even to pay his taxes, which sometimes amounted to half his crop. Many a time did he shake his head, muttering the discouraged farmer’s proverb “A new field gives a scant crop,” the words of which mean also, “Human life is but fifty years.”

One summer day after a long drought, when the young rice sprouts, just transplanted were turning yellow at the tips, the clouds began to gather and roll, and soon a smart shower fell, the lightning glittered, and the hills echoed with claps of thunder. But Bimbo, hoe in hand, was so glad to see the rain fall, and the pattering drops felt so cool and refreshing, that he worked on, strengthening the terrace to resist the little flood about to come. 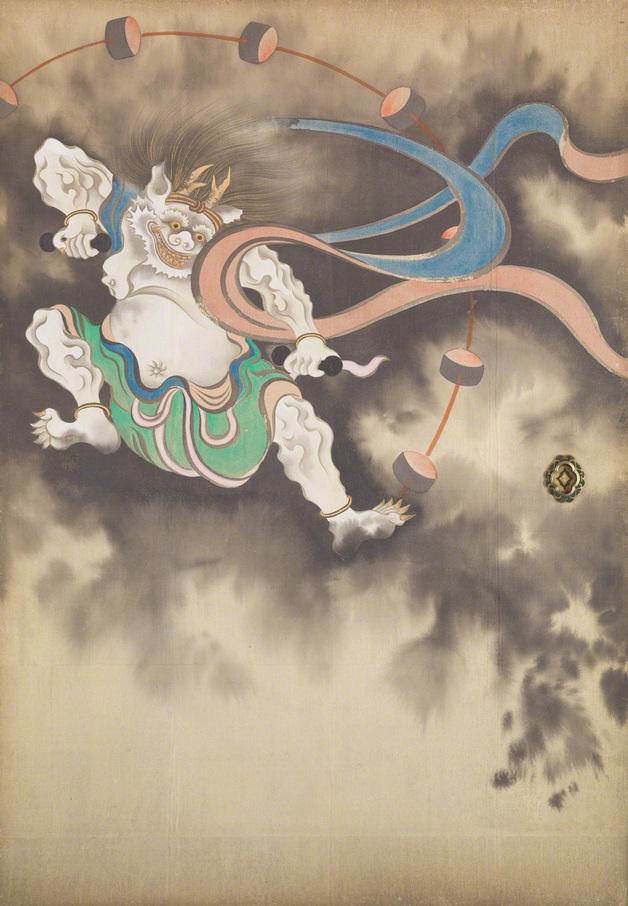 Pretty soon the storm rattled very near him, and he thought he had better seek shelter, lest the thunder should strike and kill him. For Bimbo, like all his neighbors, had often heard stories of Raijin, the god of the thunder-drums, who lives in the skies and rides on the storm, and sometimes kills people by throwing out of the clouds at them a terrible creature like a cat, with iron-like claws and a hairy body.

Just as Bimbo threw his hoe over his shoulder and started to move, a terrible blinding flash of lightning dazzled his eyes. It was immediately followed by a deafening crash, and the thunder fell just in front of him. He covered his eyes with his hands, but finding himself unhurt, uttered a prayer of thanks to Buddha for safety. Then he uncovered his eyes and looked down at his feet.

There lay a little boy, rosy and warm, and crowing in the most lively manner, and never minding the rain in the least. The farmer’s eyes opened very wide, but happy and nearly surprised out of his senses, he picked up the child tenderly in his arms, and took him home to his old wife.

“Here’s a gift from Raijin,” said Bimbo. “We’ll adopt him as our own son and call him Rai-taro,” (the first-born darling of the thunder).

So the boy grew up and became a very dutiful and loving child. He was as kind and obedient to his foster-parents as though he had been born in their house. He never liked to play with other children, but kept all day in the fields with his father, sporting with the rivulet and looking at the clouds and sky. Even when the strolling players of the Dai Kagura (the comedy which makes the gods laugh) and the “Lion of Corea” came into the village, and every boy and girl and nurse and woman was sure to be out in great glee, the child of the thunder stayed up in the field, or climbed on the high rocks to watch the sailing of the birds and the flowing of the water and the river far away.

Great prosperity seemed to come to the farmer, and he laid it all to the sweet child that fell to him from the clouds. It was very curious that rain often fell on Bimbo’s field when none fell elsewhere; so that Bimbo grew rich and changed his name to Kanemochi. He believed that the boy Raitaro beckoned to the clouds, and they shed their rain for him.

A good many summers passed by, and Raitaro had grown to be a tall and handsome lad, almost a man and eighteen years old. On his birthday the old farmer and the good wife made a little feast for their foster-child. They ate and drank and talked of the thunder-storm, out of which Raitaro was born.

“My dear parents, I thank you very much for your kindness to me, but I must now say farewell. I hope you will always be happy.”

Then, in a moment, all trace of a human form disappeared, and floating in the air, they saw a tiny white dragon, which hovered for a moment above them, and then flew away. The old couple went out of doors to watch it, when it grew bigger and bigger, taking its course to the hills above, where the piled-up white clouds, which form on a summer’s afternoon, seemed built up like towers and castles of silver. Towards one of these the dragon moved, until, as they watched his form, now grown to a mighty size, it disappeared from view.

After this Kanemochi and his wife, who were now old and white-headed, ceased from their toil and lived in comfort all their days. When they died and their bodies were reduced to a heap of white cinders in the stone furnace of the village cremation-house, their ashes were mixed, and being put into one urn, were laid away in the cemetery of the temple yard. Their tomb was carved in the form of a white dragon, which to this day, in spite of mosses and lichens, may still be seen among the ancient monuments of the little hamlet.

Prev Story The Dream Story of Gojiro
Next Story