Once upon a time there was a boy named Rupert, the sharpest and most prudent lad in his village, and indeed in any of those to be found for twenty leagues around.

One night he was with a group of boys of his own age, who, gathered round the fire, were listening with amazement to a veteran soldier, covered with scars, which had gained him the modest stripes of a sergeant pensioner, and who was telling the story of his adventures. The narrator was at the most interesting point of his tale.

“The great City of Fortune,” he said, “is situated on the summit of a very high mountain, so steep that only very few have succeeded in reaching the top. There gold circulates in such abundance that the inhabitants do not know what to do with the precious metal. Houses are built of it, the walls of the fortress are of solid silver, and the cannons which defend it are enormous pierced diamonds. The streets are paved with duros, always new, because as soon as they begin to lose their brilliance they are replaced by others just minted.

“You ought to see the cleanliness of it! What dirt there is is pure gold dust, which the dust carts collect in order to throw in large baskets into the drains.

“The pebbles against which we stumble continually are brilliants as large as nuts, despised on account of the extraordinary abundance with which the soil supplies them. In a word, he who lives there may consider the most powerful of the earth as beggars.

“The worst of it is that the path which leads there is rough and difficult, and most people succumb without having been able to arrive at the city of gold.”

Rupert did not let the words of the soldier go in at one ear and out at the other; and so it was that, hardly had the occasion of being alone with him arisen before he inquired:

“Do you know the way to this enchanted city?”

“I should rather think so, my son; but I do not advise you to try the journey.”

“The way is long and rocky. I came back the first day, startled at the difficulties which must be overcome. But anyhow, if you are resolved to go, I must give you the following warning. In order to get to Fortune there are two paths: a very broad one, full of stones and crags; if you go that way the sharp points of the pebbles will tear your feet to pieces and you will be crushed by fatigue. A thousand terrible difficulties will arise to meet you; you will have to struggle with cruel enemies, and if, at last, you succeed in vanquishing all, you will arrive at Fortune already old and worn, when riches will be of no use to you. The other path is level and short, but…”

“Enough! Do not say any more; show me it now, and I will look after the rest.”

“All right, all right! I will show it to you, and God grant that your not having wished to hear me to the end will not bring you suffering.”

And the little rogue, without saying good-bye to his parents or his brother, began to walk in the direction the old soldier had shown him; and went on and on, happier than a sand-boy, thinking of the riches which awaited him, and which he already believed to have within reach of his hand.

At the end of two days he arrived at the bank of a large river. On it was a boat, and in the boat a negro of colossal stature.

Our lad approached the boatmen and asked him:

“Good man, is this the way to Fortune?”

“Yes, little boy, but it is necessary to cross the river.”

“Good, then take me across.”

“Do you know how much it costs?”

“But do I look as if I had them, or had even seen them in my life? Be kind and take me over for nothing.”

“This river, my little friend, is never crossed gratis. It is the first step towards Fortune and it must be paid for somehow. If you have no money, never mind; let me cut off a little piece of your heart. Perhaps it will hurt you a bit at first, but later you will feel as if you were whole.”

Rupert allowed the negro to open his chest and to take out a piece of his heart. When he crossed to the other side he gave a sigh of satisfaction. The first step was taken, and he already saw the beautiful City of Fortune, whose resplendent walls sent out lovely reflections. But he noticed that he was much less anxious to arrive at the city of gold and had a strange emptiness in his chest. Withal, he continued his walk; but he had not taken a hundred steps when a new difficulty arose to obstruct the way. This stretched between two inaccessible mountains and the entrance to the defile was kept by another guardian as black as the one of the boat.

“Where are you going, boy?” he asked our lad.

“To the City of Fortune.”

“Quite so, this is the way; but you have to pay for the passage. The payment is a little piece of heart.”

Without hesitating, Rupert opened his chest and left a handful of fibres of that organ of life in the hands of the terrible gate-keeper.

And he went on and on towards the city, which each time showed itself nearer and more beautiful to his eyes. But each time he felt less anxiety to arrive.

Still he had not finished with the difficulties. The path soon shortened, forming a terrible ravine; only to think of crossing it was more than he could dream of. Rupert believed his hopes broken, and sat down disheartened on a stone.

At that moment a vulture of great size came down from the top of a mountain and, drawing near him, said:

“Do you wish to go across? Well, give me a piece of your heart.”

“Take it, and carry me over,” said Rupert, desperate. 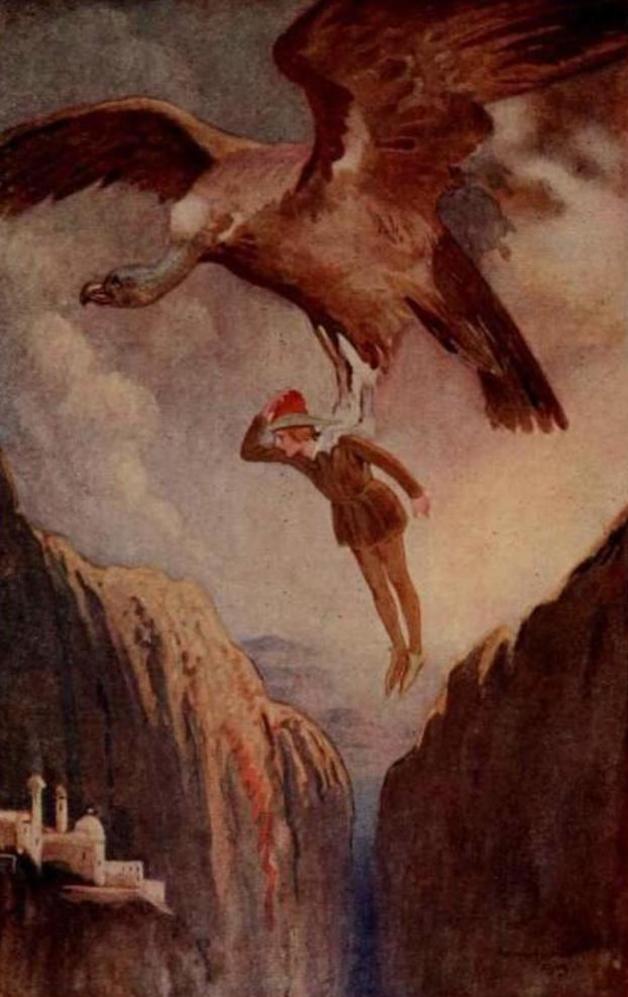 “The vulture carried him to the other side of the abyss.” Illustration by W. Matthews, published in Fairy Tales form Spain by Jose Munez Escomez (1913), J.M. Dent and Sons.

The vulture thrust its beak into Rupert’s chest and took out a good piece of heart. At once it seized our lad with its claws and carried him to the other side of the abyss.

Now he was at the very gates of Fortune. He could already count the number of towers which raised themselves above the high walls, and took his happiness for granted—if that consists in money. At the gate they stopped him. There heart was contraband, and therefore they took out what remained of it and put a pretty one inside of him, made of steel, but hard as a diamond. Only one little fibre escaped their search, which passed unnoticed behind the metal heart.

“At last I am inside,” said Rupert to himself; but, strangely enough, the city of gold produced neither surprise nor joy.

“What do I want riches for?” he exclaimed, “if I have lost my heart and with it my illusions?” And he walked through the city, looking with great disdain at those riches which were within reach of his hand and which so much tempted his ambition before.

That dazzling brilliance began to disturb him.

“Here it seems,” he said to himself, “there is nothing else but gold. Cursed metal, which has cost me my heart. Goodness me! Who will give me back my little heart?”

He looked for friends, but did not succeed in finding them, because those people had hearts of steel, and Rupert felt that that little fibre that remained of his own made him suffer atrociously.

Without friends or affection, in that city of gold, Rupert remembered his parents and his brother and bitterly lamented his fate.

And then he resolved to return to the little white house of his own village and to live in it as God had ordered. On going out of the city he felt a strange joy. But that accursed steel heart made him suffer horribly, only the little fibre which remained of his own beat for joy in his breast. He took the first path he found, and then encountered no difficulties. It seemed that wings had grown on his feet. He went down hill, and so walked very quickly. When he arrived at his village he was as poor as before, and moreover that cold, hard heart did not let him breathe. It beat with the regularity of a clock, tic-tac, tic-tac!

His brother was the first to come out and meet him, full of joy. He embraced him, kissed him, and accompanied him home, transported with gladness.

But the steel heart did not allow Rupert to rejoice. Tears did nor run to his eyes, and his chest felt as if a hand was pressing on it.

His old father strained him to his bosom, but not even he succeeded in moving that hard heart. Rupert felt an extraordinary anguish.

But his mother arrived running, out of breath, towards her son, and embraced him weeping, and her tears fell on Rupert’s heart. Then, oh, the power of a mother’s love! That steel heart quickened its beats and, unable to resist any longer, jumped out, just as a broken spring of a watch jumps out. The little fibre was already a new heart and Rupert a happy man.

And when they spoke to him of riches he said:

“God will give them if he deem it right, but don’t seek them by short cuts at the expense of your heart and illusions.”

The Boy, the Coyote, and the Magic Rock

Prev Story The Garden of Health
Next Story

The Boy, the Coyote, and the Magic Rock