There was once a king, who had lost his wife. They had a family of thirteen—twelve gallant sons, and one daughter, who was exquisitely beautiful.

For twelve years after his wife’s death the king grieved very much; he used to go daily to her tomb, and there weep, and pray, and give away alms to the poor. He thought never to marry again; for he had promised his dying wife never to give her children a stepmother.

One day, when visiting his dead wife’s grave as usual, he saw beside him a maiden so entrancingly fair, that he fell in love with her, and soon made her his second queen. But before long he found out that he had made a great mistake. Though she was so beautiful she turned out to be a wicked sorceress, and not only made the king himself unhappy, but proved most unkind to his children, whom she wished out of the way, so that her own little son might inherit the kingdom.

One day, when the king was far away, at war against his enemies, the queen went into her stepchildren’s apartments, and pronounced some magical words—on which every one of the twelve princes flew away in the shape of an eagle, and the princess was changed into a dove. 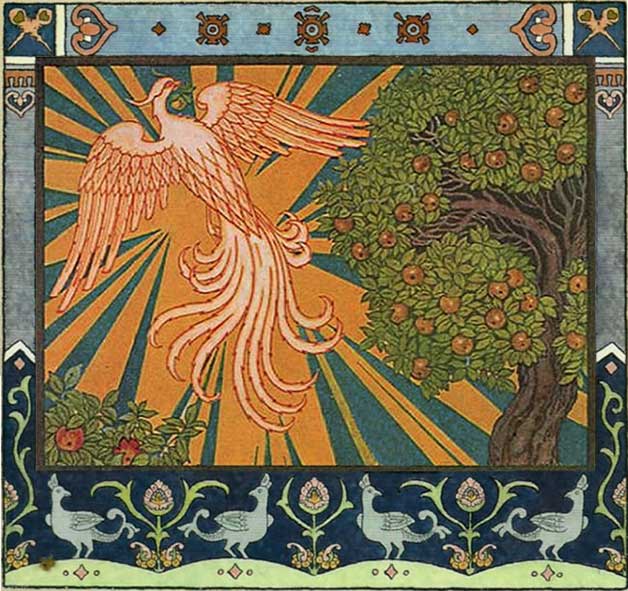 The queen looked out of the window, to see in what direction they would fly, when she saw right under the window an old man, with a beard as white as snow.

“What are you here for, old man?” she asked.

“To be witness of your deed,” he answered.

“Then be what I command!”

She whispered some magical words. The old man disappeared in a blaze of sunshine; and the queen, as she stood there, dumb with terror, was changed into a basilisk.

The basilisk ran off in fright; trying to hide herself underground. But her glance was so deadly, that it killed every one she looked at; so that all the people in the palace were soon dead, including her own son, whom she slew by merely looking at him. And this once populous and happy royal residence quickly became an uninhabited ruin, which no one dared approach, for fear of the basilisk lurking in its underground vaults.

Meanwhile the princess, who had been changed into a dove, flew after her brothers the eagles, but not being able to overtake them, she rested under a wayside cross, and began cooing mournfully.

“What are you grieving for, pretty dove?” asked an old man, with a snow-white beard, who just then came by.

“I am grieving for my poor dear father, who is fighting in the wars far away; for my loved brothers, who have flown away from me into the clouds. I am grieving also for myself. Not long ago I was a happy princess; and now I must wander over the world as a dove, to hide from the birds of prey—and be parted for ever from my dear father and brothers!”

“You may grieve and weep, little dove; but do not lose hope,” said the old man. “Sorrow is only for a time, and all will come right in the end.”

So saying he stroked the little dove, and she at once regained her natural shape. She kissed the old man’s hand in her gratitude, saying:

“How can I ever thank you enough! But since you are so kind, will you not tell me how to rescue my brothers?”

The old man gave her an ever-growing loaf, and said:

“This loaf is enough to sustain, not only you, but a thousand people for a thousand years, without ever diminishing. Go towards the sunset, and weep your tears into this little bottle. And when it is full….”

And the old man told her what else to do, blessed her, and disappeared.

The princess travelled on towards the sunset; and in about a year she reached the boundary of the next world, and stood before an iron door, where Death was keeping guard with his scythe.

“Stop, princess!” he said; “You can proceed no further, for you are not yet parted by death from your own world.”

“But what am I to do?” she asked. “Must I go back without my poor brothers?”

“Your brothers,” said Death, “fly here every day in the guise of eagles. They want to reach the other side of this door, which leads into the other world; for they hate the one they live in; nevertheless they, and you also, must remain there, until your time be come. Therefore every day I must compel them to go back, which they can do, because they are eagles. But how are you going to get back yourself?—look there!”

The princess looked around her, and wept bitterly. For though she had not perceived this before, nor seen how she got there, she saw now that she was in a deep abyss, shut in on all sides by such high precipices, that she wondered how her brothers, even with eagle wings, could fly to the top.

But remembering what the mysterious old man had said she took courage, and began to pray and weep, till she had filled the little bottle with her tears. Soon she heard the sound of wings over her head, and saw twelve eagles flying.

The eagles dashed themselves against the iron portal, beating their wings upon it, and imploring Death to open it to them. But Death only threatened them with his scythe, saying:

“Hence! ye enchanted princes! you must fulfil your penance on earth, till I come for you myself.”

The eagles were about to turn and fly, when all at once they perceived their sister. They came round her, and caressed her hands lovingly with their beaks.

She at once began to sprinkle them with her tears from the lachrymatory; and in one moment the twelve eagles were changed back into the twelve princes, and joyfully embraced their sister.

The princess then fed them all round from her ever-growing loaf; but when their hunger was appeased they began to be troubled as to how they were to ascend from the abyss, since they had no longer eagles’ wings to fly up.

But the princess knelt down and prayed:

“Bird of heavenly pity here, By each labour, prayer and tear, Come in thine unvanquished power, Come and aid us in this hour!”

And all at once there shot down from heaven to the depth of the abyss a ray of sunshine, on which descended a gigantic bird, with rainbow wings, a bright sparkling crest, and peacock’s eyes all over his body, a golden tail, and silvery breast.

“What are your commands, princess?” asked the bird.

“Carry us from this threshold of eternity to our own world.”

“I will, but you must know, princess, that before I can reach the top of this precipice with you on my back, three days and nights must pass; and I must have food on the way, or my strength will fail me, and I shall fall down with you to the bottom, and we shall all perish.”

“I have an ever-growing loaf, which will suffice both for you and ourselves,” replied the princess.

“Then climb upon my back, and whenever I look round, give me some bread to eat.”

The bird was so large that all the princes, and the princess in the midst of them, could easily find place on his back, and he began to fly upwards.

He flew higher and higher, and whenever he looked round at her, she gave him bits of the loaf, and he flew on, and upwards.

So they went on steadily for two nights and days; but upon the third day, when they were hoping in a short time to view the summit of the precipice, and to land upon the borders of this world, the bird looked round as usual for a piece of the loaf.

The princess was just going to break off some to give him, when a sudden violent gust of wind from the bottom of the abyss snatched the loaf from her hand, and sent it whistling downwards.

Not having received his usual meal the bird became sensibly weaker, and looked round once more.

The princess trembled with fear; she had nothing more to give him, and she felt that he was becoming exhausted. In utter desperation she cut off a piece of her flesh, and gave it to him.

Having eaten this the bird recovered strength, and flew upwards faster than before; but after an hour or two he looked round once more.

So she cut off another piece of her flesh; the bird seized it greedily, and flew on so fast that in a few minutes he reached the ground at the top of the precipice. When they alighted, and he asked her:

“Princess, what were those two delicious morsels you gave me last? I never ate anything so good before.”

“They were part of my flesh, I had nothing else for you,” replied the princess in a faint voice, for she was swooning away with pain and loss of blood.

The bird breathed upon her wounds; and the flesh at once healed over, and grew again as before. Then he flew up again to heaven, and was lost in the clouds.

The princess and her brothers resumed their journey, this time towards the sunrise, and at last arrived in their own country, where they met their father, returning from the wars.

The king was coming back victorious over his enemies, and on his way home had first heard of the sudden disappearance of his children and of the queen, and how his palace was tenanted only by a basilisk with a death-dealing glance.

He was therefore most surprised and overjoyed to meet his dear children once more, and on the way his daughter told him all that had come to pass.

When they got back to the palace the king sent one of his nobles with a looking-glass down into the underground vaults. The basilisk saw herself reflected in this mirror, and her own glance slew her immediately.

They gathered up the remains of the basilisk, and burnt them in a great fire in the courtyard, afterwards scattering the ashes to the four winds. When this was done the king, his sons, and his daughter, returned to live in their former home and were all as happy as could be ever after.

Prev Story The Whirlwind
Next Story

Prev Story The Whirlwind
Explore our fairy tale collections on