Fairytalez.com » Elphinstone Dayrell » The Elephant and the Tortoise; or, Why the Worms are Blind and Why the Elephant has Small Eyes

When Ambo was king of Calabar, the elephant was not only a very big animal, but he had eyes in proportion to his immense bulk. In those days men and animals were friends, and all mixed together quite freely. At regular intervals King Ambo used to give a feast, and the elephant used to eat more than any one, although the hippopotamus used to do his best; however, not being as big as the elephant, although he was very fat, he was left a long way behind.

As the elephant ate so much at these feasts, the tortoise, who was small but very cunning, made up his mind to put a stop to the elephant eating more than a fair share of the food provided. He therefore placed some dry kernels and shrimps, of which the elephant was very fond, in his bag, and went to the elephant’s house to make an afternoon call.

When the tortoise arrived the elephant told him to sit down, so he made himself comfortable, and, having shut one eye, took one palm kernel and a shrimp out of his bag, and commenced to eat them with much relish. 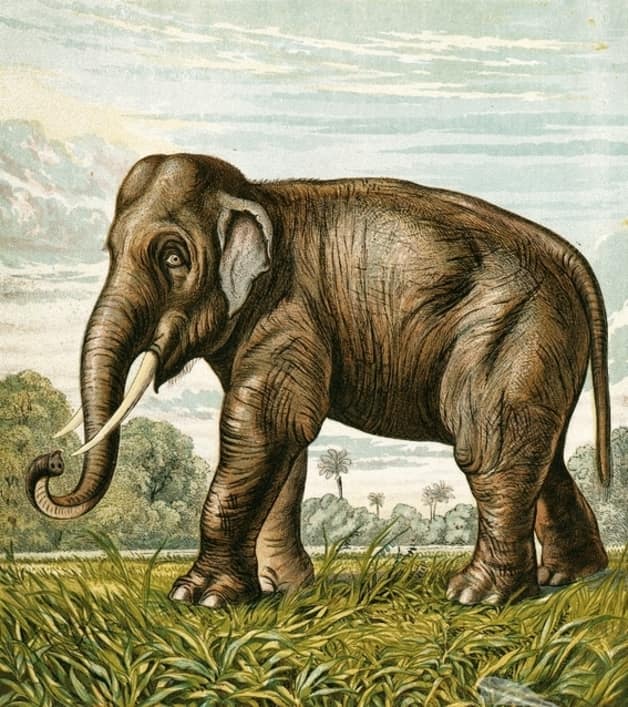 When the elephant saw the tortoise eating, he said, as he was always hungry himself, “You seem to have some good food there; what are you eating?”

The tortoise replied that the food was “sweet too much,” but was rather painful to him, as he was eating one of his own eyeballs; and he lifted up his head, showing one eye closed.

The elephant then said, “If the food is so good, take out one of my eyes and give me the same food.”

The tortoise, who was waiting for this, knowing how greedy the elephant was, had brought a sharp knife with him for that very purpose, and said to the elephant, “I cannot reach your eye, as you are so big.”

The next morning, when the elephant heard the people passing, he asked them what the time was, and the bush buck, who was nearest, shouted out, “The sun is now up, and I am going to market to get some yams and fresh leaves for my food.”

Then the elephant perceived that the tortoise had deceived him, and began to ask all the passers-by to lend him a pair of eyes, as he could not see, but every one refused, as they wanted their eyes themselves. At last the worm grovelled past, and seeing the big elephant, greeted him in his humble way. He was much surprised when the king of the forest returned his salutation, and very much flattered also.

The elephant said, “Look here, worm, I have mislaid my eyes. Will you lend me yours for a few days? I will return them next market-day.”

The worm was so flattered at being noticed by the elephant that he gladly consented, and took his eyes out—which, as every one knows, were very small—and gave them to the elephant. When the elephant had put the worm’s eyes into his own large eye-sockets, the flesh immediately closed round them so tightly that when the market-day arrived it was impossible for the elephant to get them out again to return to the worm; and although the worm repeatedly made applications to the elephant to return his eyes, the elephant always pretended not to hear, and sometimes used to say in a very loud voice, “If there are any worms about, they had better get out of my way, as they are so small I cannot see them, and if I tread on them they will be squashed into a nasty mess.”

Ever since then the worms have been blind, and for the same reason elephants have such small eyes, quite out of proportion to the size of their huge bodies

Why the Worms Live Underneath the Ground

Prev Story Why a Hawk Kills Chickens
Next Story

Why the Worms Live Underneath the Ground