Fairytalez.com » A Treasury of Eskimo Tales » The Flight to the Moon

A powerful conjurer, who had a bear for his mascot, thought he would like to go to the Moon. He had his hands tied up and a rope fastened around his knees and neck. Then he sat down at the rear of his hut with his back to the lamps and had the light extinguished.

He called for his mascot, and the bear at once appeared and he mounted its back. Up it carried him, above the village, above the mountains, up and up till they reached the Moon. To his surprise, the Moon was a house which was covered with beautiful white deerskins. Now white deer are strange and sacred and are hatched from long white eggs buried deep in the soil. There is mystery and magic in white deer, white buffalo, and in all albino animals. The Man in the Moon dried these white deerskins and fastened them over his house, which, as I said, is the Moon itself. 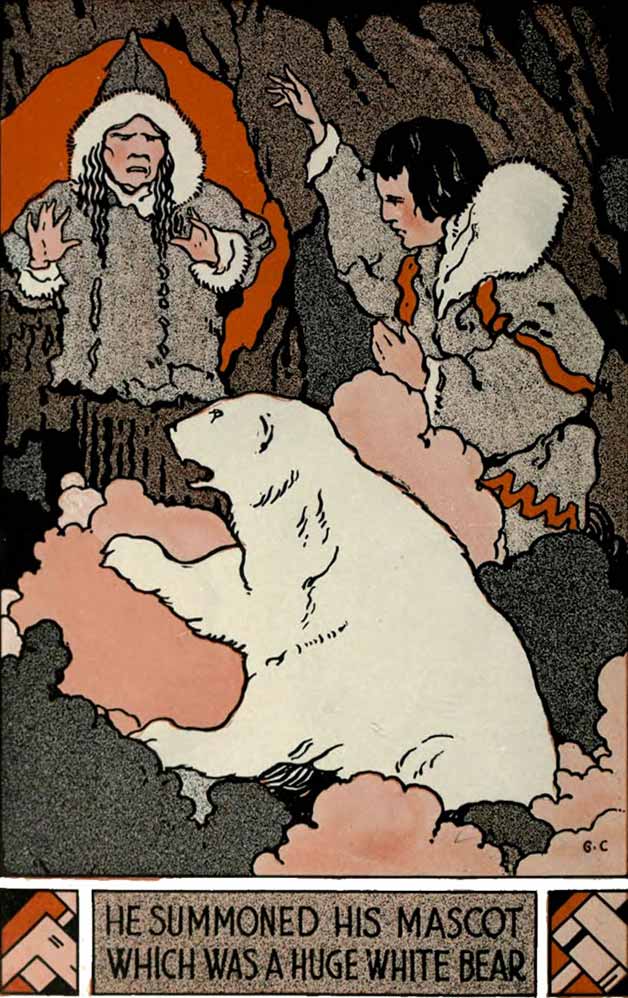 Illustration by George Carlson. Published in A Treasury of Eskimo Tales by Clara k. Bayliss, 1922.

On each side of the door to the house was the upper part of an enormous walrus. The beasts were alive, and they threatened to tear the visitor in pieces. It was very dangerous to try to pass the fierce animals, but the conjurer told his mascot to growl as loud as it could, and that startled the walruses for an instant, and in that instant the man slipped in.

It must be chilly in the Moon, for the house had a passageway to keep out the cold, just as the Eskimo houses have. In this passageway was a red-and-white spotted dog, the only dog which the Man in the Moon keeps. The man went on past this dog and into the inner room. There at the left he saw a door into another building in which sat a beautiful woman with a lamp before her. As soon as she saw the stranger she blew on her fire and made it flash up, and she hid behind the blaze; but he had seen enough so that he knew she was the Sun.

The Man in the Moon rose from his seat on the ledge and came over to shake hands with the visitor and welcome him. Behind the lamps there was a great heap of venison and seal meat, but the Man in the Moon did not offer his guest any of it, which is not the way the Eskimo and Indians treat their guests. The Man in the Moon seemed to have a different idea of hospitality, for he immediately said:

“My wife, Ulul, will soon be here and we will have a dance. Mind you don’t laugh, or she will slice you in two with her knife and feed you to my ermine which is in yon little house outside.”

Before long a woman entered carrying an oblong chopping-bowl in which lay her chopping-knife. She set it down and stooped forward, turning the bowl as if it were a whirligig. Then she commenced dancing; and when she turned her back toward the stranger he saw that she was hollow. She had no back, backbone, or insides, but only lungs and heart.

Her husband presently joined in the dance, and their attitudes and grimaces were so ludicrous that the stranger could scarcely keep from laughing. He did not wish to be impolite, so he kept turning his face aside and pretending to cough. Fortunately for him, just as he thought he would surely explode with laughter, he recalled the warning the man had given him and rushed out of the house. The Man guessed what was the matter with him, and called out:

He did so, and escaped unhurt.

However, he went into the house another day and succeeded in keeping his face straight, so when their performance was ended the Man in the Moon was very friendly to him and showed him all around the house and let him look into a small building near the entrance.

In this building there were large herds of deer which seemed to be roaming over vast plains. The Man in the Moon said, “You may choose one of these for your own,” and as soon as he did so the animal fell through a hole and alighted on the earth right by the conjurer’s hut.

In another building there were many seals swimming in an ocean, and he was allowed to choose one of these, which also fell down to his hut.

“Now you have seen all I can show you, and you may go home,” said the Moon Man. So the conjurer called his mascot and rode down through the air to his hut.

There his body had lain motionless while his spirit was away, but now it revived. The cords with which his hands and knees had been bound dropped off, though they had been tied in hard knots. The conjurer felt quite exhausted from his trip, but when the lamps were lighted he told his eager neighbors all that he had seen during his flight to the Moon.

Prev Story What the Man in the Moon Did
Next Story