Fairytalez.com » Green Willow and Other Japanese Fairy Tales » The Flute

Long since, there lived in Yedo a gentleman of good lineage and very honest conversation. His wife was a gentle and loving lady. To his secret grief, she bore him no sons. But a daughter she did give him, whom they called O’Yoné, which, being interpreted, is “Rice in the ear.” Each of them loved this child more than life, and guarded her as the apple of their eye. And the child grew up red and white, and long-eyed, straight and slender as the green bamboo.

When O’Yoné was twelve years old, her mother drooped with the fall of the year, sickened, and pined, and ere the red had faded from the leaves of the maples she was dead and shrouded and laid in the earth. The husband was wild in his grief. He cried aloud, he beat his breast, he lay upon the ground and refused comfort, and for days he neither broke his fast nor slept. The child was quite silent.

Time passed by. The man perforce went about his business. The snows of winter fell and covered his wife’s grave. The beaten pathway from his house to the dwelling of the dead was snow also, undisturbed save for the faint prints of a child’s sandalled feet. In the spring-time he girded up his robe and went forth to see the cherry blossom, making merry enough, and writing a poem upon gilded paper, which he hung to a cherry-tree branch to flutter in the wind. The poem was in praise of the spring and of saké. Later, he planted the orange lily of forgetfulness, and thought of his wife no more. But the child remembered.

Before the year was out he brought a new bride home, a woman with a fair face and a black heart. But the man, poor fool, was happy, and commended his child to her, and believed that all was well.

Now because her father loved O’Yoné, her stepmother hated her with a jealous and deadly hatred, and every day she dealt cruelly by the child, whose gentle ways and patience only angered her the more. But because of her father’s presence she did not dare to do O’Yoné any great ill; therefore she waited, biding her time. The poor child passed her days and her nights in torment and horrible fear. But of these things she said not a word to her father. Such is the manner of children.

Now, after some time, it chanced that the man was called away by his business to a distant city. Kioto was the name of the city, and from Yedo it is many days’ journey on foot or on horseback. Howbeit, go the man needs must, and stay there three moons or more. Therefore he made ready, and equipped himself, and his servants that were to go with him, with all things needful; and so came to the last night before his departure, which was to be very early in the morning.

He called O’Yoné to him and said: “Come here, then, my dear little daughter.” So O’Yoné went and knelt before him.

“What gift shall I bring you home from Kioto?” he said.

But she hung her head and did not answer.

“Answer, then, rude little one,” he bade her. “Shall it be a golden fan, or a roll of silk, or a new obi of red brocade, or a great battledore with images upon it and many light-feathered shuttlecocks?”

“But, my sweet, I needs must,” he answered, “and soon I shall be back—so soon, scarcely it will seem that I am gone, when I shall be here again with fair gifts in my hand.”

“Father, take me with you,” she said.

“Alas, what a great way for a little girl! Will you walk on your feet, my little pilgrim, or mount a pack-horse? And how would you fare in the inns of Kioto? Nay, my dear, stay; it is but for a little time, and your kind mother will be with you.”

She shuddered in his arms.

“Father, if you go, you will never see me more.”

Then the father felt a sudden chill about his heart, that gave him pause. But he would not heed it. What! Must he, a strong man grown, be swayed by a child’s fancies? He put O’Yoné gently from him, and she slipped away as silently as a shadow. 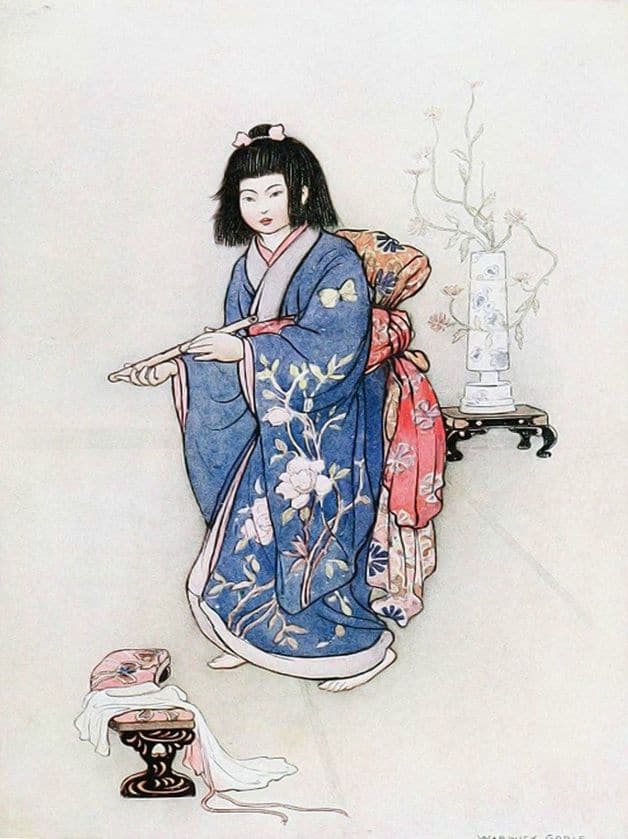 “She came to him before sunrise with a little flute in her hand, fashioned of bamboo and smoothly polished.” Illustration by Warwick Goble, published in Green Willow and Other Japanese Fairy Tales by Grace Jones (1910), Macmillan and Co.

But in the morning she came to him before sunrise with a little flute in her hand, fashioned of bamboo and smoothly polished. “I made it myself,” she said, “from a bamboo in the grove that is behind our garden. I made it for you. As you cannot take me with you, take the little flute, honourable father. Play on it sometimes, if you will, and think of me.” Then she wrapped it in a handkerchief of white silk, lined with scarlet, and wound a scarlet cord about it, and gave it to her father, who put it in his sleeve. After this he departed and went his way, taking the road to Kioto. As he went he looked back thrice, and beheld his child, standing at the gate, looking after him. Then the road turned and he saw her no more.

The city of Kioto was passing great and beautiful, and so the father of O’Yoné found it. And what with his business during the day, which sped very well, and his pleasure in the evening, and his sound sleep at night, the time passed merrily, and small thought he gave to Yedo, to his home, or to his child. Two moons passed, and three, and he made no plans for return.

One evening he was making ready to go forth to a great supper of his friends, and as he searched in his chest for certain brave silken hakama which he intended to wear as an honour to the feast, he came upon the little flute, which had lain hidden all this time in the sleeve of his travelling dress. He drew it forth from its red and white handkerchief, and as he did so, felt strangely cold with an icy chill that crept about his heart. He hung over the live charcoal of the hibachi as one in a dream. He put the flute to his lips, when there came from it a long-drawn wail.

He dropped it hastily upon the mats and clapped his hands for his servant, and told him he would not go forth that night. He was not well, he would be alone. After a long time he reached out his hand for the flute. Again that long, melancholy cry. He shook from head to foot, but he blew into the flute. “Come back to Yedo … come back to Yedo…. Father! Father!” The quavering childish voice rose to a shriek and then broke.

A horrible foreboding now took possession of the man, and he was as one beside himself. He flung himself from the house and from the city, and journeyed day and night, denying himself sleep and food. So pale was he and wild that the people deemed him a madman and fled from him, or pitied him as the afflicted of the gods. At last he came to his journey’s end, travel-stained from head to heel, with bleeding feet and half-dead of weariness.

His wife met him in the gate.

He said: “Where is the child?”

“The child…?” she answered.

The woman laughed: “Nay, my lord, how should I know? She is within at her books, or she is in the garden, or she is asleep, or mayhap she has gone forth with her playmates, or …”

He said: “Enough; no more of this. Come, where is my child?”

Then she was afraid. And, “In the Bamboo Grove,” she said, looking at him with wide eyes.

There the man ran, and sought O’Yoné among the green stems of the bamboos. But he did not find her. He called, “Yoné! Yoné!” and again, “Yoné! Yoné!” But he had no answer; only the wind sighed in the dry bamboo leaves. Then he felt in his sleeve and brought forth the little flute, and very tenderly put it to his lips. There was a faint sighing sound. Then a voice spoke, thin and pitiful:

With his own two-handed sword the man did justice, and slew his wicked wife, avenging the death of his innocent child. Then he dressed himself in coarse white raiment, with a great rice-straw hat that shadowed his face. And he took a staff and a straw rain-coat and bound sandals on his feet, and thus he set forth upon a pilgrimage to the holy places of Japan.

And he carried the little flute with him, in a fold of his garment, upon his breast.

Prev Story The Tea-Kettle
Next Story

Prev Story The Tea-Kettle
Explore our fairy tale collections on