Fairytalez.com » The Russian Garland » The Judgment of Shemyaka

Two brothers once lived upon a little plot of ground—one rich, the other poor. The poor brother went to the rich one to beg of him a horse that he might fetch wood from the forest. His brother gave him the horse; but the poor one begged of him likewise a horse-collar, whereat the other was angry and would not give it him. So the poor fellow in his trouble fastened the sledge to the horse’s tail and thus drove to the forest, and got such a load of wood that the horse had scarcely strength to draw it. When he came home, he opened the gate, but forgot to remove the foot-board, fastened to the side posts to keep the snow from coming in under the door; and the horse stumbled against the board and lost his tail. The poor fellow took the horse back, but when his brother saw the beast without a tail, he would not have him, and set out to go before the judge, Shemyaka, to make a complaint. The poor man saw that he would fall into trouble, and the judge would send for him: he considered for a long while that he had nothing to give, and he followed his brother on foot.

On the way, as night came on, they stopped at the house of a merchant. The rich brother was taken in to supper and well treated, but the poor man was not given anything to eat, and had to take his night’s rest on the kitchen stove. All night he was tossing and rolling about hungry, and at last he fell off the stove on to a cradle lying beside it, and killed the merchant’s baby in the fall. So the merchant was very angry, and next morning went with him to get the poor man punished by the judge Shemyaka.

It so happened that on the way to town the party had to go over a bridge, and the poor man was so frightened at the thought of what the judge Shemyaka might do to him that he threw himself over the bridge, to put an end to his life; but just at that instant a young man was driving his sick father to the bath-house, and the poor man fell upon the sledge and crushed the old man. So the son went with the rich brother and the merchant to the judge to make his complaint that the poor man had killed his father. 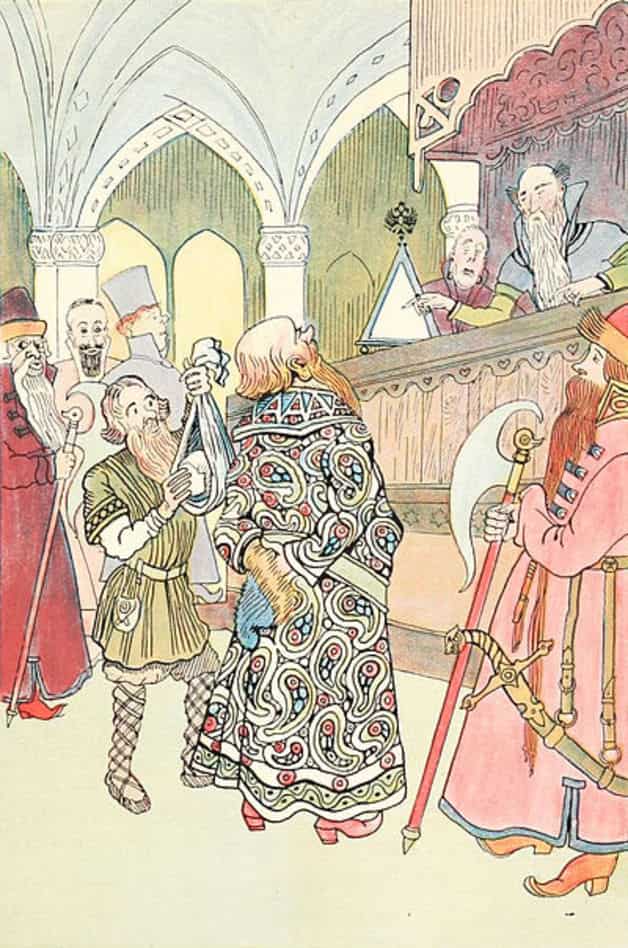 “The judge thought the towel was full of roubles.” Illustration by J.R. Rosciezewksi, published in The Russian Garland of Fairy Tales by Robert Steel (1916), Robert McBride and Company

The rich brother came first before the judge Shemyaka and complained that his brother had pulled off the tail of his horse. The poor man took a stone and tied it in a towel; and, standing up behind his brother, he held it up to the judge, intending to kill him unless he decided in his favour. The judge thought that the towel was filled with roubles, and so he ordered the rich man to give back the horse to the poor one until his tail had grown again.

Then the merchant came up to complain of the death of his baby, and the poor man again brandished his heavy towel before the judge, and because he hoped for another bribe the judge said: “You must send your wife to the poor man’s house till she has another baby, and then you will be as well off as before.”

Then the son came and accused the poor man of having crushed his father to death, and asked the judge for justice. The poor man took up the stone again, and showed it as before to the judge, who fancied that the man would perhaps give him for this charge another hundred roubles. So he ordered the son to stand on the bridge while the poor man passed under it; and that the son should in like manner leap down upon the poor man and crush him.

So the poor brother came to the rich one to fetch the horse without a tail, according to the judge’s sentence, and to keep it until the tail grew again. The rich man was very loth to give up the horse, and instead, made him a present of five roubles, three bushels of corn, and a milch goat, and thus they settled their quarrel.

So then the poor man went to the merchant to take his wife away from him, and the merchant offered him fifty roubles, a cow with her calf, a mare with her foal, and five measures of grain, which he willingly accepted.

Then the poor man went to the son and said: “Come, the judge has said that you must place yourself on the bridge while I stand under it, and you must throw yourself down on me and kill me.” Then the son thought to himself: “Who knows but that, if I throw myself from the bridge, I may, perhaps, instead of falling on this man, dash myself to pieces.” So he tried to make peace with the poor man, and gave him two hundred roubles, a horse, and five measures of corn.

But the judge Shemyaka sent his servant to the poor man to ask for the three hundred roubles. The poor man showed him the stone and said: “If the judge had not decided in my favour I should have killed him.” So the servant went back to the judge and told him what the poor man had said; whereat the judge, overjoyed, exclaimed: “Heaven be thanked that I decided in this man’s favour!”

Prev Story Story of Prince Peter with the Golden Keys, and the Princess Magilene
Next Story

Prev Story Story of Prince Peter with the Golden Keys, and the Princess Magilene
Explore our fairy tale collections on