No bird is more common in Korea than the magpie. They are numbered by millions. Every day in the year, except the seventh day of the seventh month, the air is full of them. On that date, however, they have a standing engagement every year. They are all expected to be away from streets and houses, for every well-bred magpie is then far up in the sky building a bridge across the River of Stars, called the Milky Way. With their wings for the cables, and their heads to form the floor of the bridge, they make a pathway for lovers on either side of the Silver Stream.

Boys and girls are usually very kind to the magpies, but if a single one be found about the houses,on the roofs, or in the streets on the seventh of August, woe betide it! Every dirty-faced brat throws sticks or stones at the poor creature, for not being about its business of bridge-building across the Starry River. By evening time the magpies return to their usual places, for they are then supposed to have attended to their tasks and built the bridge.

To prove beyond a doubt that the bridge was made and walked over, you have only to look at the bare heads of the magpies at this time. Their feathers have been entirely worn off by the tramping of the crowd of retainers who follow the Prince of Star Land across the bridge to meet his bride. If it be wet weather on the morning of this day of the Weaver Maiden and the Cattle Prince, the rain-drops are the tears of joy shed by the lovers at their first meeting. If showers fall in the afternoon, they are the tears of sadness at saying farewell, when the prince and princess leave each other.
If any thunder is heard, every boy and girl knows that this comes from the rumble of the wagons which carry the baggage of the prince and princess, as they move away, each from the other, homeward. Now, this is the story which the Korean mothers tell to their children of the Bridge of Birds.

Long, long ago, in the Kingdom of the Stars,a king reigned who had a lovely daughter. Besides being the most beautiful to behold, she was a skillful weaver. There was no good thing to be done in the palace, but she could do it. She was not only highly accomplished, but of sweet temper and very willing. Being a model of all diligence, she was very greatly beloved of her parents and her influence over her father was very great. He would do almost anything to please his darling daughter. In due time a young and very handsome prince, who lived in Star Land, came to her father’s court and fell in love with the pretty princess. Her parents consenting, the wedding was celebrated with great splendor.

Now that she was a wife and had a home of her own to care for, she became all the more a model of lovely womanhood and an example to all the maidens of Korea forever. Besides showing diligence in the care of clothes and food and in setting her servants a good example of thrift, she thought much of their happiness. Her service to her husband was unremitting. Her chief ambition was to make his life one of constant joy. But the prince, instead of following his bride’s good example, and of appreciating what his beautiful and unselfish bride was doing for his happiness, gave himself up to waste and extravagance.

He became lazy and dissipated. Neglecting his duties, he wasted his own fortune and his wife’s dowry. He sold all his oxen and calves to get money only to lose it in gambling. He borrowed many and long ropes of coin from any one who would lend him the brass and iron money. Finally he was so scandalously poor, being on his last string of cash, that he was in danger of being degraded from his rank as prince, and of having his name spoken with contempt.

The King of the Stars, having seen his son-in-law on the downward way, had more than once threatened to disinherit, or banish him, especially after the prince had parted with his cattle. Yet when his daughter, the young wife, interceded and begged pardon for her husband, the king relented,
paid his son-in-law’s debts and gave him another chance to do better.

When, however, the worthless fellow fell back into his old ways, and grew
worse and worse, the king resolved to separate the pair, one from the other. He banished the prince, far, far away, six months’ distance from the north
side of the River of Heaven, and exiled the princess a half year’s measure of space from the south side of the Starry Stream.

Although the king in his wrath had hardened his heart, even against his own beloved child, and had driven her from court and palace, because of
her worthless husband, yet, as a signal proof of his compassion, he ordained that on one night of the year, on the seventh night of the seventh moon, they might meet for a few hours. 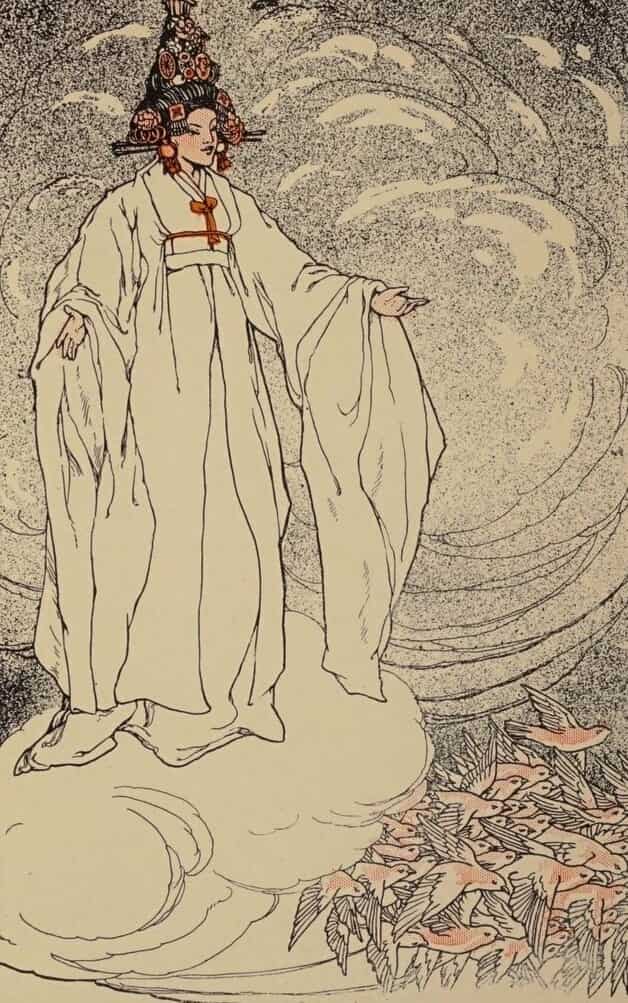 “The lovely lady that stands by the starry river to meet her lord.” Illustration by unknown artist, published in Korean Fairy Tales by William Eliot Griffis (1922), Thomas Y. Crowell and Company.

The young people parted and took their sad journey to the edge of the starry heavens, but they loved each other so dearly that, as soon as they arrived at their place of banishment, they turned round to meet each other on August 7th. So when the day came, after six months’ weary
journeying, they had reached the edge of the Starry River, and there they stood, catching glimpses and waving their hands, but unable to get
closer to each other. There one may see them on summer nights shining on opposite sides of the broad Stream of Stars, loving each other but unable to cross.

Feeling that the great gulf of space could not be spanned, the loving couple burst into tears. The flood from their eyes, making the river overflow, deluged the earth below, threatening to float everything, houses, people, animals away. What could be done? The four-footed creatures, fish and fowls, held a convention, but it was agreed that only those birds with strong wings and able to fly high could do anything. So the magpies, with many flattering speeches, were commended to the enterprise.

When these noisy and chattering creatures, that are nevertheless so kind and friendly to the sparrows, heard of the lovers’ troubles aloft, they resolved to help the sorrowing pair over the River of Stars. Out of their big, ugly nests they flew gladly to the convention that voted to build the bridge. Sending out word all over the world, millions of magpies assembled in the air. Under the direction of their wisest chiefs, they began their work of making, with a mass of wings, a flying bridge that would reach from shore to shore of the Starry Stream.

First, they put their heads together to furnish a floor, and, so closely, that the bridge looked as if it were paved with white granite. Then with their pinions they held up the great arch and highway, over which the prince crossed to his bride with all his baggage and train of followers. The tables were soon spread and the two royal lovers enjoyed a feast, with many tender words and caresses.

Every year, for ages past, on the seventh day of the seventh month, the magpies have done this. Indeed, although the star lovers meet only once a year, yet as they live on forever the wife has her husband and the husband his wife much longer than mortal couples who live on earth. It is law
in the magpie kingdom that no bird can shirk this work. Any magpie that tries to get out of the task and that is too bad or lazy to do its part in bridge
building, is chased away by the Korean children, who want no such truant around. For does not every girl hope to be as diligent and accomplished
as the Star Princess, so that when she grows up she may make as good a wife as the lovely lady that every year stands by the Starry River to
meet her lord? As for the boys, it is hoped that they will become as faithful husbands as the penitent bridegroom, who every year, on the night of August 7th, awaits his bride on the shining shore of the River of Stars.

The Seven Great Deeds of Ma-ui: How Ma-ui Fished Up the Great Island

The Seven Great Deeds of Ma-ui: How Ma-ui Fished Up the Great Island