Long, long ago, in the olden time, each of the islands of the Agean Sea formed a separate kingdom with a King of its own. Well, the King of Naxos had an only daughter, the like of whom for beauty was not to be found anywhere. All the other Kings wanted to marry her, and her father was much perplexed about it, for, as he said to himself, ‘ If I give her to the King of Paros, the Kings of Tinos, Ios, Mykonos and all the rest of them will make war on me.’

So he called his Twelve Counsellors and asked their advice. And the counsel of the Twelve was that the Princess should pretend to be dumb, and that the suitor who could make her speak after three days’ trial should marry her; but, if he failed, he should lose his head when the three days were expired.

Well, there went Kings and the sons of Kings,but none could make the Princess speak ; so every three days the King took one of their heads, which he put in three towers he had built for the purpose, until at last all the towers were full of heads.

Let us now leave these royal folk and come to the island of Syra where lived a poor old woman who had an orphan grandson, and had toiled and moiled and even begged so that she might bring him up decently. He was now grown a handsome youth ; and when he heard about the dumb Princess of Naxos, he said to the old woman, ‘Granny mine, I will go and make the Princess speak!’

My boy, my dear boy, knowest not that the sons of Kings and the sons of Princes have gone, and none of them all has been able to make her speak, so how shouldst thou, a poor ignorant lad? Wilt thou go and lose thy young life, who art my joy and the prop of my old age?’

But still the youth insisted upon going. And when the old woman saw that his mind was made up, and there was no turning him from his purpose, she said, ‘Well, then, go first and say good-bye to thy great-aunt, my sister, for she is a wise woman, and will doubtless advise thee well.’

So he goes to his great-aunt and says, ‘ Great- auntie, give me thy hand that I may kiss it, and say good-bye, for I am going to Naxos to try my luck with the Princess; and perhaps she will not speak and I shall lose my head.’

Then, like her sister, the old woman tried to dissuade him. But when she saw that her words had no weight with him, she went to the cupboard, took out a switch, and, putting it in his his hand, said, ‘Here, then, take this Magic Wand, and when thou hast propped it up, speak to it, and it will answer thee.’

Well, he took ship, and sailed away to Naxos ; and when he had landed and was come to the gate of the city where the King lived, he told the guards there that he had come to make the Princess speak. Said the officer to him, ‘ See’st thou those towers ? They are filled with the heads of Kings’ and Princes’ sons who have tried and failed. One head only is now lacking to complete the number.’ 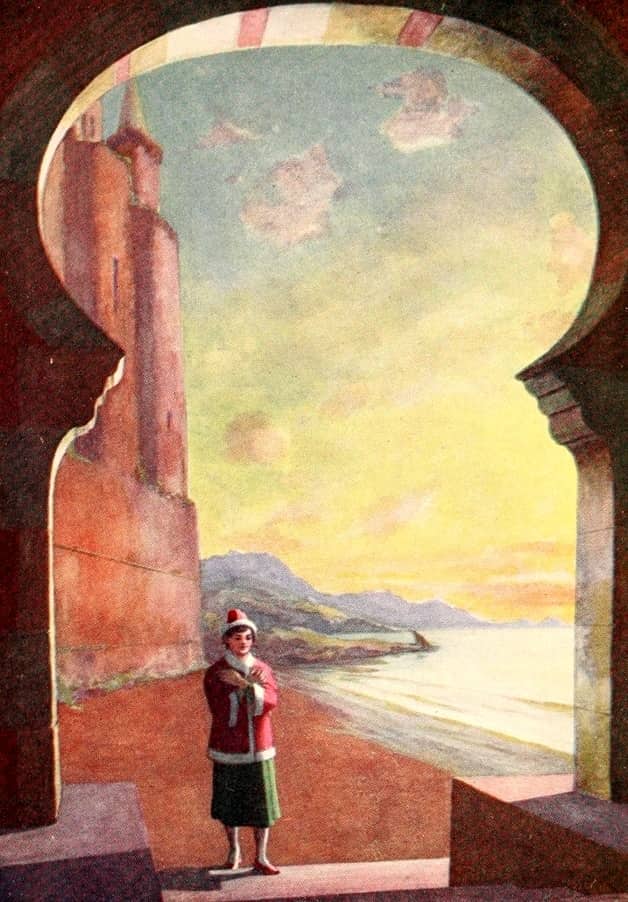 “At sunset he went to the palace.” Illustration by Edward A. Norbury, published in Greek Wonder Tales by Lucy M.J. Garnett (1913), A. and C. Black

‘Let mine be that head!’ cried the youth, nothing daunted; and so they gave him permission to try his luck. At sunset he entered the palace and was led to the Princess’s chamber, where the guards kept watch outside the door.

‘Good evening, my Princess,’ said our hero. But the lady did not even turn her head!

‘Ah, my Princess, do you not pity a poor fellow whose mother is a widow and whose only support he is, but still has abandoned her for your sake alone, and yet you will not even turn to look at him?’ And in such wise he talked until morning dawned, when the guards opened the doors, and he went away.

The next evening he goes again and says, ‘Good evening, beautiful Princess — At a deaf door, they say, it is useless to knock’ And then he began to sigh and to beseech her to have pity on him. But to no purpose.

The third evening he had gone to the Princess’s apartments quite in despair, when, all of a sudden, he recollected the advice of his great- aunt. Fortunately, he still held the Wand in his hand, and, going to the Door, he propped it up there, and said, ‘Hey, my good Door, the Princess won’t speak to me, so perhaps you will instead.’

Then the Wand spoke, and, pretending to be the Door, it said, ‘What can I tell you, dear boy? I was once a tree on the mountain, and they cut me down, and sawed me asunder into planks. They took me to a carpenter who planed me and made me into a door for the Princess’s chamber. Now, it is nothing but shut, open, all day long, and so they wear my life away! ‘

‘O Princess! ‘ cries the youth, * hear you not how even your Door speaks to me, yet you will not, and they will take my young life I ‘

Then he picks up the Wand, carries it to the great Candlestick, and props it up there, crying, ‘O golden Candlestick, the Princess will not speak to me, will not thou have pity on me?’

‘Ah, dear boy, what can I say — I who was but ore in the earth, and they smelted me and took me to the smith. Now, it is nothing but rub, nib, to make me shine, and so they wear my life away.’

The early dawn was now come, and the youth was getting rather frightened, for if the Princess had not spoken by sunrise off would go his head. So he went on tiptoe to the Princess as she sat on her cushions, and leaned the Wand against her without her being aware of anything. Then, stepping back, he addressed the Princess, saying,

‘O lady, thy Door and thy Candlestick speak to me, and yet thou art mute ‘

Then the Wand said, ‘Peace, peace, young man, I am sleepy.’

When the Princess heard this, she thought that it was she who had spoken, being drowsy and off her guard; but she cried angrily, ‘ I did not speak!’

‘Whether you spoke before or not, my Princess, at least you have spoken now,’ laughed the youth. ‘But,’ he continued, ‘ I will say to the King that you have not spoken, for as so many Princes have tried in vain and lost their heads unjustly, he may be angry and destroy us both.’

So when the day broke he left her; and as he went forth the guards questioned him, and he replied that the Princess had not spoken. So they laid hold of him and led him before the King, who sent for the Twelve. When they were all seated in the Council-chamber, the youth thus addressed them —-

‘My lord the King, and worshipful gentlemen! In my native place there happened a certain incident. A Priest, a Tailor, and a Carpenter set out on a journey in company. At sunset, just as darkness was overtaking them in the desert, they came to a half-ruined and uninhabited hut, and resolved to pass the night in it. But as there were neither bolts nor bars to the door, they agreed to keep watch and watch for four hours each. The first watch fell to the Carpenter, and in order to keep himself awake he carved the figure of a man from a stump of wood, set it up in front of the hut, and when his watch was over he woke up the Tailor and lay down in his place. After a little, the Tailor saw the figure and guessed that the Carpenter had wished to play off a joke on him. So, to keep himself awake, he opened his bag and dressed up the figure in breeches and jacket, put a cap on his head, and when he had watched four hours he called the Priest and lay down. The good Papas to keep himself awake, lighted a candle, and began to pace up and down reading his prayer-book. Presently, as he passed the doorway, he chanced to look up and saw the figure. At first he was terribly frightened, but on going up to it he saw that, though it looked so life-like, it was no living man. Then he fell on his knees and prayed fervently to the Maker of all things to give it life. And God commanded the image to speak, and it became human; and when the three set off again on their journey, it walked with them to the town. Arrived there, they went before the judge, because they had already begun to dispute as to which of them the newly made man belonged. For the Carpenter claimed him because he had fashioned him out of wood, the Tailor because he had dressed him, and the Priest because he had made him speak. I, however, came away without hearing the judge’s decision. So I pray you to tell me to whom should he belong — to the Carpenter who fashioned him, the Tailor who clothed him, or the Priest who made him speak ? ‘

Then the Twelve with the King decided that the Carpenter ought to be paid for his labour, and the Tailor for the clothes, but that the Priest must have the man. When they had thus pronounced, the youth said, ‘Then, my lord the King and your Excellencies, the Princess belongs to me. It is I who have made her speak! Ask her if it is not true.’

The Princess was then sent for to the Council- chamber where she acknowledged before the assembly that she had indeed spoken to the youth. So there was an end to the Kind’s decree; and the wedding was held, and there were feastings and carousals and great rejoicings. The youth sent for his old grandmother from Syra; and she lived in the palace, and in place of the boiled beans she had formerly eaten, she now ate partridges.

The Daughter of the Sword

The Daughter of the Sword