Once upon a time the Indians were having a big dance because they had gathered much corn and many squashes and other things to eat; for the Rain-God had been very kind and sent many showers to make things grow. They were singing and making music with the dried shoulder blades of sheep. 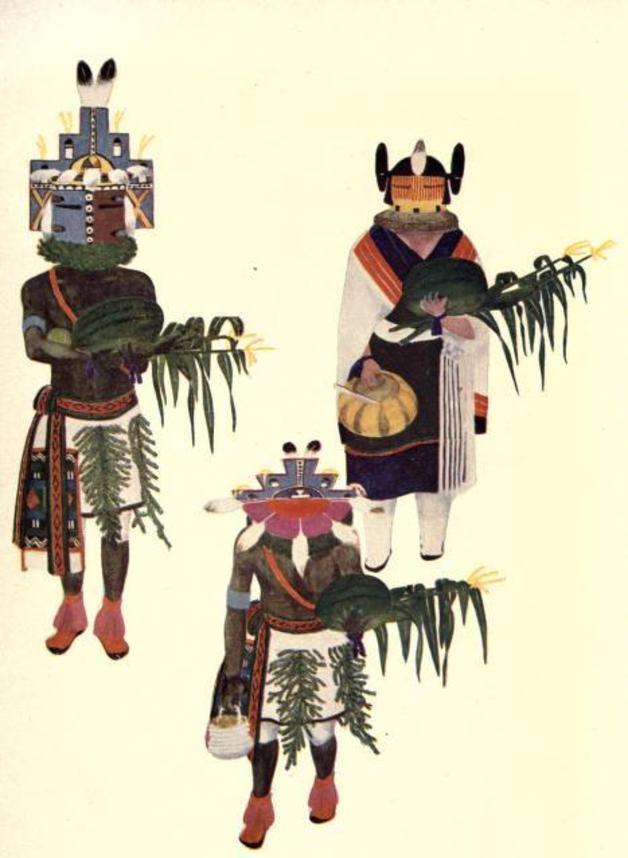 “The Indians were having a big Kachina dance.” Illustration by Fred Kabotie, published in Taytay’s Tales by Elizabeth Willis DeHuff (1922), Harcourt, Brace and Company.

A fox on top of the high mesa beside the valley saw them dancing. He howled and howled in all directions. Blue foxes ran to him from the east; yellow foxes came from the west; gray foxes from the north; and black foxes from the south.

“Brothers,” said the first fox to them, “the Indians have much corn and many good things to eat. They are busy singing and dancing and will not see us. Let us go down and help ourselves to the good things.”

“How can we get down the cliff?” asked one fox.

“We will make a chain,” replied the first fox, “by biting each others’ tails; and then we can climb down the cliff. But not a fox must open his mouth or the chain will be broken and we shall all fall.”

But an ant stung one of the foxes near the top and he forgot his orders, opened his mouth to snap the ant, and let the tail he held slip out from between his teeth. Down fell all of the foxes; down the steep cliff onto the rocks below, and every one of them was killed.