Fairytalez.com » Aesop's Fables » The Town Mouse and the Country Mouse

Now you must know that a Town Mouse once upon a time went on a visit to his cousin in the country. He was rough and ready, this cousin, but he loved his town friend and made him heartily welcome. Beans and bacon, cheese and bread, were all he had to offer, but he offered them freely. The Town Mouse rather turned up his long nose at this country fare, and said: “I cannot understand, Cousin, how you can put up with such poor food as this, but of course you cannot expect anything better in the country; come you with me and I will show you how to live. When you have been in town a week you will wonder how you could ever have stood a country life.”

No sooner said than done: the two mice set off for the town and arrived at the Town Mouse’s residence late at night. “You will want some refreshment after our long journey,” said the polite Town Mouse, and took his friend into the grand dining-room. There they found the remains of a fine feast, and soon the two mice were eating up jellies and cakes and all that was nice. 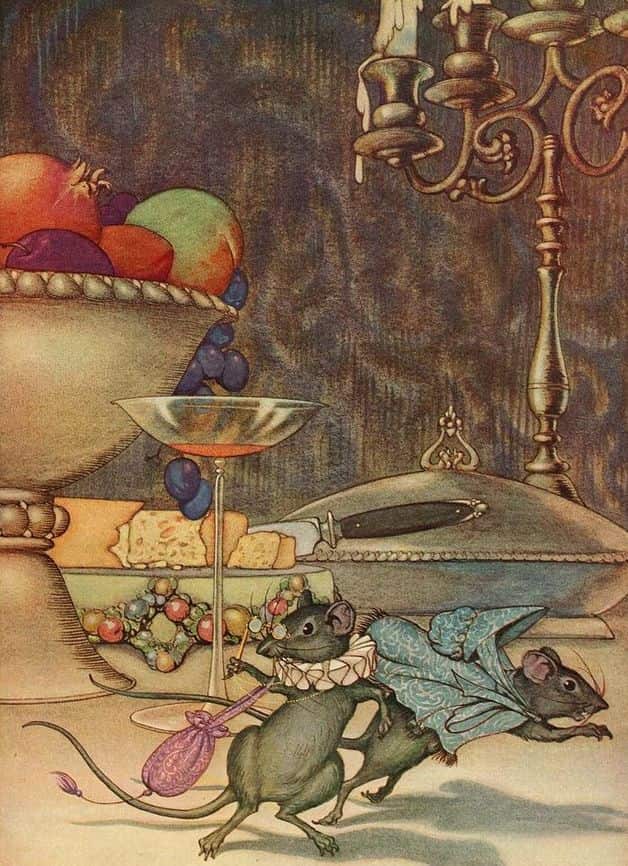 “The town mouse and the country mouse.” Illustration by Milo Winter. Published in The Aesop for Children with Pictures by Milo Winter (1919), Rand McNally

Suddenly they heard growling and barking. “What is that?” said the Country Mouse. “It is only the dogs of the house,” answered the other.

“Only!” said the Country Mouse. “I do not like that music at my dinner.”

Just at that moment the door flew open, in came two huge mastiffs, and the two mice had to scamper down and run off. “Good-bye, Cousin,” said the Country Mouse.

“What! going so soon?” said the other.

“Yes,” he replied; “Better beans and bacon in peace than cakes and ale in fear.”

The Man and the Serpent

Prev Story The Fox and the Crow
Next Story

The Man and the Serpent