Muskrat and his grandmother were gathering wood for the camp the next morning, when they came to an old buffalo skull. The plains were dotted with these relics of the chase, for already the hide-hunting white man had played havoc with the great herds of buffalo. This skull was in a grove of cottonwood-trees near the river, and as they approached two Mice scampered into it to hide. Muskrat, in great glee, secured a stick and was about to turn the skull over and kill the Mice, when his grandmother said: “No, our people never kill Mice. Your grandfather will tell you why if you ask him. The Mice-people are our friends and we treat them as such. Even small people can be good friends, you know—remember that.”

All the day the boy wondered why the Mice-people should not be harmed; and just at dark he came for me to accompany him to War Eagle’s lodge. On the way he told me what his grandmother had said, and that he intended to ask for the reason, as soon as we arrived. We found the other children already there, and almost before we had seated ourselves, Muskrat asked:

“Grandfather, why must we never kill the Mice-people? Grandmother said that you knew.”

“Yes,” replied War Eagle, “I do know and you must know. Therefore I shall tell you all to-night why the Mice-people must be let alone and allowed to do as they please, for we owe them much; much more than we can ever pay. Yes—they are great people, as you will see.

“It happened long, long ago, when there were few men and women on the world. OLD-man was chief of all then, and the animal-people and the bird-people were greater than our people, because we had not been on earth long and were not wise.

“There was much quarrelling among the animals and the birds. You see the Bear wanted to be chief, under OLD-man, and so did the Beaver. Almost every night they would have a council and quarrel over it. Beside the Bear and Beaver, there were other animals, and also birds, that thought they had the right to be chief. They couldn’t agree and the quarrelling grew worse as time went on. Some said the greatest thief should be chosen. Others thought the wisest one should be the leader; while some said the swiftest traveller was the one they wanted. So it went on and on until they were most all enemies instead of friends, and you could hear them quarrelling almost every night, until OLD-man came along that way.

“He heard about the trouble. I forget who told him, but I think it was the Rabbit. Anyhow he visited the council where the quarrelling was going on and listened to what each one had to say. It took until almost daylight, too. He listened to it all—every bit. When they had finished talking and the quarrelling commenced as usual, he said, ‘stop!’ and they did stop.

“Then he said to them: ‘I will settle this thing right here and right now, so that there will be no more rows over it, forever.’

“He opened his paint sack and took from it a small, polished bone. This he held up in the firelight, so that they might all see it, and he said:

“‘This will settle the quarrel. You all see this bone in my right hand, don’t you?’

“‘Well, now you watch the bone and my hands, too, for they are quick and cunning.’

“OLD-man began to sing the gambling song and to slip the bone from one hand to the other so rapidly and smoothly that they were all puzzled. Finally he stopped singing and held out his hands—both shut tight, and both with their backs up.

“‘Which of my hands holds the bone now?’ he asked them.

“Some said it was in the right hand and others claimed that it was the left hand that held it. OLD-man asked the Bear to name the hand that held the bone, and the Bear did; but when OLD-man opened that hand it was empty—the bone was not there. Then everybody laughed at the Bear. OLD-man smiled a little and began to sing and again pass the bone.

“‘Beaver, you are smart; name the hand that holds the bone this time.’

“The Beaver said: ‘It’s in your right hand. I saw you put it there.’

“OLD-man opened that hand right before the Beaver’s eyes, but the bone wasn’t there, and again everybody laughed—especially the Bear.

“‘Now, you see,’ said OLD-man, ‘that this is not so easy as it looks, but I am going to teach you all to play the game; and when you have all learned it, you must play it until you find out who is the cleverest at the playing. Whoever that is, he shall be chief under me, forever.’

“Some were awkward and said they didn’t care much who was chief, but most all of them learned to play pretty well. First the Bear and the Beaver tried it, but the Beaver beat the Bear easily and held the bone for ever so long. Finally the Buffalo beat the Beaver and started to play with the Mouse. Of course the Mouse had small hands and was quicker than the Buffalo—quicker to see the bone. The Buffalo tried hard for he didn’t want the Mouse to be chief but it didn’t do him any good; for the Mouse won in the end.

“It was a fair game and the Mouse was chief under the agreement. He looked quite small among the rest but he walked right out to the centre of the council and said:

“‘Listen, brothers—what is mine to keep is mine to give away. I am too small to be your chief and I know it. I am not warlike. I want to live in peace with my wife and family. I know nothing of war. I get my living easily. I don’t like to have enemies. I am going to give my right to be chief to the man that OLD-man has made like himself.’

“That settled it. That made the man chief forever, and that is why he is greater than the animals and the birds. That is why we never kill the Mice-people. 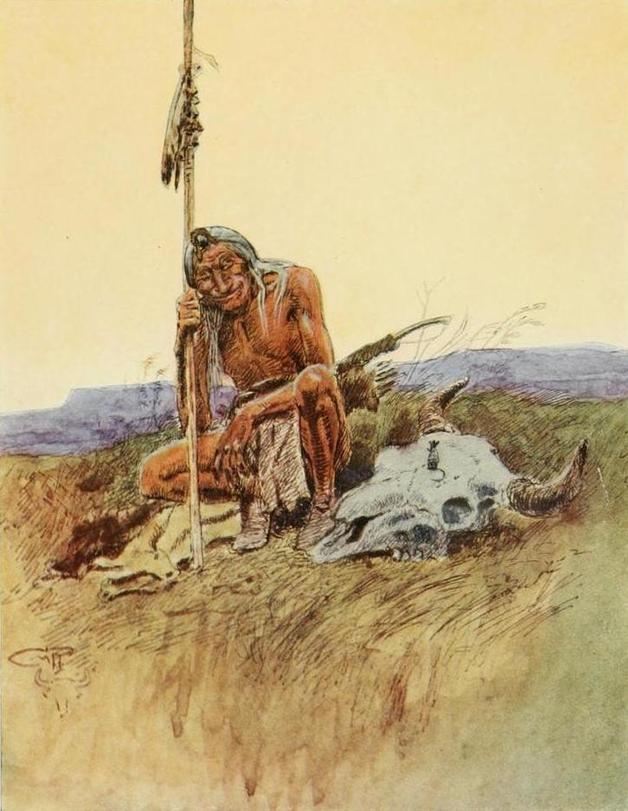 “Yes — the Mice-people always make their nests in the heads of the dead Buffalo-people, every since that night.” Illustration by Charles M. Russell, published in Indian Why Stories: Sparks from War Eagle’s Lodge Fire by Frank B. Linderman (1915), Charles Scribner’s Sons.

“You saw the Mice run into the buffalo skull, of course. There is where they have lived and brought up their families ever since the night the Mouse beat the Buffalo playing the bone game. Yes—the Mice-people always make their nests in the heads of the dead Buffalo-people, ever since that night.

“Our people play the same game, even today. See,” and War Eagle took from his paint sack a small, polished bone. Then he sang just as OLD-man did so long ago. He let the children try to guess the hand that held the bone, as the animal-people did that fateful night; but, like the animals, they always guessed wrong. Laughingly War Eagle said:

“Now go to your beds and come to see me to-morrow night. Ho!”