Fairytalez.com » Blog » Hans Christian Andersen and Three of His Fairy Tales You May Not Know

Hans Christian Andersen was born on April 2, 1805 in Odense, Denmark, and each year, literature enthusiasts celebrate his birthday. Andersen’s more than 160 fairy tales gave the world so many memorable characters and stories, several of which would go on to be retold in movies, television, and books. From The Little Mermaid to the Steadfast Tin Soldier, Hans Christian Andersen stories have stood the test of time. Hans Christian Andersen was born on April 2, 1805 in Odense, Denmark, and each year, literature enthusiasts celebrate his birthday. Andersen’s more than 160 fairy tales gave the world so many memorable characters and stories, several of which would go on to be retold in movies, television, and books. From The Little Mermaid to the Steadfast Tin Soldier, Hans Christian Andersen stories have stood the test of time.

Hans Christian Andersen was born to poor parents as the son of a washer woman and a shoemaker. His meager beginnings didn’t deter him, however, and he found happiness in stories he was told. These stories include selections of A 1001 Nights, and the people of Odense were bewildered by this boy who refused to learn a trade like his parents. He was driven with a need to become a star, and relocated to Copenhagen, in hopes of performing at the Royal Theater. He was an unsuccessful actor, despite patrons’ help, but he did show a talent in writing. He went to school with his education funded by one of the directors, but was unhappy. He was tall and gangly, older than the other students, and many there thought poorly of him. He was then removed and given a private tutor, and he went on to graduate from Copenhagen University. He wrote throughout his entire education, creating stories, plays and more, finally publishing Fairy Tales Told for Children in 1835. There were two collections of Hans Christian Andersen’s fairy tales, and both were very successful. While you may know of his more famous fairy tales, such as The Emperor’s New Clothing, and The Snow Queen, there’s a wealth of stories for children and adults that need to be appreciated. Here are five lesser-known Hans Christian Andersen stories. 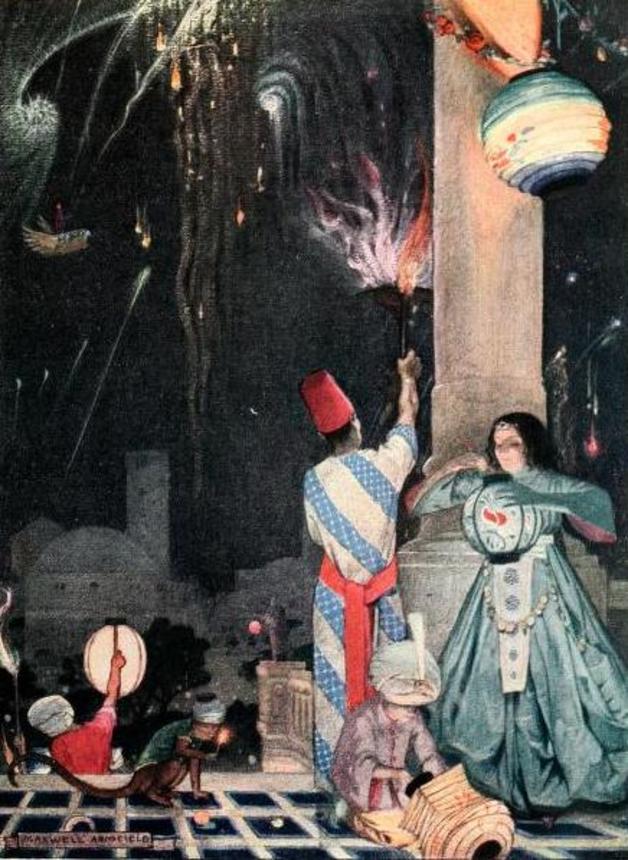 “The merchant’s son tells the story of the matches.” Illustration by Maxwell Armfield. Published in Faery Tales from Hans Christian Andersen, 1910. J.M. Dent and Co.

This story concerns a trunk with the power to fly, and the young man who rides it. He’s taken by the trunk to Turkey, where he meets the Sultan’s daughter. You may see a correlation between this and a flying carpet like in A 1001 Nights; Andersen’s father often read to him from the story collection when he was a boy.

What the Moon Saw

What the Moon is a lovely story that details the various things the moon sees during its time in the night. It’s also a great example of the personification that Hans Christian Andersen does so well, where he gives inanimate objects the emotions and personality of humans. You can read this story for children and adults in 1 hour, at the Intermediate level.

Read What the Moon Saw

Some may know the story of Tom Thumb, but what of Thumbelina? This charming story is about a girl who is saw small that she sleeps in a walnut shell. Thumbelina has all of the great elements of a fairy tale, including fairies, magic, and whimsy, plus a good dose of adventure. It’s a 25 minute read at the Intermediate level.

We hope you enjoy these great and lively fairy tales from a beloved master. You’ll find even more of Hans Christian Andersen’s stories at Fairytalez.com and in audiobook form in the Fairytalez Audio App.