Pourquoi tales are stories that explain how or why something came to be as it is today. You can find pourquoi stories from around the world as they have been passed down from generation to generation. Originating from areas like Nigeria, Brazil, and Africa, these stories are timeless tales for any age. 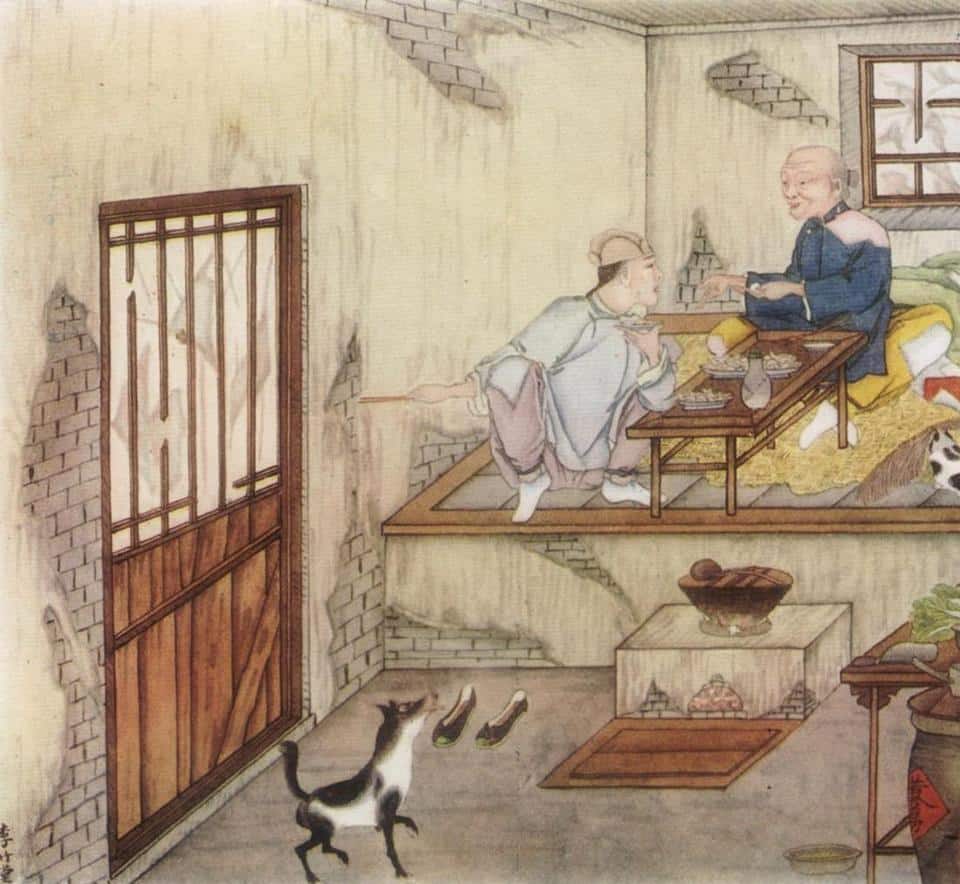 "'Here son!' she cried. 'Have a look at my treasure!' Illustration by Li Chu-T'ang, published in A Chinese Wonder Book by Norman Hinsdale Pittman (1919), E.P. Dutton & Co.

Children often enjoy asking a simple question: “Why?” They may want to know why the sky is blue or why fish live in the sea. Did you know that these types of questions can be answered with a pourquoi tale? This is just one of the many folktales you’ll find here at Fairytalez.com. Let’s break down what pourquoi tales and identify a few you can read now.

The water very soon overflowed the top of the roof, and the sun and moon were forced to go up into the sky, where they have remained ever since.

Pourquoi (pronounced por-kwa) is French for “why” and among the stories from around the world are pourquoi tales. Stories are wonderful tools to engage our curiousity. They can thrill us or take us on an enchanting world unlike anything we’ve ever seen. Other stories give us an explanation about something in nature, such as Why the Moon Waxes and Wanes. Like other fairy tales, folktales, and fables, many of these stories have been passed down from generation to generation throughout various cultures.

Pourquoi tales come from a variety of regions such as Australia and South Africa. Both cultures have tales that focused on the appearance and behaviors of animals in stories like Why the Heron has a Crooked Neck. While South African pourquoi tales focus on the appearances and behaviors of animals, Australian pourquoi tales are often connected to the Dreamtime, a term used for the Aboriginal interpretation of the world, how it was created, and the stories behind it. K. Langloh Parker shared her own versions of the Dreamtime myths, collecting stories from the Indigenous Australian people known as the Ualarai in New South Wales. Parker would write “I have confined this little book to the legends of the Narran tribe, known among themselves as Noongahburrahs.”

Unlike Parker’s tales, the Just So Stories by Rudyard Kipling are original stories that weren’t collected from a culture. The author made them up as  bedtime tales for his eldest daughter who demanded they be told “just so.” This collection featured several stories that explain how an animal acquired a feature of its appearance. Walt Disney Productions enjoyed the Just So Stories so much that they produced several vinyl editions of the story, both in a read-a-long book set and as a single LP record. In 1992, a British studio produced Rudyard Kipling’s Just So Stories, an animated series with 12 of the classic tales. The tales continue to appear in children’s schoolbooks and reproduced with beautiful illustrations as gift books.

The depth of pourquoi tales is why they’re so fun and entertaining to read at any age.

How to Identify a Pourquoi Tale

There are several elements to a pourquoi tale. As you read these how and why stories, you’ll probably notice a pattern among the various folktales.

Although it doesn’t say “How” or “Why” in the title, The Elephant’s Child is very much a pourquoi tale as it explains how the elephant got such a long trunk. The elephant’s child tends to ask a lot of questions and has a too-close encounter with a crocodile. He ends up in a scary situation and has to be rescued by the Bi-Coloured-Python-Rock-Snake. This leads to a much different appearance. Rudyard Kipling shared this story in Just So Stores and it’s an Intermediate 14-minute read.

How the Toad Got His Bruises

How the Toad Got His Bruises is a quick 5-minute read by Elsie Spicer Eells. Long ago, the toad had smooth skin without bumps. He also loved to travel across long distances. One day, his travels get him into a painful situation. Discover what and how it lead to his distinctive spots in this Brazilian pourquoi folktale.

Read How the Toad Got His Bruises

The Golden Beetle, or Why the Dog Hates the Cat

Blackfoot, the dog, and Whitehead, the cat, live in a house together in the Chinese folktale The Golden Beetle, or Why the Dog Hates the Cat. They soon learn that a golden beetle is the cause of their owner’s good fortune, and how it affects them when the beetle disappears. They set out to return the beetle to their household, but end up becoming enemies on the way. The Golden Beetle is an Intermediate 25-minute read from The Chinese Wonder Book by Norman Hinsdale Pitman.

Read The Golden Beetle, or Why the Dog Hates the Cat

Why the Sun and the Moon Live in the Sky

The sun and moon are curious as to why the water never returns their visits, and requests the water visit them. The moon agrees under a certain condition: they must build a large compound. When the water arrives, they’re eager to see him. Author Elphinstone Darrell features this pourquoi story and several others in his collection Folk Stories from Southern Nigeria. Although at the Advanced reading level, it’s a short 2-minute read.

Read Why the Sun and the Moon Live in the Sky

How The Camel Got His Hump

The Just So Stories collection from Rudyard Kipling is a great collection of pourquoi tales like How the Camel Got His Hump. The camel is a lazy animal who doesn’t want to work and simply refuses to speak to anyone in this 5-minute read. A djinn discovers the camel’s lazy tendencies and punishes him by turning his “constant remark of “Humph!” into an actual hump.

Read How the Camel Got His Hump

For even more porquoi tales, take a look at our Best New Phenomenon Fairy Tale writing competition. Our users have authored several “how” and “why” stories. You can also find great porquoi audiobooks in the Fairytalez Audio App.

One Response to Tell Me Why: Exploring Pourquoi Tales