Fairytalez.com » Joseph Jacobs » The Demon with the Matted Hair

This story the Teacher told in Jetavana about a Brother who had ceased striving after righteousness. Said the Teacher to him: “Is it really true that you have ceased all striving?”—”Yes, Blessed One,” he replied. Then the Teacher said: “O Brother, in former days wise men made effort in the place where effort should be made, and so attained unto royal power.” And he told a story of long ago.

Once upon a time, when Brahmadatta was King of Benares, the Bodhisatta was born as son of his chief queen. On his name-day they asked 800 Brahmans, having satisfied them with all their desires, about his lucky marks. The Brahmans who had skill in divining from such marks beheld the excellence of his, and made answer:

“Full of goodness, great King, is your son, and when you die he will become king; he shall be famous and renowned for his skill with the five weapons, and shall be the chief man in all India.” On hearing what the Brahmans had to say, they gave him the name of the Prince of the Five Weapons, sword, spear, bow, battle-axe, and shield.

When he came to years of discretion, and had attained the measure of sixteen years, the King said to him:

“My son, go and complete your education.”

“Who shall be my teacher?” the lad asked.

“Go, my son; in the kingdom of Candahar, in the city of Takkasila, is a far-famed teacher from whom I wish you to learn. Take this, and give it him for a fee.” With that he gave him a thousand pieces of money, and dismissed him.

The lad departed, and was educated by this teacher; he received the Five Weapons from him as a gift, bade him farewell, and leaving Takkasila, he began his journey to Benares, armed with the Five Weapons.On his way he came to a forest inhabited by the Demon with the Matted Hair. At the entering in of the forest some men saw him, and cried out:

“Hullo, young sir, keep clear of that wood! There’s a Demon in it called he of the Matted Hair: he kills every man he sees!”

And they tried to stop him. But the Bodhisatta, having confidence in himself, went straight on, fearless as a maned lion. 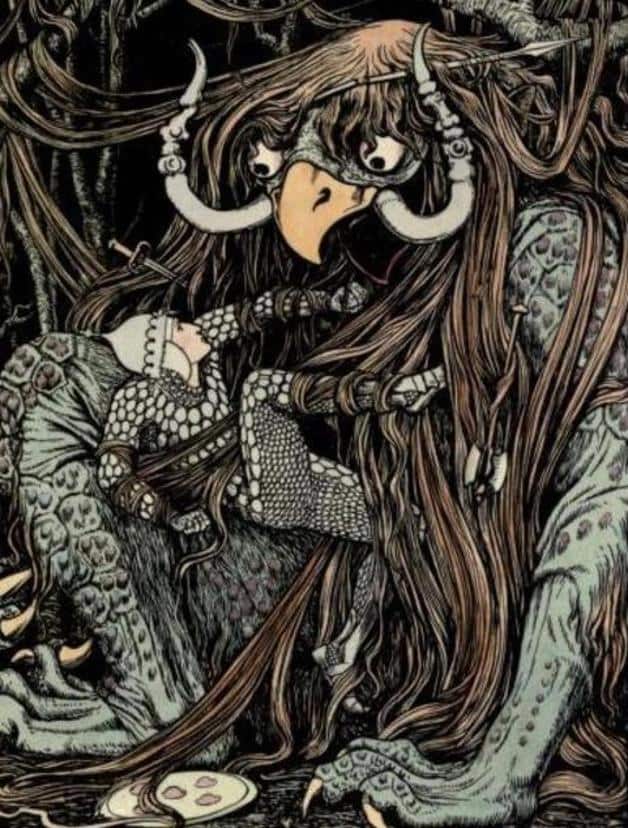 “The demon with the matted hair.” Illustration by John Batten, published in Indian Fairy Tales by Joseph Jacobs (1892), David Nutt.

When he reached mid-forest the Demon showed himself. He made himself as tall as a palm tree; his head was the size of a pagoda, his eyes as big as saucers, and he had two tusks all over knobs and bulbs; he had the face of a hawk, a variegated belly, and blue hands and feet.

Said the Bodhisatta: “Demon, I came here trusting in myself. I advise you to be careful how you come near me. Here’s a poisoned arrow, which I’ll shoot at you and knock you down!” With this menace, he fitted to his bow an arrow dipped in deadly poison, and let fly. The arrow stuck fast in the Demon’s hair. Then he shot and shot, till he had shot away fifty arrows; and they all stuck in the Demon’s hair. The Demon snapped them all off short, and threw them down at his feet; then came up to the Bodhisatta, who drew his sword and struck the Demon, threatening him the while. His sword—it was three-and-thirty inches long—stuck in the Demon’s hair! The Bodhisatta struck him with his spear—that stuck too! He struck him with his club—and that stuck too!

When the Bodhisatta saw that this had stuck fast, he addressed the Demon. “You, Demon!” said he, “did you never hear of me before—the Prince of the Five Weapons? When I came into the forest which you live in I did not trust to my bow and other weapons. This day will I pound you and grind you to powder!” Thus did he declare his resolve, and with a shout he hit at the Demon with his right hand. It stuck fast in his hair! He hit him with his left hand—that stuck too! With his right foot he kicked him—that stuck too; then with his left—and that stuck too! Then he butted at him with his head, crying, “I’ll pound you to powder!” and his head stuck fast like the rest.

Thus the Bodhisatta was five times snared, caught fast in five places, hanging suspended: yet he felt no fear—was not even nervous.

Thought the Demon to himself: “Here’s a lion of a man! A noble man! More than man is he! Here he is, caught by a Demon like me; yet he will not fear a bit. Since I have ravaged this road, I never saw such a man. Now, why is it that he does not fear?” He was powerless to eat the man, but asked him: “Why is it, young sir, that you are not frightened to death?”

“Why should I fear, Demon?” replied he. “In one life a man can die but once. Besides, in my belly is a thunderbolt; if you eat me, you will never be able to digest it; this will tear your inwards into little bits, and kill you: so we shall both perish. That is why I fear nothing.” (By this, the Bodhisatta meant the weapon of knowledge which he had within him.)

When he heard this, the Demon thought: “This young man speaks the truth. A piece of the flesh of such a lion-man as he would be too much for me to digest, if it were no bigger than a kidney-bean. I’ll let him go!” So, being frightened to death, he let go the Bodhisatta, saying “Young sir, you are a lion of a man! I will not eat you up. I set you free from my hands, as the moon is disgorged from the jaws of Rahu after the eclipse. Go back to the company of your friends and relations!”

And the Bodhisatta said: “Demon, I will go, as you say. You were born a Demon, cruel, blood-bibbing, devourer of the flesh and gore of others, because you did wickedly in former lives. If you still go on doing wickedly, you will go from darkness to darkness. But now that you have seen me you will find it impossible to do wickedly. Taking the life of living creatures causes birth, as an animal, in the world of Petas, or in the body of an Asura, or, if one is reborn as a man, it makes his life short.” With this and the like monition he told him the disadvantage of the five kinds of wickedness, and the profit of the five kinds of virtue, and frightened the Demon in various ways, discoursing to him until he subdued him and made him self-denying, and established him in the five kinds of virtue; he made him worship the deity to whom offerings were made in that wood; and having carefully admonished him, departed out of it.

At the entrance of the forest he told all to the people thereabout; and went on to Benares, armed with his five weapons. Afterwards he became king, and ruled righteously; and after giving alms and doing good he passed away according to his deeds.

_And the Teacher, when this tale was ended, became perfectly enlightened, and repeated this verse:

Whose mind and heart from all desire is free,
Who seeks for peace by living virtuously,
He in due time will sever all the bonds
That bind him fast to life, and cease to be.

Thus the Teacher reached the summit, through sainthood and the teaching of the law, and thereupon he declared the Four Truths. At the end of the declaring of the Truths, this Brother also attained to sainthood. Then the Teacher made the connexion, and gave the key to the birth- tale, saying: “At that time Angulimala was the Demon, but the Prance of the Five Weapons was I myself.”

Why the Fish Laughed

Prev Story The Ivory City and Its Fairy Princess
Next Story

Why the Fish Laughed