In a certain forest there once lived a fox, and near to the fox lived a man who had a cat that had been a good mouser in its youth, but was now old and half blind. The man didn’t want puss any longer, but not liking to kill it, took it out into the forest and lost it there. Then the fox came up and said, “Why, Mr Shaggy Matthew! How d’ye do! What brings you here?”––“Alas!” said Pussy, “my master loved me as long as I could bite, but now that I can bite no longer and have left off catching mice––and I used to catch them finely once––he doesn’t like to kill me, but he has left me in the wood where I must perish miserably.”––“No, dear Pussy!” said the fox; “you leave it to me, and I’ll help you to get your daily bread.”––“You are very good, dear little sister foxey!” said the cat, and the fox built him a little shed with a garden round it to walk about in. 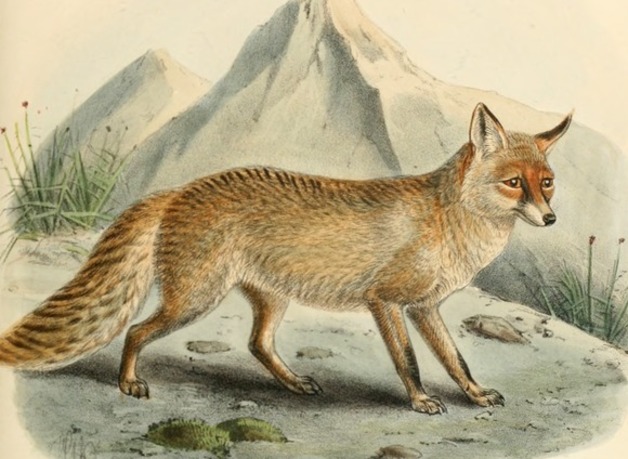 “In a certain forest there once lived a fox.” Illustration by unknown artist, used under Creative Commons via Wikimedia.

Now one day the hare came to steal the man’s cabbage. “Kreem-kreem-kreem!” he squeaked. But the cat popped his head out of the window, and when he saw the hare, he put up his back and stuck up his tail and said, “Ft-t-t-t-t-Frrrrrrr!” The hare was frightened and ran away and told the bear, the wolf, and the wild boar all about it. “Never mind,” said the bear, “I tell you what, we’ll all four give a banquet, and invite the fox and the cat, and do for the pair of them. Now, look here! I’ll steal the man’s mead; and you, Mr Wolf, steal his fat-pot; and you, Mr Wildboar, root up his fruit-trees; and you, Mr Bunny, go and invite the fox and the cat to dinner.”

So they made everything ready as the bear had said, and the hare ran off to invite the guests. He came beneath the window and said, “We invite your little ladyship Foxey-Woxey, together with Mr Shaggy Matthew, to dinner”––and back he ran again.––“But you should have told them to bring their spoons with them,” said the bear.––“Oh, what a head I’ve got! if I didn’t quite forget!” cried the hare, and back he went again, ran beneath the window and cried, “Mind you bring your spoons!”––“Very well,” said the fox.

So the cat and the fox went to the banquet, and when the cat saw the bacon, he put up his back and stuck out his tail, and cried, “Mee-oo, mee-oo!” with all his might. But they thought he said, “Ma-lo, ma-lo!”––“What!” said the bear, who was hiding behind the beeches with the other beasts, “here have we four been getting together all we could, and this pig-faced cat calls it too little! What a monstrous cat he must be to have such an appetite!” So they were all four very frightened, and the bear ran up a tree, and the others hid where they could. But when the cat saw the boar’s bristles sticking out from behind the bushes he thought it was a mouse, and put up his back again and cried, “Ft! ft! ft! Frrrrrrr!” Then they were more frightened than ever. And the boar went into a bush still farther off, and the wolf went behind an oak, and the bear got down from the tree, and climbed up into a bigger one, and the hare ran right away.

But the cat remained in the midst of all the good things and ate away at the bacon, and the little fox gobbled up the honey, and they ate and ate till they couldn’t eat any more, and then they both went home licking their paws.