Fairytalez.com » Zanzibar Tales » The Lion, the Hyena, and the Rabbit

Once upon a time Sim′ba, the lion, Fee′see, the hyena, and Keetee′tee, the rabbit, made up their minds to go in for a little farming. So they went into the country, made a garden, planted all kinds of seeds, and then came home and rested quite a while.

Then, when the time came when their crops should be about ripe and ready for harvesting, they began to say to each other, “Let’s go over to the farm, and see how our crops are coming along.”

So one morning, early, they started, and, as the garden was a long way off, Keeteetee, the rabbit, made this proposition: “While we are going to the farm, let us not stop on the road; and if any one does stop, let him be eaten.” His companions, not being so cunning as he, and knowing they could outwalk him, readily consented to this arrangement. 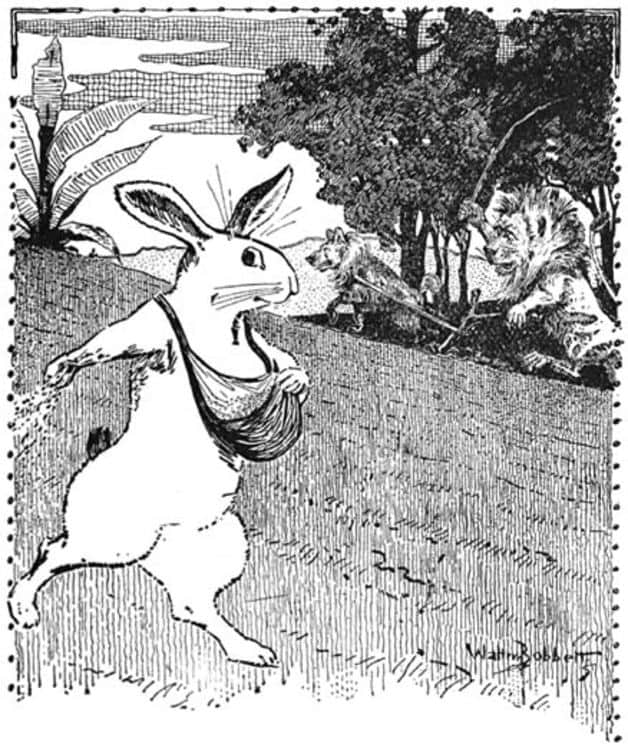 “The lion, the hyena and the rabbit go in for a little farming.” Illustration by Walter Bobbett, published in Zanzibar Tales: Told by Natives of the East Coast of Africa by George Batema (1901), A.C. McClurg and Co.

Well, off they went; but they had not gone very far when the rabbit stopped.

“Hullo!” said Feesee, the hyena; “Keeteetee has stopped. He must be eaten.”

“Well,” said the rabbit, “I happened to be thinking.”

“What about?” cried his partners, with great curiosity.

“I’m thinking,” said he, with a grave, philosophical air, “about those two stones, one big and one little; the little one does not go up, nor does the big one go down.”

The lion and the hyena, having stopped to look at the stones, could only say, “Why, really, it’s singular; but it’s just as you say;” and they all resumed their journey, the rabbit being by this time well rested.

When they had gone some distance the rabbit stopped again.

“Aha!” said Feesee; “Keeteetee has stopped again. Now he must be eaten.”

“I rather think so,” assented Simba.

“Well,” said the rabbit, “I was thinking again.”

Their curiosity once more aroused, his comrades begged him to tell them his think.

“Why,” said he, “I was thinking this: When people like us put on new coats, where do the old ones go to?”

Both Simba and Feesee, having stopped a moment to consider the matter, exclaimed together, “Well, I wonder!” and the three went on, the rabbit having again had a good rest.

After a little while the hyena, thinking it about time to show off a little of his philosophy, suddenly stopped.

“What are you thinking about?” they inquired.

“I’m thinking about nothing at all,” said he, imagining himself very smart and witty.

“Ah, pshaw!” cried Keeteetee; “we won’t be fooled that way.”

So he and Simba ate the hyena.

When they had finished eating their friend, the lion and the rabbit proceeded on their way, and presently came to a place where there was a cave, and here the rabbit stopped.

“H’m!” ejaculated Simba; “I’m not so hungry as I was this morning, but I guess I’ll have to find room for you, little Keeteetee.”

Said the rabbit: “I’m thinking about that cave. In olden times our ancestors used to go in here, and go out there, and I think I’ll try and follow in their footsteps.”

So he went in at one end and out at the other end several times.

Then he said to the lion, “Simba, old fellow, let’s see you try to do that;” and the lion went into the cave, but he stuck fast, and could neither go forward nor back out.

In a moment Keeteetee was on Simba’s back, and began eating him.

After a little time the lion cried, “Oh, brother, be impartial; come and eat some of the front part of me.”

But the rabbit replied, “Indeed, I can’t come around in front; I’m ashamed to look you in the face.”

So, having eaten all he was able to, he left the lion there, and went and became sole owner of the farm and its crops.

The Hare and the Lion

Prev Story The Kites and the Crows
Next Story

The Hare and the Lion