It was proclaimed throughout the kingdom of Granada that the king had decided on marrying. The news was first told to the court barber, then to the night watchmen, and, in the third place, to the oldest woman in the city of Granada.

The barber told all his customers, who again told all their friends. The night watchmen in crying the hour proclaimed the news in a loud voice, so that all the maidens were kept awake by thinking of the news, and by day they were being constantly reminded by all the old dueñas that the king had resolved to marry. 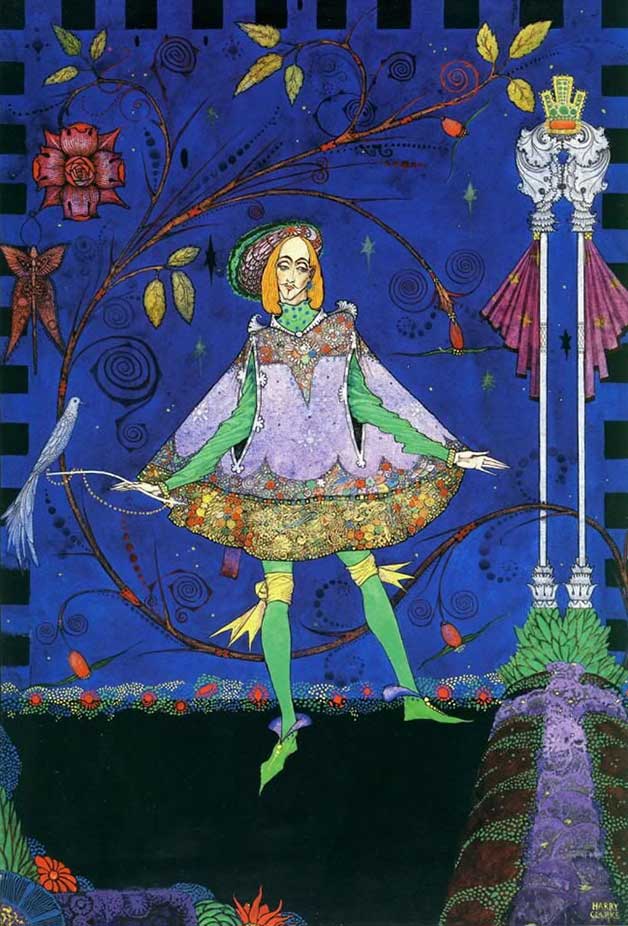 After the news had become somewhat stale, the question was asked, “Who is the king going to marry?” To which the barber made reply, that probably “he would marry a woman.”

“A woman!” exclaimed his hearers. “Why, what else could he marry?”

“Not all women are worthy the name,” answered the barber. “Some more resemble the unbaptized, of whom I say, abernuncio.”

“But what mean you, good friend?” demanded his customers. “Is not the king to find a woman for wife in our land of Spain?”

“He would,” replied the barber, “with greater ease find the reverse; but to find a woman worthy to be his wife I shall have great trouble.”

“What, you?” exclaimed all of them. “What have you got to do with providing the king with a wife?”

“I am under royal licence, remember,” said he of the razor; “for I am the only man in the kingdom permitted to rub the royal features. I am the possessor of the magic mirror also, into which if any woman not being thoroughly good shall look, the blemishes on her character will appear as so many spots on its surface.”

“Is this one of the conditions?” asked all.

“This is the sole condition,” replied the barber, placing his thumbs in the armholes of his waistcoat and looking very wise.

“But is there no limit as to age?” they again inquired.

“Any woman from eighteen years upwards is eligible,” said the possessor of the mirror.

“Then you will have every woman in Granada claiming the right to be queen!” all exclaimed.

“But, first of all, they will have to justify their claim, for I will not take any woman at her word. No; she will have to gaze into the mirror with me by her side,” continued the barber.

The sole condition imposed on those who desired to become Queen of Granada was made known, and was much ridiculed, as may naturally be supposed; but, strange to say, no woman applied to the barber to have a look into the mirror.

Days and weeks went by, but the king was no nearer getting a wife. Some generous ladies would try and prevail on their lady friends to make the trial, but none seemed ambitious of the honour.

The king, be it known, was a very handsome man, and was beloved by all his subjects for his many virtues; therefore it was surprising that none of the lovely ladies who attended court should try to become his wife.

Many excuses and explanations were given. Some were already engaged to be married, others professed themselves too proud to enter the barber’s shop, while others assured their friends that they had resolved on remaining single.

The latter seem to have been cleverer in their excuses, for it was soon observable that no man in Granada would marry, assigning as a reason for this that until the king was suited they would not think of marrying; though the real cause may have been due to the objection of the ladies to look into the mirror.

The fathers of families were much annoyed at the apparent want of female ambition in their daughters, while the mothers were strangely silent on the matter.

Every morning the king would ask the barber if any young lady had ventured on looking into the mirror; but the answer was always the same—that many watched his shop to see if others went there, but none had ventured in.

“Ah, Granada, Granada!” exclaimed the king; “hast thou no daughter to offer thy king? In this Alhambra did my predecessors enjoy the company of their wives; and am I to be denied this natural comfort?”

“Royal master,” said the barber, “in those days the magic mirror was unknown and not so much required. Men then only studied the arts, but now is science added to their studies.”

“You mean, then,” asked the king, “that an increase in knowledge has done no good?”

“I mean more than that,” continued the barber; “I mean that people are worse than they used to be.”

“‘God is great!’ is what these walls proclaim; to know is to be wise,” urged the king.

“Not always, sir,” said the barber; “for the majority of men and women in the present know too much and are not too wise, although some deem them wise for being cunning. There is as great a distance between wisdom and cunning as there is between the heavens and the earth.”

“Barber,” shouted the king, “thou shalt get me a wife bright as the day, pure as dew, and good as gold—one who shall not be afraid to look into thy magic mirror!”

“Sir,” replied the barber, “the only magic about my mirror is that which the evil consciences of the ladies of Granada conjure up. The simple shepherdess on the mountain side would brave the magic power of any mirror, strong in the consciousness of innocence; but would you marry such a lowly one?”

“Such a woman is worthy to be a queen, for she is a pearl without price,” answered the king. “Go, bid her come here; and, in the presence of my assembled court, let the gentle shepherdess look into the mirror, after thou hast told her of the danger of so doing.”

The barber was not long in bringing the shepherdess to court with him; and it having been proclaimed throughout the city that the trial was going to be made, the principal hall was soon filled with all the grand ladies and knights of the king’s household.

When the shepherdess entered the royal presence she felt very shy at being surrounded by so much grandeur; but she knew enough about her own sex to understand that they inwardly considered her not quite so ugly as they audibly expressed her to be.

The king was very much pleased with her appearance, and received her very kindly, telling her that if she desired to be his wife she would have to gaze into the magic mirror, and if she had done aught which was not consistent with her maidenly character, the mirror would show as many stains on its surface as there might be blemishes on her heart.

“Sir,” replied the maiden, “we are all sinners in the sight of God, they say; but I am a poor shepherdess, and surrounded by my flock. I have known what it is to be loved, for, when the sheep have perceived danger, they have come to me for protection. The wild flowers have been my only ornament, the sky almost my only roof, and God my truest and best friend. Therefore, I fear not to look into that magic mirror; for although I have no ambition to become queen, yet am I not lacking in that pride which is born of the desire to be good.”

Saying which, she walked up to the mirror and gazed into it, blushing slightly, perhaps at the sight of her own beauty, which before she had only seen portrayed in the still brook.

The court ladies surrounded her; and when they saw that the magic mirror showed no stains on its surface, they snatched it from her, and exclaimed—

“There is no magic in it—a cheat has been put on us!”

But the king said—

“No, ladies; you have only yourselves to thank. Had you been as innocent as this shepherdess, who is going to be my queen, you would not have dreaded looking into the mirror.”

After the marriage the barber was heard to say, that as the magic mirror had now lost its virtue, who could tell but what this charm might be restored to Granada?