There was once upon a time a King who had two sons, and these sons went a-hunting in the forest and there lost themselves. They wandered on and on for twelve weeks, and at the end of the twelve weeks they came to a place where three roads met, and the elder brother said to the younger, “My brother, here our roads part. Take thou the road on that side, and I’ll take the road on this.” Then the elder brother took a knife and stuck it into the trunk of a maple-tree by the roadside, and said, “Look now, brother, should any blood drip from the blade of this knife it will be a sign that I am perishing, and thou must go and seek me; but if any blood flow from the handle, it will be a sign that thou art perishing, and I will then go and seek thee.” Then the brothers embraced each other and parted, and one went in one direction and the other went in the other.

The elder brother went on and on and on till he came to a mountain so high that there cannot be a higher, and he began climbing it with his dog and his stick. He went on till he came to an apple-tree, and beneath the apple-tree a fire was burning, and he stopped to warm himself, when an old woman came up and said to him, “Dear little gentleman! dear little gentleman! tie up that dog lest he bite me.” So he took the dog and tied it up, and immediately he was turned to stone, and the dog too, for the old woman was a pagan witch.

Time passed, and the younger brother came back to the maple-tree by the cross-roads and saw that blood was dripping from the blade of the knife. Then he knew that his brother was perishing, and he went in search of him, and came at last to the high mountain that was higher than all others, and on the top of this mountain there was a little courtyard, and in the courtyard an old woman, who said to him, “Little Prince, what brings thee hither, and what dost thou seek?”––“I seek my brother,” said he; “a whole year has passed since I heard of him, and I know not whether he be alive or dead.”––Then she said to him, “I can tell thee that he is dead, and it is of no use seeking for him, though thou goest the wide world over. But go up that mountain, and thou wilt come to two other mountains opposite to each other, and there thou wilt find an old man, who will put thee on thy way.”

So he went up the high mountain till he came to two other mountains that were opposite each other, and there he saw two old men sitting, and they asked him straightway, “Little Prince! little Prince! whither dost thou go, and what dost thou seek?”––“I am going in search of my brother,” said he, “my dear elder brother who is perishing, and I can find him nowhere.”––Then one of the old men said to him, “If thou canst scale those two mountains yonder without falling, I’ll give thee all that thou dost want.” Then he scaled the two mountains as nimbly as a goat, and the old man gave him a bast rope, three fathoms long, and bade him return to the mountain where was the fire and the old woman who had asked him to stay and warm himself, and bind this old woman with the cord and beat her till she promised to bring his brother back to life again, and not only his brother but a Tsar and a Tsaritsa and a Tsarivna, who were also turned to stone there. “Beat her till she has brought them all to life again,” said they. So he took the cord and went back to where the fire was burning. An apple-tree was there, and beneath the apple-tree was the fire, and the old witch came out to him and said, “Little master! little master! let me come and warm myself.”––“Come along, little mother!” cried he; “come and warm thyself and make thyself comfortable.” Then she came out, but no sooner had she done so, than he threw the cord around her and began flogging her. “Say,” cried he, “what hast thou done with my brother?”––“Oh, dear little master! dear little master! let me go, let me go! I’ll tell thee this instant where thy brother is.” But he wouldn’t listen, but beat her and beat her, and held her naked feet over the fire, and toasted and roasted her till she shrivelled right up. Then he let her go, and she went with him to a cave that was on that mountain, and drew from the depths of it some healing and life-giving water, and brought his brother back to life again, but it was as much as she could do, for she was half dead herself. Then his brother said to him, “Oh, my dear brother, how heavily I must have been sleeping! But thou must revive my faithful dog too!” Then she revived the faithful dog, and she also revived the Tsar and the Tsaritsa and the Tsarivna, who had been turned to stone there. Then they left that place and when they had gone a little distance, the elder brother bowed to the ground and went on his way alone.

He went on and on till he came to a city where all the people were weeping and all the houses were hung with black cloth. And he said to them, “Why do ye weep, and why are all your houses hung with black?”––And they answered, “Because there’s a Dragon here who eats the people, and it has come to such a pass with us that to-morrow we must give him our Princess for dinner.”––“Nay, but ye shall not do this thing,” said he, and, with that, he set out for the cavern where the Dragon lived, and tethered his horse there and slept by the side of the cavern all night. And the next day, sure enough, the Princess was brought to the mouth of the cavern. She came driving thither in a carriage and four and with a heyduck in attendance. But when the Prince saw her, he came forth to meet her and led her aside and gave her a prayer-book in her hand, and said to her, “Stay here, Princess, and pray to God for me.” Then she fell down on her knees and began to pray, and the Dragon popped one of his heads out of the cavern and said, “It is time I had my dinner now, and there’s not so much as a breakfast here!” 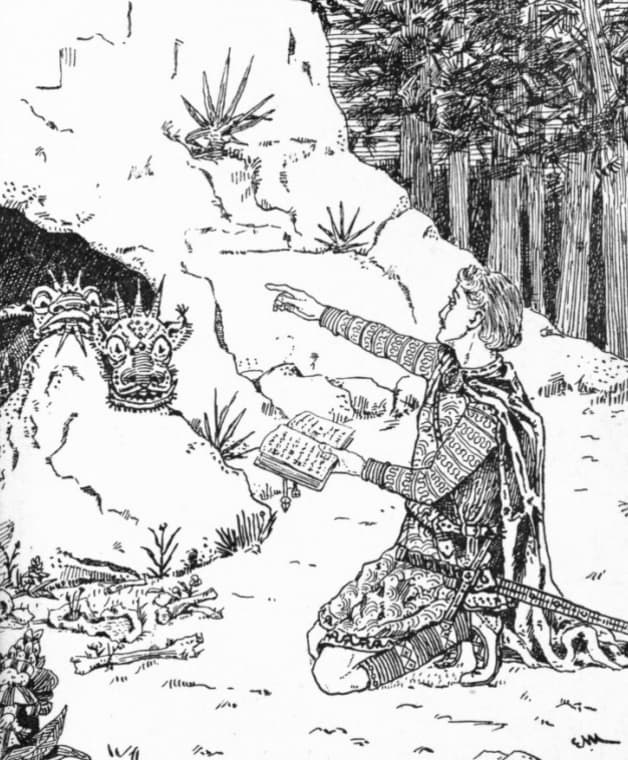 “But the prince also fell down to his knees and read out of his prayer-book.” Illustration by Noel L. Nisbet, published in Cossack Fairy Tales by Robert Nisbet Bain (1894), Lawrence and Bullen.

But the Prince also fell down on his knees and read out of his prayer-book and prayed to God, and said to the Dragon, “Come forth! come forth! and I’ll give thee breakfast and dinner at the same time!” Then the Dragon darted back again, but when he had waited till midday and still there was neither breakfast nor dinner for him, he popped two of his heads out and cried, “It is high time I had my dinner, and still there is neither breakfast nor dinner for me!”––“Come forth, and I’ll give thee both at once!” cried the Prince. Then the Dragon wouldn’t wait any longer, but stuck out all his six heads and began to wriggle out of the cavern; but the Prince attacked him with his huge broadsword, a full fathom long, which the Lord had given him, and chopped off all the Dragon’s six heads, and the rock fell upon the Dragon’s body and crushed it to pieces.

Then the Prince gathered up the six dragon-heads and laid them on one side, and cut out the six lolling tongues and tied them in his handkerchief, and told the Princess to go back to her palace, for they could not be married for a year and twelve weeks, and if by that time he did not appear, she was to marry another, and with that he departed. Then the coachman of the Princess came up to the place and saw the six heads of the Dragon, and took them up and said to the Princess, “I will slay thee on the spot if thou dost not swear to me twelve times that thou wilt say I slew the Dragon, and wilt take me for thy husband!” Then she swore to it twelve times, for else he would have slain her. So they returned together to the town, and immediately all the black cloth was taken off the houses and the bells fell a-ringing, and all the people rejoiced because the coachman had killed the Dragon. “Let them be married at once!” cried they.

Meanwhile the King’s son went on and on till he came to that town where he had left his brother, and there he found that the Tsar and the Tsaritsa had given his brother the whole tsardom and the Tsarivna to wife as well, and there he tarried for a time; but toward the end of a year and twelve weeks he went back to the other city where he had left the Princess, and there he found them making ready for a grand wedding. “What is the meaning of all this?” asked he. And they answered, “The Tsar’s coachman has slain the Dragon with six heads and saved the Princess, and now he is to be married to her.”––“Good Lord!” cried he, “and I never saw this Dragon! What manner of beast was it?”––Then they took him and showed him the heads of the Dragon, and he cried, “Good Lord! every other beast hath a tongue, but this Dragon hath none!”

Then they told this to the coachman, who had been made a Prince, and the coachman was very angry and said, “Whoever maintains that a Dragon has tongues, him will I order to be tied to four wild horses, and they shall tear him to pieces on the open steppe!” The Princess, however, recognized the King’s son, but she held her peace. Then the King’s son took out his handkerchief, unrolled it, showed them the six tongues, and put each one into one of the six mouths of the Dragon’s six heads, and each of the tongues began to speak and bid the Princess say how the matter went. Then the Princess told how she had knelt down and prayed out of the prayer-book while the King’s son slew the Dragon, and how the wicked coachman had made her swear twelve times to that which was false. When the Tsar heard this, he immediately gave the Princess his daughter to the King’s son, and they asked him what death the wicked coachman should die. And he answered, “Let him be tied to the tails of four wild horses, and drive them into the endless steppe that they may tear him to pieces there, and the ravens and crows may come and pick his bones.”

The Origin of the Mole

The Origin of the Mole