A boy of twelve years, named Enrique, was taking a walk one day in the outskirts of his village. He was very sad because his little sister was ill and the doctors said she would soon die. “Poor Luisa!” exclaimed the boy sobbing. “So pretty and to have to leave this world so soon! ”

Enrique sat down on some stones to weep over his sorrow, and there prayed to heaven for his sister’s life. A kid which was grazing near the spot heard the sound of his lamentations and drawing near the disconsolate boy said: “Calm yourself and I will try and save Luisa.”

“How?” asked Enrique, startled at hearing the kid speak.

“You have the remedy within reach of your hand. Look there, to the right in that spring, and you will see a ring which was left there and forgotten by the magician Agrajes. Put it on and ask to go to the Garden of Health, and immediately it will take you there. Ask there for the Blue Ivy whose juice will cure your sister, and if they deny it to you, use the ring and you will see.”

“Ay, little kid, anything to please you. Will you tell me who you are?”

“Well, you can see: a kid with its horns and all.”

“That is because I am a well-bred and compassionate kid. Anyway, I cannot tell you who I am. If you are grateful you will know. Meanwhile, don’t lose time, and do what I tell you.”

Enrique saw, indeed, a gold ring which was on the edge of the spring: he seized it and on it saw certain mysterious signs engraved. He put it on the ring finger of his left hand, and said in a loud voice: ” To the Garden of Health.”

Scarcely had he finished saying these words than a cloud descended and carried him through the air at lightning speed. In a few minutes he found himself at the gates of a beautiful garden surrounded by a silver fence with golden ornaments. At the gate there were two maidens, one in white and the other in black. The one in white had a fresh and smiling face; the other was sad and taciturn. The former carried an apple in her hand, the latter bore a scythe.

“Who are you?” asked Enrique.

“I am Life,” said the first. I, Death,” replied the second in dismal tones. “What have you come here for ?” they asked the boy. ” I have come for a branch of Blue Ivy to cure my sister with.”

“I cannot give it to you without the permission of this maiden,” said Life, motioning towards Death.

“I will not permit it, because Luisa belongs to me. She is a prize which Iwill not give up,” growled Death angrily. Life smiled sadly and turning to Enrique said: ” I cannot give you what you wish, but bear in mind that you can take it without my giving it to you.”

“Well, then, I will enter, cost what it may,” exclaimed the boy.

“You shall not enter alive,” shouted Death, brandishing her scythe.

“Oh, yes, he will, if he is quick/’ said Life provoked. ” Do not meddle with this boy who is mine for many years.”

Enrique jumped over the threshold of the garden gate and Death dealt him a terrible blow with her scythe, which would have deprived him of existence if at that moment Life had not made him smell the apple which she held in her hand and which quite cured him. So Enrique passed between Life and Death into the Garden of Health and once inside commenced his quest in order to see if he could find the famous ivy which was to cure his little sister. It was difficult to find it among so many and such different plants as filled that beautiful garden where was medicine for every illness; but Enrique was resolved to find it, and passed through, one after another, the avenues of trees which crossed the park of health in all directions.

“I am the Red Celery, that cures all chest diseases,” said a highly coloured celery plant bowing to Enrique.

“And I am the Spanish Onion, that cures the kidneys.”

“And I am the Valerian, that cures the nerves.”

“And I this, and I the other,” cried the other plants and trees.

“That’s enough! ” shouted Enrique, ” otherwise you will drive me mad.”

“I cure madness,” cried a shrub from the bottom of the garden.

“What I want is the Blue Ivy,” exclaimed the boy.

“Here I am,” cried the plant alluded to, but I am kept closely guarded.”

Enrique searched everywhere, without ascertaining where the precious plant was, but he always seemed to hear the noise in different places. The trees laughed at Enrique’s despair. “And who keeps you so hidden?” said Enrique, stopping still for a moment.

“Death hides me in order that you may not find me. You have passed near and have not seen me. Your sister will die if you cannot find me.”

Enrique now did not know what to do, until he presently remembered his ring. “Ring of Agrajes, I want to see the Blue Ivy,” he exclaimed. Instantly he saw, within reach of his hand, a lovely ivy that, clinging to an oak, displayed beautiful leaves to the winds. “Do not cut me now,” cried the Ivy, ” because your sister is going to die, and you will not arrive in time. Death is now close to her bedside.”

“Ring of Agrajes” exclaimed Enrique at once, “bring Death to me tied up.” Hardly had he finished saying it than Death appeared quite dishevelled, without her scythe, her elbows tied together like a criminal. All the health giving plants began to applaud.

“Bravo, bravo!” they cried. “Don’t spare her; she is our enemy!” shouted some. “Don’t let her go, and the world will be grateful to you! ” said others.

“What have you done to my sister t ” said Enrique, angrily.

“Nothing yet, but as soon as you let me go you will see,” answered Death.

Well, if you wait until you are free before killing her, my little sister will die of old age. Ring, give this shameful woman a thrashing.”

Immediately a number of sticks came through the air and commenced to bestow a fine thrashing upon Death. The latter screamed like a mouse whose tail has been trodden on, and heaped insults on the boy, threatening to kill him as soon as she was free.

“Do not spare her ! ” said Enrique at each insult. And the blows again descended on Death like rain. One knocked an eye out, another knocked all her teeth out, although it must be admitted they were false, and another took her hair out by the roots, leaving her head quite bald. Then Enrique cut a sprig of the Ivy and said to the ring, “Take me to my sister’s side.”

Immediately he found himself at the bedside, where all the family were weeping over the approaching death of the girl. ” Here is something which will cure my little sister,’ said the boy. And drawing near her, he squeezed into her mouth the juice of the fresh ivy he had plucked in the Garden of Health.

The girl at once opened her eyes and called her mother, and, amidst the general surprise, asked to be dressed. The family would not do so until the doctor said that indeed she was well and sound. They all complimented Enrique enthusiastically, until at length the boy said: ” All this is due to a kid, and I must go and thank her.”

He went to the same place where he had met the kid, but did not see her. In vain he ran about in all directions. But he had not got the ring of Agrajes for nothing. ” Ring’ he said, “bring me the kid that was here a short time ago.”

And the kid appeared. “What do you want of me, Enrique? ” asked the animal.

“To thank you, and to ask how I may serve you,” answered Enrique.

“I see that you are grateful, and I wish you to know who I am. I am called Atala, and am the daughter of Agrajes, the magician. I put my father’s ring beside you with the object that you might be able to save your sister.”

“I should like to know you in your real form and not in that of a kid.”

“Well, here I am,” exclaimed Atala. 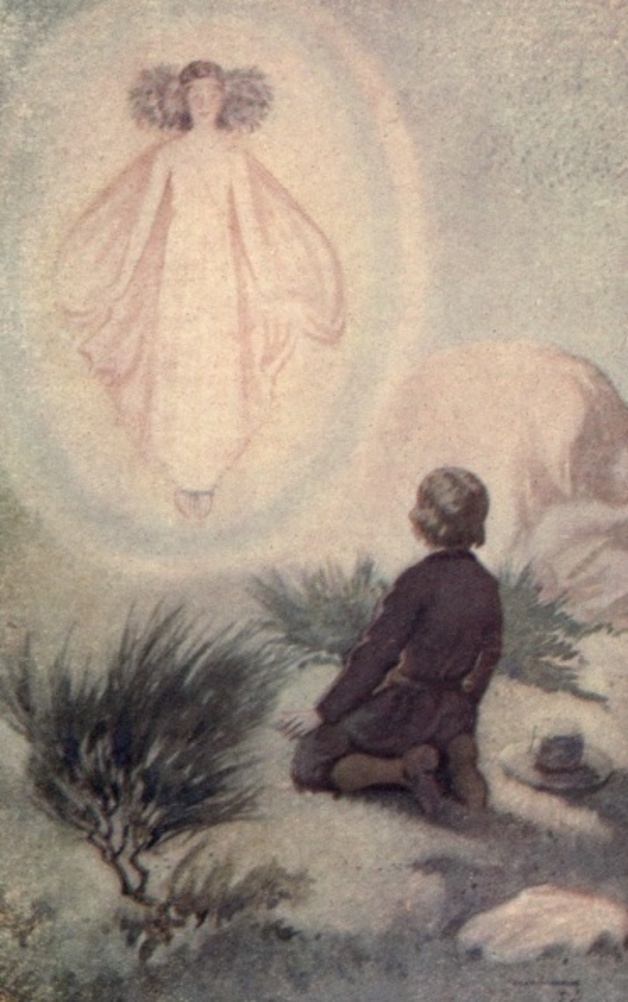 “She transformed herself into a lovely girl.” Illustration by W. Matthews, published in Fairy Tales from Spain by Jose Munez Escomez (1913), J.M Dent and Sons.

And thereupon she transformed herself into a lovely girl of more or less Enrique’s age. “How pretty you are ! ” exclaimed the boy. “Come home and play with my little sister, who is now quite well, thanks to you.”

“I can deny you nothing while you wear this ring,” answered the girl.

Atala disappeared at once, and when Enrique thought she had gone never to return, she reappeared smiling, and said: ” I have been for a moment to ask my father’s permission to accompany you.” They went to Enrique’s house together, and he introduced her to his parents as Luisa’s saviour. They feted her with cakes and sweets, and on saying good-bye she promised to come back every afternoon to play with her little friends. One day Agrajes himself visited Enrique’s home, to make the acquaintance of the family of which his daughter spoke so much, and on going away he touched in a special way an old chest. “Open it, presently/’ he said on saying farewell. On opening it they found it full to the brim of gold coins.

On it there was apaper which said: “A present from Agrajes to two very nice children.” With that money Enrique followed his career and Luisa had a splendid dowry, and with that and the love of their parents and friends they were two very happy beings.

Prev Story The City of Fortune
Next Story