An exhaustive history of North American folklore, Myths And Legends Of Our Own Land was authored by Charles Montgomery Skinner, who often was credited as CM Skinner. Born in 1852, CM Skinner came to Brooklyn, New York from Hartford, Connecticut, working as an American writer and folklorist. He had a diverse writing career working as the editor of The Brooklyn Daily Eagle, as a well as an dramatic and art critic for the paper for 15 years. Before working for The Brooklyn Daily Eagle, CM Skinner was a writer for The Brooklyn Times. He also authored a collection of works including plays and books on gardening. Viewed as an educational expect by his peers, CM Skinner was termed “the myth and legend man” from The New York Times. 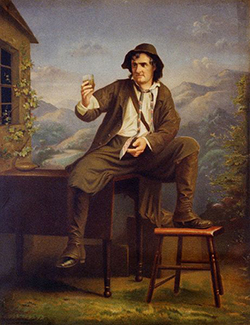 The Myths and Legends of Our Own Land consisted of nine volumes and featured stories from across the United States, with each book consisting of a region, such as the Hudson Valley, Martha’s Vineyard and Nantucket, and more. CM Skinner saw value in the United States’ history, and didn’t want them to be lost to the ages, so he collected these folk tales, which include stories from the Indian tribes, religious histories, and more. Among the tales that will be recognized by readers of the collection is the story of Rip Van Winkle. CM Skinner died at age 55 in 1907.