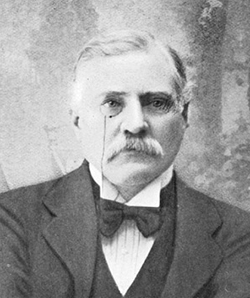 Edmund Leamy was born in Waterford in 1848 and served as a Member of Parliament (MP) in the House of Commons of the United Kingdom of Great Britain and Ireland until his death in 1904. He also was an editor of the newspaper United Ireland, which was owned by Charles Stewart Parnell. Despite Leamy’s political endeavors, he was also a talented folklorist and poet. His first collection of Irish folklore, Irish Fairy Tales, was published in 1889.

The preface of Irish Fairy Tales was penned by J.E Redmond, a fellow Irish politician nationalist. In it, Redmond refers to Leamy as “one of the most brightest and most poetic spirits who have appeared in Ireland in the last half century.” Redmond goes on to say that Leamy loved every inch of his country, and the tales that surrounded it, often living in “his youth.” He also laments that politics prevented the author from creating even more magic and myth for generations, but that we’re very blessed to see the “rare power of poetic expression” Leamy has left for us.

Irish Fairy Tales was republished in 1906 by M.A. Gill & Son, Ltd, Dublin to honor Leamy after his death. The introduction for the volume emphasizes that Leamy wrote for children to entertain them, and not with a literary critic in mind. It’s with this spirit that Leamy endows all of his tales with a magic anyone can appreciate.