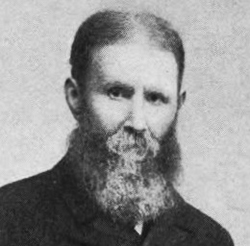 Jeremiah Curtin was a folklorist and and translator from America. Born in Detroit, Michigan, in 1835, he had a poor childhood in Wisconsin as the eldest of eight children. After his father died, he sold his shares of the farm to finance his education at Harvard. It was there that he first studied folklore, and when he graduated, he moved to New York City, and eventually traveled to Russia. On a trip to Wisconsin, he met his future wife, Alma, and the two traveled to Russia, writing and traveling.

The duo traveled back to the States, and began ethnographical work in California, and Curtin began translating Polish works, however, one of his greatest interests was folklore and this would culminate into several collections of folk tales. While Alma wrote with him, Curtin rarely gave her credit, thus all of their works are in his name. Their collections included Myths and Folk-Lore of Ireland, Myths and Folk-Tales of the Russians, Western Slavs and Magyars, Hero Tales of Ireland, and more. They would collect these tales from local residents of the areas they traveled in, and then mark them down for generations to enjoy. After her husband’s death in 1906, Alma published several books based on his notes and their travels. The epitaph of his gravestone was written by Theodore Roosevelt and claims Curtin spoke over 70 languages.