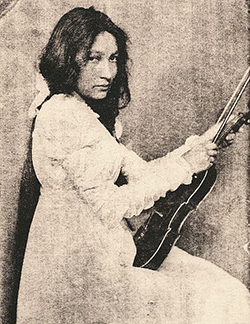 Photograph of Zitkala-Ša by Gertrude Käsebier, 1898.

Zitkala-Ša (which means “Red Bird”), the author of Old Indian Legends, was a Sioux writer and musician who worked to preserve her native heritage, including collaborating with publisher Ginn and Company on this collection of Native American stories from multiple tribes. She was born February 22, 1876 in South Dakota, and spent most of her childhood on the Yankton Indian Reservation, however, in 1884, she was removed from the reservation for education by missionaries. Zitkala-Ša along with two other children, were taken to White’s Manual Labor Institute, a school founded by Quaker Josiah White. It was at his school that Zitkala-Ša first saw how important it was to preserve her heritage, including the Native American folk tales. Her long hair cut to match the Quaker style, she was to spend her days praying and doing chores. In 1887, she left the school, yet returned in 1891. She was taught to read, write, and play music, pasttimes she enjoyed, and would later chronicle in the book The School Days of an Indian Girl, even becoming a teacher at one point after an instructor resigned. 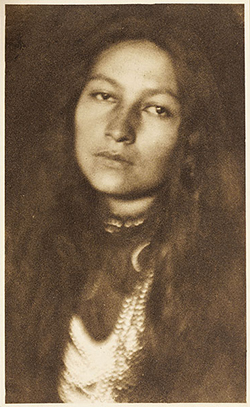 Photograph of Zitkala-Ša by Joseph Keiley, 1901.

Even though it was a rarity in those days, Zitkala-Ša attended Earlham College on scholarship in 1895. Throughout her education, she was an outspoken advocate on women’s equality, education, and the assimilation process where she saw Native women being reduced to housekeepers. She began collecting the Native American legends that would later appear in Old Indian Fairy Legends. First she would translate them to Latin, then to English. She had to leave the college due to her health but continued her educational pursuits, and would write pieces on the topic of Native American identity for Harper’s Bazaar and The Atlantic Monthly. Zitkala-Ša played violin with the New England Conservatory of Music in Boston for several years, and in 1899 she taught music at Carlisle Indian Industrial School in Pennsylvania. In 1901, she returned to the reservation to be with her family out of concerns for their welfare and her mother. This same year, the Indian folk tales collection Old Indian Legends was published.

Once back home, she worked at the Bureau of Indian Affairs at Standing Rock Indian Reservation as a clerk, and it was here she met her husband, Captain Raymond Bonnin. The two were married in 1901, and later they moved to Uintah-Ouray reservation in Utah. They worked with the Ute people for fourteen years, and she gave birth to her first child, Raymond Ohiya Bonnin. in 1910, she wrote a liberetto and the songs for an opera entitled The Sun Dance and it was the first opera co-authored by a Native American. Later in 1926, she founded the National Council of American Indians, and served as its president. She worked tirelessly lobbing on behalf of Native Americans for their rights in America until she died in 1938 in Washington, D.C. where she was buried in Arlington Cemetery as Gertrude Simmons Bonnin.