Peter Henry Emerson, better known as P.H. Emerson, was a prolific author of a diverse collection of books, and was also a renowned photographer. Born May 13, 1856 in Cuba, he was the child of an American father and British mother. Noted poet Ralph Waldo Emerson was a distant relation. Emerson grew up on his father’s estate, La Palma Estate, a sugar plantation, and also received schooling in Delaware, eventually moving to England to attend Cranleigh School in 1869 after his father passed away. In 1885, he earned his medical degree at Clare College in Cambridge. 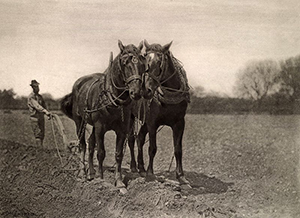 ‘At Plough, The End of the Furrow’. Scene of country life in East Anglia, England. Photograph by P. H. Emerson, 1887.

The product of wealth and an outstanding education, Emerson was eager to share his opinions. This led to many books, the first of which, Paul Ray at the Hospital: a Picture of Student Life , was published in 1882, he wrote it while on his honeymoon with his new wife Miss Edith Amy Ainsworth. Emerson is also known for his photographs celebrating nature, and he published books of his photography, including Life and Landscape on the Norfolk Broads. For him, photography was about capturing the simplicity of the world. While staying in Anglesey in the winter of 1891-1892, Emerson was told a number of stories about fairies by the Welsh people and wrote them down. Eventually he compiled a collection of fairy tales, Welsh Fairy-Tales and Other Stories. Nearly all of the stories collected within are concerned about the finding and loss of money. In his author’s note Emerson says he preferred to share the tales as is, and didn’t edit them for content. He would go on to write more about photography, and even began a history of the medium, completing it just within his death. He died one day before his 80th birthday on May 12, 1936.