While Canada was still a barren wilderness, there lived within sight of the Alaskan peaks, a Thinkleet, or Ogre, who was very selfish and cruel. At that time it was very dark and foggy, for there was no sun in the heavens; neither was there a moon, nor stars, nor any other heavenly bodies. A few wretched people groped about, living little better than the lizards that made their homes among the rocks. The Thinkleet, while once wandering in the cold north lands, met a maiden whose dazzling beauty shone forth even in the darkness. She consented to be his wife, and after they were married, he took her back to his humble lodge in Canada. Everyone wondered how it is that a rough, cruel, and selfish man often finds a wife that is good and beautiful. One look at her sweet, contented face filled them with cheer and courage. It is said that the Thinkleet was very jealous of her, and often punished her for beaming upon all people alike. “Why do you not save your sweet smiles for me alone?” he asked.

“Because I was sent into the world to spread joy and good will,” she replied sweetly. “I was not made for one person, and I will continue to treat all people the same.” The Thinkleet scolded her severely, but the harder he railed, the brighter she smiled. She waited upon him faithfully as he ate his supper, and quite wore away his anger with her gentle words and laughter. But as soon as the Thinkleet had gone out to hunt for food, she thrust her head through the doorway and smiled upon all the men that chanced to pass by. They gathered about her and gazed at her in admiration. Some one, of course, told the Thinkleet how his bride had been smiling upon the passersby during his absence, and again he scolded her roundly, saying that he would destroy her if she acted in such an unbecoming manner in the future. “You may bury me if you will,” she replied with a dazzling smile, “but you cannot kill me. No mortal can deprive me of life.”

The Thinkleet got a flock of red birds and gave them to his wife. She did not know that he had trained them to report to him all her actions while he was away from home, so she cared for them and called them her pets. No sooner was the Thinkleet out of sight than his beautiful wife went to the door and smiled on all the people that passed by. When he returned a few hours later, the red birds told him that his wife had smiled as sweetly upon all the neighbors as she had smiled upon him. Very much enraged, the Thinkleet seized her and put her in a wooden box. He fastened down the lid and stored it away in a room that was seldom used. But his sister, who was fond of his goodnatured wife, came in and begged him to set her free. Instead of granting his sister’s request, the wretch went to her cottage and slew all her children. Then he went back home and sat down to make excuses to himself for his rash act. The world was darker than ever. Without the smile of his gentle wife, he could scarcely see at all. Filled with terror, he groped his way to the inner room to find the box and set her free; but it was so dark that he could not find it. All the people around him began to wail aiid lament, for never before had there been such darkness in the land. Meanwhile the Thinkleet’s sister left her cottage and went out to the seashore, weeping bitterly. “Oh, what shall I do—what shall I do!” she moaned to the waves as they rippled against the beach. Suddenly a large number of fishes stuck their heads out of the water, and said: “Grieve not, good woman, for thou wilt have another child that will be greater than the Thinkleet. It is thy duty to make him a noble man.” So the woman dried her tears and traveled far away to a strange land, where she lived a quiet but useful life. A few years later she had another child, a bright, active boy whom she named Yehl. She became as happy as of old in teaching her son all that was helpful and noble. Yehl was a beautiful lad and as good as he was fair. He spent all his time making fires along the shore, that the people might be able to see each other. He also taught them how to use fire to cook their food. When he was old enough to use weapons, his mother sent him to where the Thinkleet lived, to set free his beautiful wife. 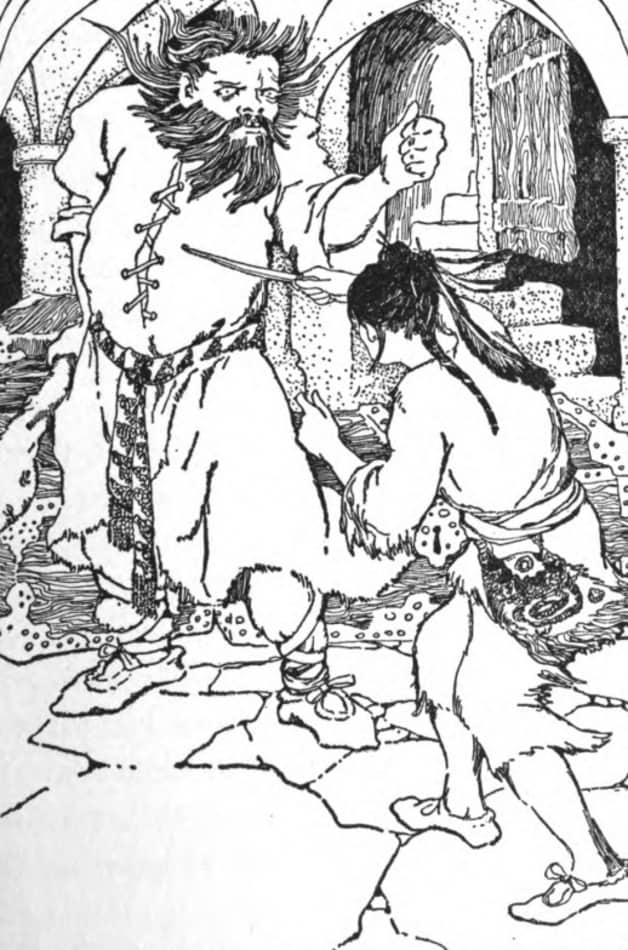 Yehl found the lodge of the Thinkleet dark and deserted, for the wicked creature was out fishing. He stole quietly in, and began to search for the hidden box. He finally touched a wooden surface, and at the same time he heard a groan. “I have come to set free my beautiful aunt!” he cried, very much excited. “And you will be killed by your uncle!’* shouted a gruff voice. Yehl drew his sword,—and just in time, for the Thinkleet had entered the lodge and was making for him with a spear and a club. For a long time they fought until Yehl, finding his strength giving out, made his escape. He waited for several days before again attempting to find the box. Finally he entered the lodge after the Thinkleet had gone out to catch fish. For a long time he groped about until his hands fell upon a rough wooden surface. His heart beat with expectation, although he was sure that the Thinkleet’s wife was no longer living. He fumbled with the lock and finally opened it. Instead of hearing a moan as before, a peal of laughter fell upon his astonished ears.

Then a wonderful thing took place, such as never has happened since. No sooner had the lid of the box been removed than a flood of light blinded Yehl for a moment. He rubbed his eyes and looked at the box, utterly astounded. The beautiful, smiling woman had turned into a flood of light that ascended heavenward to the sun, giving it the radiance that, since that time, has enlightened all the world. When the light fell upon Yehl, he became gifted with the power of magic. He found another box, which some folklore story-tellers say contained the former wives of the Thinkleet, and from their dark hiding place came forth the moon and the stars. They floated to their places in the skies and lighted the dark world at night. All the people were filled with awe. Yehl went among them to comfort those that were frightened. Those that had fled to the water he changed into fishes, others that had sought the forests he changed into birds, while still others were changed into deer and other graceful animals. The remaining people fell at his feet and hailed him as their deliverer. When the Thinkleet saw the beautiful face of his wife in the sun, he hid himself in a dark cave and never more returned to his home; for it is said that the wicked do not hke the hght. Yehl went throughout all the country doing all the good he could; but as long as he lived on earth, he loved the Goddess of Light who smiled upon him each day from her home in the sun.

The Peasant and the Satyrs

The Peasant and the Satyrs