Fairytalez.com » The Chinese Fairy Book » A Legend of Confucius

When Confucius came to the earth, the Kilin, that strange beast which is the prince of all four-footed animals, and only appears when there is a great man on earth, sought the child and spat out a jade whereon was written: “Son of the Watercrystal you are destined to become an uncrowned king!” And Confucius grew up, studied diligently, learned wisdom and came to be a saint. He did much good on earth, and ever since his death has been reverenced as the greatest of teachers and masters. He had foreknowledge of many things. And even after he had died he gave evidence of this. 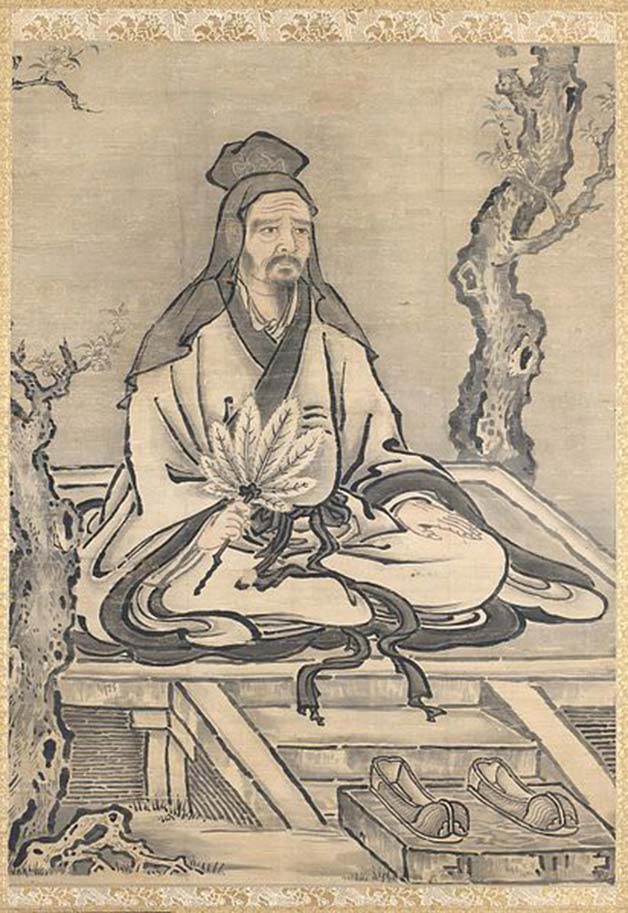 “Confucius and His Disciples Yanzi and Huizi at the “Apricot Altar””. Illustration by Kano Tan’yû. Mid-17th century.

Once, when the wicked Emperor Tsin Schi Huang had conquered all the other kingdoms, and was traveling through the entire empire, he came to the homeland of Confucius. And he found his grave. And, finding his grave, he wished to have it opened and see what was in it. All his officials advised him not to do so, but he would not listen to them. So a passage was dug into the grave, and in its main chamber they found a coffin, whose wood appeared to be quite fresh. When struck it sounded like metal. To the left of the coffin was a door, which led into an inner chamber. In this chamber stood a bed, and a table with books and clothing, all as though meant for the use of a living person. Tsin Schi Huang seated himself on the bed and looked down. And there on the floor stood two shoes of red silk, whose tips were adorned with a woven pattern of clouds. A bamboo staff leaned against the wall. The Emperor, in jest, put on the shoes, took the staff and left the grave. But as he did so a tablet suddenly appeared before his eyes on which stood the following lines:

O’er kingdoms six Tsin Schi Huang his army led, To ope my grave and find my humble bed; He steals my shoes and takes my staff away To reach Schakiu—and his last earthly day!

Tsin Schi Huang was much alarmed, and had the grave closed again. But when he reached Schakiu he fell ill of a hasty fever of which he died.

Note: The Kilin is an okapi-like legendary beast of the most perfected kindness, prince of all the four-footed animals. The “Watercrystal” is the dark Lord of the North, whose element is water and wisdom, for which last reason Confucius is termed his son. Tsin Schi Huang (B.C. 200) is the burner of books and reorganizer of China famed in history. Schakiu (Sandhill) was a city in the western part of the China of that day.

Prev Story The God of War
Next Story