Anyhow, there they were, skinning the soft yellow pulp, which does took nice, off the hard inside of the berry with their sharp little white teeth, and throwing the hard part at a kiwi wandering about below their tree, and thinking it great fun to watch his surprised face as he tried to dodge the berries. 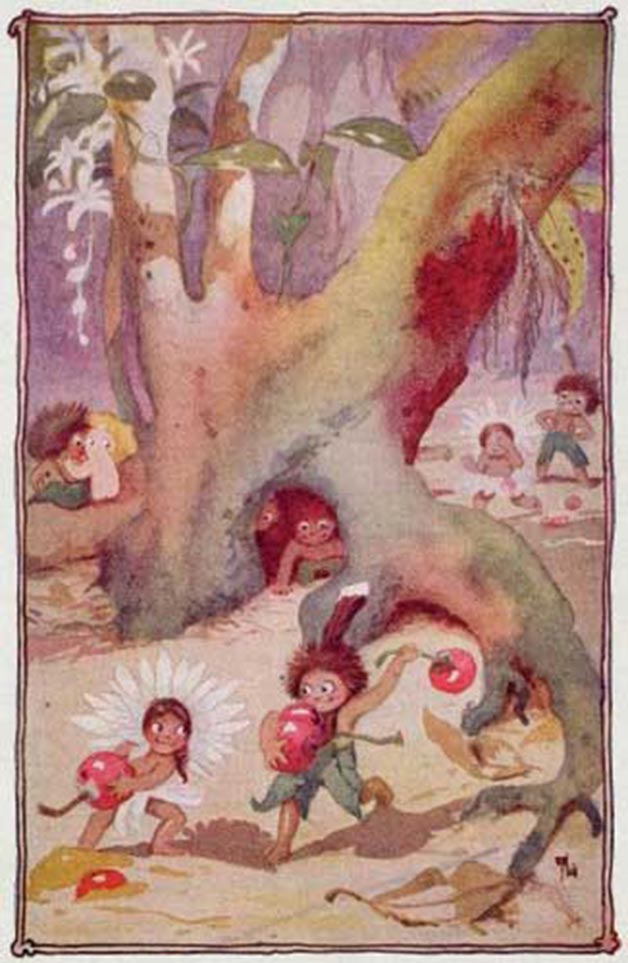 “So they all ran off and collected puriri berries.” Published in Piccaninnies by Isabel Maud Peacocke. Illustration by Trevor Lloyd. Whitcombe and Tombs Limited.

Swanki had just eaten her fourteenth berry and was reaching for the fifteenth, when she sighed discontentedly.

“Oh, Tiki,” she said, “aren’t you sick and tired of eating the same old foods for ever and ever? Berries—berries—berries! Roots—roots—roots! And only a few leaves that are worth eating.”

But Tiki was a contented little boy, and he couldn’t think of anything nicer to eat than a handful of ripe puriri berries, or the root of a young fern.

“But what else could we eat?” he asked, “There isn’t anything else!”

“Of course there is—lots and lots,” answered Swanki. “There’s mince pie and ham sandwiches and jam tarts and vinegar and plum duff and cakes and pickled cabbages.”

Tiki stared at Swanki in amazement; he had never even heard of these foods, and thought she must be wonderfully clever to know all about them.

Sly little Swanki did not tell him that she had lately been hidden in a hollow tree stump near a picnic party which had come into the bush, and that she had heard the people offering these strange foods to one another, and they sounded as though they might be more interesting than just berries—berries—berries—roots—roots—roots.

And that is always the way,—something we haven’t got always seems more worth having than the things we have.

When Tiki had recovered from his surprise he remembered one familiar word in Swanki’s list of things to eat, and as he was always ready to please, he said:

“Swanki, I don’t know where the mince pie and plum duff and—and vinegar trees grow, but I can show you the pickled cabbage trees all right.”

“Oh, Tiki, can you?” cried Swanki. “Then let’s go at once. I’m longing for some pickled cabbage.”

“It’s a long way,” said Tiki, doubtfully, “long, long way to go;” (though he’d never heard of the popular song, which shows how easy it must be to write those songs).

They slid down the tree, and having persuaded the kiwi to give them a lift, which was pretty cool of them, considering, they set off and travelled in fine style for some way.

But as they arrived near the edge of the bush and the trees grew thinner, the kiwi, who hates the open country for his own reasons, refused to go any farther, and the Piccaninnies had to get off and trudge the rest of the way on foot.

And crossing a little green glade they met Miss Fantail darting round and round the glade after flies. Now, Miss Fantail is a friendly and harmless little bird, but she’s the most inquisitive creature in the bush, and a regular little gossip.

The Piccaninnies knew that if she got wind of where they were going it would soon be all over the bush, and they made up their minds to dodge her. So they pretended to be little brown lizards crawling through the moss, but Miss Fantail wasn’t taken in for a moment, but flitted down to them and put her head on one side in her bright-eyed inquisitive way.

And when they wouldn’t answer she persisted in following them, flitting in her restless way from tree to tree, sometimes darting ahead of them, sometimes circling round them, and never ceasing to cry inquisitively:

On the very edge of the bush, however, she hesitated. She had been born in the bush, and was used only to its cool green shade, and the glare of the sun on the outside world rather scared her. So after hanging about for a time to see what the Piccaninnies intended doing, she flitted away after a large blue fly, and while she was busy Tiki and Swanki gave her the slip. They, too, had been rather dismayed at the glare of the sun and the shelterless look of the outside world, but Tiki said that the Pickled Cabbage trees were not far away; he had seen them once when he had climbed to the top of a rata tree, and a bush pigeon had told him the name of them.

So, shrinking a little and keeping a sharp look-out for enemies in case they had need to “drop dead” and pretend to be a dead stick or leaf, they ran on hand in hand, and came after a time to the edge of the swamp.

“There!” said Tiki proudly, “there are the Pickled Cabbage trees.”

There were quite a number of them, tall slim trees with long bare trunks and a crown of long, narrow leaves at the top.

“We must climb to the top to find the cabbages,” said Swanki; but though they had done a lot of climbing in their day, it was usually up trees with plenty of branches and twigs to help them.

They found it very hard to get a grip with their little, bare, brown knees on the long, smooth trunks, and Tiki frowned thoughtfully at his tree as he slid down for the fifth time.

“You give me a leg up first,” said Swanki, “and when I’m up I’ll give you one,” which was rather a silly thing to say when you come to think of it.

However, you can do most things if you try hard enough, and Swanki, seeing how the last year’s jackets of the cicadas, which they had quite grown out of, were clinging to the Cabbage trees with their tiny claws, slipped her hands and feet into a set of them and through this clever idea of hers was able to climb right up the trunk, followed by Tiki, who was busy all the time trying to explain that he had just been going to think of the plan himself.

When they were at last nestled in the crown of leaves they began to look about for the cabbages, but could find nothing resembling Swanki’s idea of a cabbage, which wasn’t very clear, but quite different from anything they found in that tree.

They nibbled some of the leaves which were bitter and stringy, and tried some of last year’s flowers, which were very little better, and then Swanki cried out in disappointment:

“You’ve played me a trick, Tiki. These are not cabbages.”

She gave him an angry little push, and to her surprise he fell backward out of the tree splash into the swamp, where she saw him struggling in the muddy water.

Very frightened Swanki hurried down the tree and ran to the edge of the water, where she held out her hands to Tiki who grabbed them tightly.

But just as she was drawing him to land the boggy piece of ground on which she was standing gave way, and she, too, fell into the water.

Luckily it was not very deep, and a friendly old frog gave them a leg up the bank, and very wet and muddy and miserable they started back for the bush.

The worst of it was that tiresome Miss Fantail had spread it all abroad that they had left the bush, and on the way home they met her and all her relations, and all the Piccaninnies too, setting out on a search party.

How they stared and questioned and teased the poor little tired travellers, standing before them so wet and grimy and weary, and when they had heard the whole story how they all laughed at Swanki and Tiki!