Fairytalez.com » John Theophilus Naaké » Carried Away by the Wind

A certain magician being angry with a young peasant, came to the hut where he lived and stuck a new and sharp knife under the threshold, repeating an incantation as he did so, accompanied by this wish: “May this peasant be seized and carried away by the wind into the air, there to remain for seven whole years.” 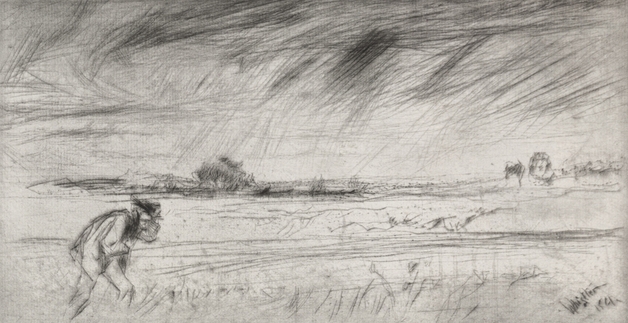 The peasant went into the fields to make hay, when all of a sudden a great wind arose. It scattered the hay over the field, and seized the peasant himself. In vain he struggled, in vain he caught hold with his strong arms of hedge or branch of tree, the invisible power lifted him up and carried him away.

Borne, as if on the wings of the wind, among the clouds, he flew like a wild pigeon. The sun began already to disappear in the west, and the hungry peasant could see the smoke ascending from the cottages in his village, where supper was cooking. At one time he could almost touch the chimney pots with his feet, and he screamed aloud for help. But he screamed and wept in vain; no one heard his cries, or saw his bitter tears.

He was thus carried about in the air for nearly three months, and by that time, from hunger and thirst, had become dried up like a piece of wood. He travelled over a large part of the world, but the wind carried him chiefly over the village where he had lived.

With tears in his eyes he would look on the hut where dwelt his betrothed. He would see her coming out with dinner for some one of the family. He would spread his thin, cold arms towards her, and call her by her name. His voice would die in his throat, while the girl would not even look up.

Away and away the peasant was borne by the wind. Presently he saw the cruel magician standing before his own house. The magician looked up and shouted to him:

“Ah, I have not done with you yet; you shall be thus carried by the wind over your own village for seven long years. You shall suffer constantly, and wish you were dead; but you shall not be able to die.”

“Oh, my little father, my master, forgive me if I have offended you!” cried the poor fellow from above. “Look at me; see, my mouth is as dry as a chip! Look at my face and hands—the flesh is gone from them, and the bones only are left! Have mercy upon me!”

The magician whispered a few words, and the peasant stopped in his circular motion, and remained still in the air.

“It is all very well to ask my pardon; but what will you promise to give me if I let you down?”

“All that you ask for,” cried the poor peasant; and he put his hands together as in supplication, and knelt down in the air.

“Will you give me your sweetheart?” demanded the magician. “I want her for my wife. If you will promise to give her to me, I will let you come down once more to the earth.”

The peasant was silent for a moment. Thought he to himself: “When I am once more on the ground. I’ll see what can be done.” He therefore called out to the magician,—

“Oh, master! you ask a great sacrifice from me; but if it cannot be otherwise, let it be as you will.”

Hereupon the magician blew upon him, and he came down to the ground. Oh, how happy he was when he felt that he could walk, and that the wind had no more power over him!

He hastened home. Before the door he met his betrothed. At the sight of her long lost lover, over whose fate she had often wept, the astonished girl cried out with surprise. The peasant pushed her gently aside, and went into the house. There he saw the farmer who employed him, and said to him, with tears in his eyes,—

“I cannot serve you any longer, nor can I marry your daughter. I love her as dearly as my sight, but she can never be mine.”

The countryman looked at him in wonder, and seeing how sorrowful was his thin, pale face, formerly so fat and rosy, he asked the reason why he refused to marry his daughter.

The peasant told him all: his journey in the air, and the promise he had made the magician. The farmer, having heard him out, bade the poor fellow be of good cheer. He then took a purse full of money, and went to a witch for advice. When he returned in the evening, he was smiling and happy, and said to the peasant,—

“Go to-morrow, before daylight, to the witch, and all will be right.”

The peasant, weary as he was, went to bed, and soon fell fast asleep. He got up, however, before daylight, and went to the witch. He found her crouching before a fire burning herbs. The witch told him to stand quietly by. The morning was calm and beautiful, but suddenly a strong wind arose, and made the hut tremble. Then the witch took the peasant into the yard, and told him to look up. He raised his eyes and saw the wicked magician, with nothing on but his night-shirt, whirling round and round in the air.

“There is your enemy,” said the witch; “he will hurt you no more. If you wish him to see your wedding, do as I will tell you. For the rest, he will suffer the same punishment as he had designed for you.”

The delighted peasant ran back home. In a month’s time he was married. When the guests were dancing at his wedding, the peasant went into the yard, looked up, and saw above the hut the magician spinning round and round in the air. He took a new knife, and aiming at the magician, threw it with all his might. The magician fell down, and then it was seen that he was nailed by the foot to the ground; thus he was obliged to stand by the window, a miserable witness of the happiness of the peasant and his friends.

On the following morning the magician had disappeared from before the hut. Some people said they saw him flying through the air over a large lake some miles off; before and behind him were large flocks of crows, which, by their croaking, told of his continued flight through space.

The Bad Little Girl of Acoma

The Bad Little Girl of Acoma